Marxism is dead; long live Georgism! With Britain in austerity mode, its government pre-emptively decommissioning aircraft carriers that haven’t been built yet and preparing to bounce a half-million public-sector employees, everybody is looking for policy solutions to make the state’s in-flow exceed its out-go with the least possible agony. That has some progressives, including the Liberal Democrat Business Secretary Vince Cable, looking at the notion of Land Value Taxation (LVT)—applying the new tax burdens not to capital and labour income, which would discourage work and investment, but to the unimproved value of land area, where, to a first approximation, it would merely encourage efficient land use and make it more affordable.

As the Spectator‘s James Forsyth points out, LVT is an “eye-catching” policy that the Conservatives, if only for cultural or spiritual reasons, would be unlikely to adopt. (They’ll still be the party of the great country houses long after the last one is reduced to ashes and its occupants sent to the salt mines of Gliese 581g.) The Lib Dems will need distinctive policies to help preserve their identity after years of helping the Conservatives govern. 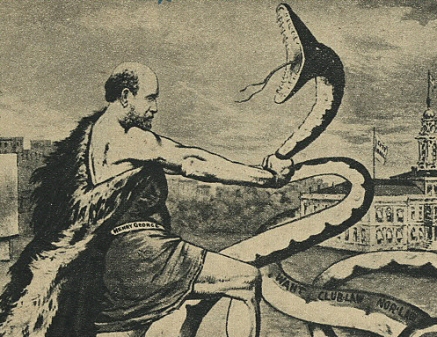 When Henry George fought for the “single tax” on land in the 19th century—becoming a mirror-image Marx, a preacher of land-labour rivalry rather than capital-labour rivalry—he grew to be one of the world’s most popular orators and social theoreticians. His philosophy brought together liberal modernizers, non-revolutionary radicals, and the literate working class; it was attractive to a broad spectrum of opinion between the Marxian socialists (plus the anarchists) and the great estates (plus their sycophants). George’s big idea might still have the ability to splice together a coalition of class interests and intellectual tastes. It’s not just the nerdiest of utopian Lib Dem nerds who like it; in July, Martin Wolf, perhaps the English-speaking world’s most respected finance columnist, went on a Georgiacal tear in the Financial Times:

In 1984, I bought my London house. I estimate that the land on which it sits was worth £100,000 in today’s prices. Today, the value is perhaps ten times as great. All of that vast increment is the fruit of no effort of mine. …This appropriation of the rise in the value of land is not just unfair: what have I done to deserve this increase in my wealth? It has obviously dire consequences.

First, it makes it necessary for the state to fund itself by taxing effort, ingenuity and foresight. Taxation of labour and capital must lower their supply. Taxation of resources will not have the same result, because supply is given. Such taxes reduce the unearned rewards to owners.

Second, this system creates calamitous political incentives. In a world in which people have borrowed heavily to own a location, they are desperate to enjoy land price rises and, still more, to prevent price falls. Thus we see a bizarre spectacle: newspapers hail upward moves in the price of a place to live—the most basic of all amenities.

If you’re a renter who reads the newspapers, you have spent the last few years in a constant state of low-level anger at this “bizarre spectacle”—the unexamined assumption that perpetually escalating housing prices are the natural state of human affairs, and certainly a good enough proxy for economic health that the two quantities are freely interchangeable. How much more bizarre must it look in England?

There are practical problems with LVT, the biggest one being how exactly you assess the unimproved value of a plot of land. How do you calculate the part of the asset value that’s derived not from human activity, but from the pure quantity of the footprint and its geographical station? There’s no easy answer, but, hell: the odious necessity of forcing citizens to define, document, and disclose their income is an enormous “practical problem” with the income tax, yet by some miracle, we are oh so lucky enough to have one. Towns and cities already employ an army of land-value assessors that can’t be 1% as large as the hordes of enterprise-destroying revenuers that virtually every polity considers itself obliged to provide with the necessities of life. Henry George was already falling out of favour before the industrial democracies adopted income taxation to any serious degree; contemporaries who argued against him all shrieked to heaven about the sacredness of property, hardly suspecting that the alternative was to be wholesale readoption of the corvée.

It is common for economists—like Wolf and Cable—to harbour admiration for George, a figure all but forgotten outside their profession (although 100,000 people attended his funeral, and John Dewey compared him to Plato). Milton Friedman said that “in my opinion, the least bad tax is the property tax on the unimproved value of land, the Henry George argument of many, many years ago”. (This is a quote to which undergraduates are now being exposed through the medium of Greg Mankiw’s Essentials of Economics.) Friedrich von Hayek admitted that “It was a lay enthusiasm for Henry George which led me to economics.” Paul Krugman, confronted recently by a latter-day orthodox Georgist in Germany, escaped by admitting that “urban economics models actually do suggest that Georgist taxation would be the right approach at least to finance city growth” and scrambling away, making but-of-course-it’s-impossible noises. Barry Eichengreen credits George with anticipating modern business-cycle theory.

Similar examples could be compounded endlessly, but the basis for George’s big idea isn’t merely theoretical: see, for example, the 2008 OECD paper that ranks types of taxes on their apparent growth-friendliness, and finds, unsurprisingly, that the worst-to-best order runs 1) corporate income taxes, 2) personal income taxes, 3) consumption taxes, 4) “Property taxes, and particularly recurrent taxes on immovable property.” It must be remembered, however, that economists count non-avoidability as a virtue. The main reason they find land-value taxation attractive in principle is basically this: good luck finding a place to stand that’s not land, sucker.

[A glowing biographical notice of George, which highlights his fleeting connection to British Columbia, can be found at the website of the Federal Reserve Bank of Dallas. It was, naturally, written by the Dallas Fed’s senior economist (who carelessly describes pre-Confederation B.C. as part of “Canada”). The OECD paper was brought to my attention by Brian Dell, who has so many degrees there must be one with “economics” scribbled on it somewhere in the pile, and who did a little Georgizing himself a few days ago.]