It was a busman’s holiday. I spent Thanksgiving weekend at the 29th annual Vancouver International Film Festival (VIFF)—not as a film critic, but as a filmmaker invited by the festival. VIFF was showing Yesno, a short film that I’d produced and directed, and which premiered at TIFF last month. This was my first visit to VIFF, which rhymes with TIFF, but bears little resemblance to its Toronto counterpart.  Simply put, TIFF is an industry juggernaut, second only to Cannes, and serves as the fall launch pad for awards-season films, with all the media gridlock and celebrity razzmatazz that entails, especially on the front-loaded opening weekend. VIFF is primarily a public festival for local audiences. It’s more relaxed and more affordable, with a large program (365 films from 80 countries) that’s stretched over 16 days.  Vancouver folks get tired of seeing media stories on their festival that inevitably begin with comparisons to TIFF, and I suppose this counts as another one. But I’m really in no position to compare the two events, because my roles at them were so different. Conquering TIFF as a film critic is an exhausting ordeal that requires almost military planning.  As a filmmaker at VIFF, I was under no obligation to cover the festival. I didn’t have to see anything, so the movies I chose to see were simply ones that intrigued me, or that I’d heard filmmakers chatting about over breakfast. So I was reintroduced to the pleasure of discovering films at a festival, as opposed to consuming them at an industrial rate. Among those that caught my eye were four documentaries that had not been shown at TIFF, or anywhere else in the country—Love Shines, The Desert of Forbidden Art, The Two Escobars, and Zanzibar Musical Club. They span the worlds of music, art and soccer, but they are all, coincidentally, tales of thwarted talent or buried brilliance,

Love Shines, which received its world premiere at VIFF, is an intimate portrait of the Canadian music scene’s most under-appreciated artist, singer-songwriter Ron Sexsmith.  The film finds him at a crisis point in his career. This guy is a musician’s musician, and has a cult following that includes Elvis Costello, Paul McCartney, Elton John, Steve Earle, Daniel Lanois and Feist.  But faced with disappointing album sales and a music industry in freefall, Sexsmith frets about his future. He desperately needs a hit, and some commercial ballast to match his critical acclaim. So he takes radical action. To record his 12th studio album, Late Bloomer Long Player, he hires Bob Rock, the legendary American producer known for his work with bands that favour power chords and umlauts, such as Metallica, Aerosmith and Mötley Crüe. That makes for an odd-couple partnership rich with irony. Director, Doug Arrowsmith takes the camera into the studio sessions, an intrusion that seems to leave Rock unfazed—and no wonder, given that the producer endured several years on camera during the recording/therapy marathon captured in the documentary Metallica: Some Kind of Monster.

The studio sessions with Rock anchor the Arrowsmith’s narrative, which draws on eight years of filming by the director. The result is a time lapse portrait of Sexsmith, and of Arrowsmith’s filmmaking, which has evolved from amateur to professional by the time he’d done. The footage ranges from cute home video glimpses of the singer’s childhood to a momentous concert at Massey Hall, where the guests include one of Sexsmith’s early idols, Gordon Lightfoot. The film also dips into its subject’s personal life, notably his self-professed shortcomings as a father to his two children, now both in their 20s. And woven throughout is reverent and insightful commentary from the  Lanois, Earle, Costello and Feist. Costello is especially astute, describing Sexsmith as once-in-a-blue-moon talent akin to McCartney, but who has the misfortune of being born too late. Feist, who recorded Sexsmith’s Secret Heart, is wonderfully articulate and charismatic. And Sexsmith, who reflects on his music and career with wry self-deprecation, wins us over with a candid mix of vulnerability and charm. After a dozen albums, and widespread acclaim, he is still almost famous, still looking for the big breakthrough, and the big payday, now that the money in the music business has all but dried up. His second wife, singer Colleen Hixenbaugh, spells out the ultimate irony: when excited fans spot Ron in the laundromat, they first ask for his autograph, then say, “What are you doing in laundromat?!”

Arrowsmith keeps his story focused on that quintessentially Canadian predicament of the insecure artist gazing up at the star-maker machine. Fame is something Sexsmith clearly craves—how else can a musician making a living?—yet, as  Rock (the producer/therapist) gently suggests to him, perhaps he’s also afraid of it. Afraid of greatness. In fact, we get the sense that the same shy vulnerability that may be thwarting the singer’s success is exactly what makes his art so special.

Although Love Shines is the portrait of tortured artist, it’s not a downer. In fact, Sexsmith’s melancholy can be downright amusing, especially when framed by his own disarming self-awareness. And the ultimate tonic is the uplifting music that emerges from the sessions, notably the song Love Shines, which offers tangible hope that the long-awaited breakthrough may finally be at hand. 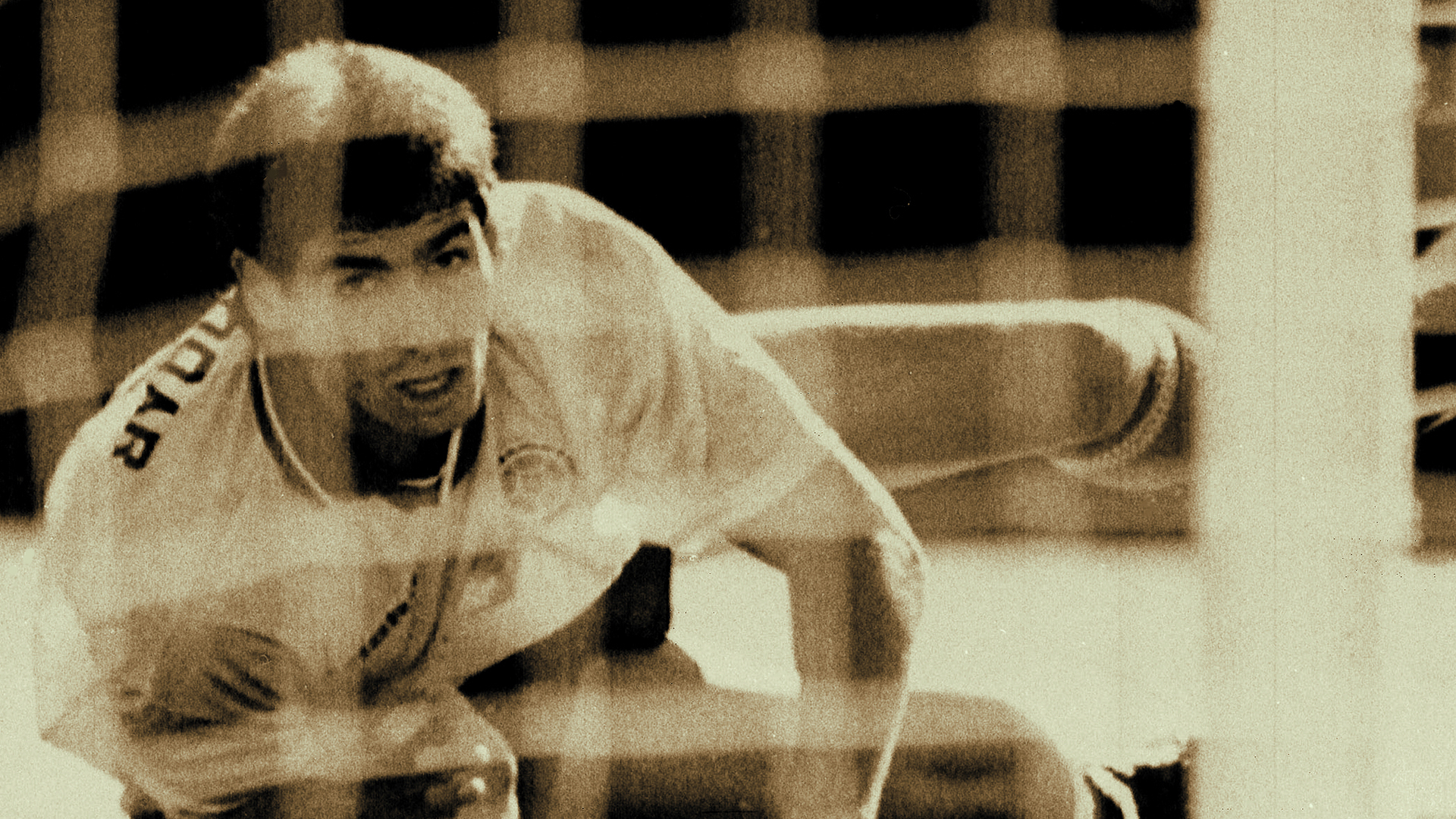 Colombian soccer star Andrés Escobar, who was killed after scoring on his own net in the World Cup

Here’s another story of shaky self-esteem, with much darker consequences. I doubt there has ever been a movie where sports, crime and politics have collided in such breathtaking fashion. The “two Escobars” of the title refer to a pair of iconic Colombians, who were assassinated within a year of each other—infamous drug lord Pablo Escobar and soccer star Andrés Escobar. The idea of a notorious gangster and a martyred hero being joined at hip in a single title is anathema to many Colombians, but that’s just part of the tricky national trauma explored by this gripping and complex documentary. The film was directed by Americans, brothers Jeff and Michael Zimbalist, which might have allowed them some outside perspective, but they are by no means tourists. They speak fluent Spanish, have spent several years living in Colombia, and what interest them is demolishing the country’s stereotypes, not enhancing them.

The documentary was produced for ESPN, in a series that also includes Steve Nash’s new doc about Terry Fox, Into the Wind, and to have such explosive material presented in a sports movie seems quite subversive. Taking an investigative approach, and unearthing unseen footage, the Zimbalist brothers deconstruct the popular demonology surrounding Colombia’s narco wars, and show that the battle between good and evil is not nearly as clearcut as it might appear.

The film shows how Pablo Escobar provided both housing and soccer fields for the poor, as well as pumping drug money into the sport, turning Colombia into a potential soccer power. It also tracks the camaraderie between the drug lord and the players who made up Colombia’s national team in the 1994 World Cup. We see footage of a secret game that the entire team played with Pablo in Cathedral Prison, which the gangster had turned into his personal compound. And there are compelling interviews with the coach, the players, and relatives of both Escobars. We meet Pablo’s former right-hand man, who estimates he killed maybe 250 people—”only psychopaths keep count.” And we come to understand the climate of fear that rattled the team in the World Cup, setting the stage for the fluke goal scored by Andrés on his own net—a fatal error that led to his assassination in Medellin, most likely by a drug cartel that had gambled on his team’s victory.

The documentary does not try to investigate the murder. Instead it unravels the culture and politics of a country whose national pride—as a nascent soccer power—became tragically entwined with its source of national shame—as a cesspool of drugs and violence. The Zimbalists show that, in both cases, the convenient moral equations  of black-and-white heroism and villainy do not hold up.

The Two Escobars screens again at VIFF Oct. 14 and 15. 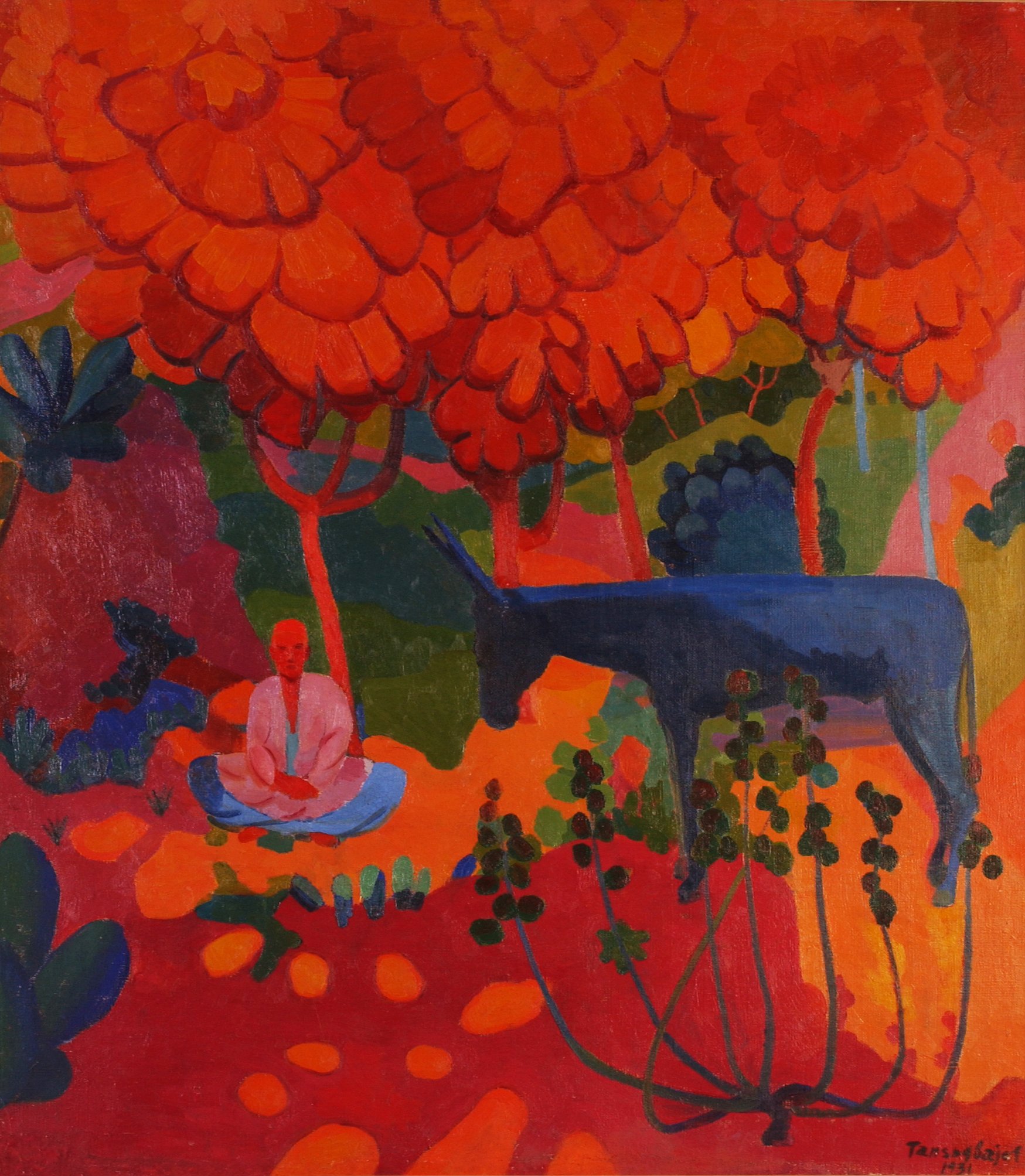 A painting from 'The Desert of Forbidden Art'

The Desert of Forbidden Art tells an extraordinary tale of anti-Stalinist subterfuge and one man’s quest to save a buried treasure of Russian modern art.  Directed by USC film professor Amanda Pope and her former student Tchavdar Georgiev, it tells the stranger-than-fiction tale of the late Igor Savitsky, an archeologist who bilked the Soviet regime of funds to create an art museum in the remote desert town of Nukus, Uzbekistan during the 1950s. Savitsky collected over 44,000 works, stashing them in this farflung location to preserve them from the Moscow’s barbaric censorship. Ben Kingsley voices excerpts from Savitsky’s journals, conjuring a sly and passionate art lover, who travelled the 2,700 km between Moscow and Nukus over 20 times, and who remained devoted to his mission until dying breath. The film is laden with a wealth archival material, from photos to film footage, but its greatest pleasures lies in the luxurious images of the paintings themselves. But in the end, just as we’re savouring the triumph of Savitsky’s end run around Stalinism, we are left with the grim prospect that the museum Savitsky built as an art asylum may now be threatened by Puritans of a different stripe, with the rise of Islamic fundamentalism in the region.

The Desert of Forbidden Art screens again at VIFF Oct. 14. 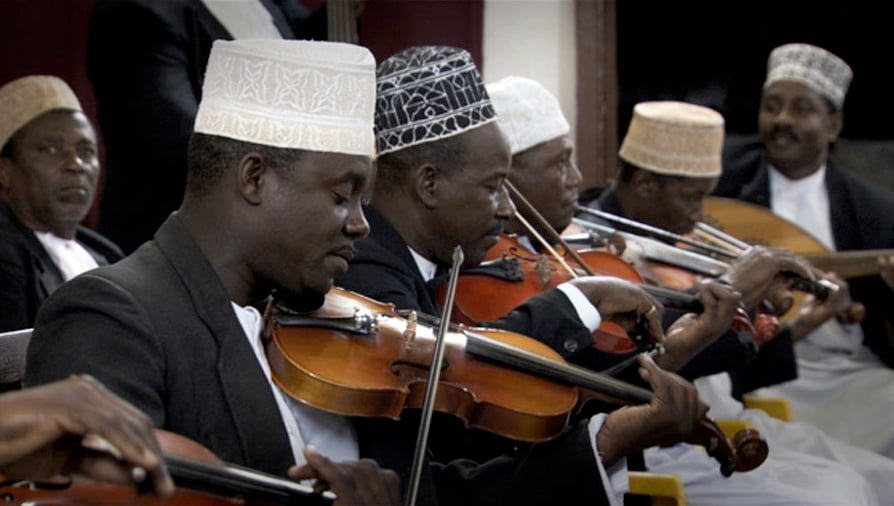 A scene from 'Zanzibar Musical Club'

This is the kind of documentary that serves as a vicarious form of tourism, immersing you in a remote and exotic culture without an apparent agenda. There is not a word of  narration, or explanation. The movie begins and ends with rhapsodic images of dhows plying the turquoise waters off the Indian Ocean. Immediately you want to be there. As the title implies, the film could be construed as an East African counterpart to Wim Wenders’ Buena Vista Social Club. It’s about a loose collection of folk musicians who date back to the 1970s. But in this case, there’s no Carnegie Hall concert at the end of the rainbow. There’s no formal portraiture of the players. And the film unfolds as a work of pure, languid impressionism, fly-on-the-wall verité that bathes us in the manners and rituals of an arcane island culture where life and music are inseparable. From the first shot of a blue-eyed black woman with a strong and sinuous voice, you get picture: Zanzibar is a unique crossroads. Powered by drums, violins and various mongrel instruments, the music swirls with Arabic cadences, African rhythms and Indian melodies to form the infectious hybrid known as Taarab. One of the performers is a scary, toothless woman who looks very, very old and sings a folk ditty about a man taking a woman into the bushes and raping her. (She reminded me of  Leonard Cohen’s Closing Time: “She’s a hundred but she’s wearing something tight.”)  Beyond that, I find Zanzibar Musicial Club impossible to  to describe. It’s a you-had-to-be-there experience. A movie that exists in the moment. The likelihood of it finding distribution seems  slim, which makes the experience that much more precious. It’s the kind of film that festivals were made for, a buried treasure you may never glimpse again.