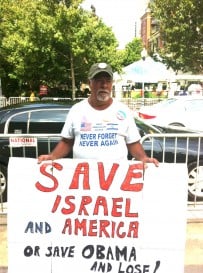 In case you thought the RNC would take credit for all the weird out there, think again.

I would like to introduce you to Bob Kunst, gay Zionist Obama hater, registered Democrat, reluctant Romney supporter, and president of pro-Israel organization, Shalom International.

Kunst cares about one thing and one thing only: the state and fate of Israel.

I caught up with him outside of the Charlotte Convention Centre this afternoon, where he added some much-needed weirdness to an otherwise pretty conventional convention.

This is what he told me:

Meanwhile, another Zionist, Chicago mayor and former Obama staffer Rahm Emanuel, is having his own troubles at the convention; mainly stemming from the fact he is going in the first place. The big speakers are set to take the stage Tuesday night, and Emanuel is supposed to be among them (other keynote speakers include 37-year-old San Antonio Mayor Julian Castro and First Lady Michelle Obama. But Chicago’s GOP is urging the mayor to stay home instead, citing a number of urgent crises, like gang violence and union negotiations. Emanuel has just announced he will limit his time at the convention.

In other news, things on the floor here couldn’t look anymore different from last week’s Republican  National Convention. The DNC looks like a Toronto subway platform: lots of diversity and lots of young people. The one resounding similarity between the two events? Lots of fat people. United we sit…

Join me Tuesday when I’ll be covering what I’m pretty sure is the only Pro Life event at the DNC, followed by a Planned Parenthood rally, and — eventually — Michelle Obama’s big speech.