An iconic actor caps his own tribute with a tribute to the late Phillip Borsos, praising him for punching out a producer—then begs to bring the event to an end so he can relieve himself. 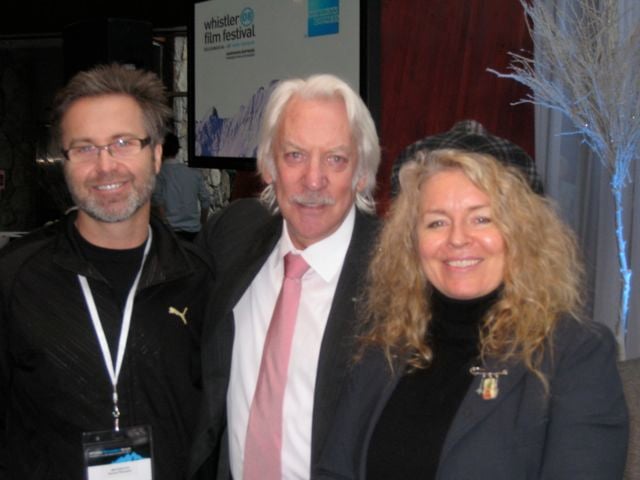 When Donald Sutherland stepped on stage at the Whistler Film Festival Saturday night, he was wearing layer upon layer of clothing under a long trenchcoat. The coat stayed on for while as he as he took his seat for a special tribute to him. He explained he’d been throwing up all day. A case of suspected food poisoning. But as the event unfolded, this towering 73-year-old acting legend, a charismatic figure with a mane of white hair, rose to the occasion. As highlights of his immensely prolific career played on screens—clips the actor had chosen himself—Sutherland served up one delicious anecdote after another. He showed his swaggering, insolent interchange with Clint Eastwood on The Dirty Dozen, a few moments of film that he said forever changed his life. He talked about how Bernardo Bertolucci demanded he smash his head into a pillar in the scene where he kills a cat in 1900. Later, while re-enacting the scene in a drunken moment, he cut open his ear and required 17 stitches. After showing a clip from M.A.S.H, he talked about how its director, Robert Altman, tried to have him fired before he’d even set foot on the set, and how at the end of the shoot he and some fellow cast members tried to have Altman committed. Discussing Nicholas Roeg’s Don’t Look Now, and explaining that he suffered from extreme vertigo, Sutherland showed the scene of himself dangling from a collapsing scaffold in a church—a scene the stuntman had refused to do—and found out after the fact how close he had come to breaking his neck. Sutherland showed a heartbreaking scene with Mary Tyler Moore in Ordinary People, and said that when they first shot it he bawled his eyes out. The next day, after watching the rushes, he told filmmakers that weeping had been a huge mistake and begged to reshoot it. They said it was fine. Then three months later, during editing, Redford called and said he was right. They needed to reshoot it. But they couldn’t get Moore. So Redford delivered the movie’s most emotional scene with Redford standing in for her.

As the tribute wore on—with such a prolific subject, there’s a lot of ground to cover—Sutherland finally complained that he had to go to the bathroom. “When you’re old, you’re like five years old,” he said. The tribute’s moderator, broadcaster Terry David Mulligan, wouldn’t let him off the hook. He squeezed in a few more questions. Asked about his son Keifer, Sutherland says he’s very proud of his success and, yes, he si a fan of 24. “When he was two we watched him run around in his sleepers. Now he does 24 and he scares the shit out of me. . . It’s a wonderful show, if you like torture.” To the delight of the audience, Sutherland also slipped in some outraged jibes about Harper proroguing Parliament. “We have a president in the U.S. who’s magic,” he said. “We better get some magic up here really quickly.”

The tribute’s most moving moment came when Sutherland talked about shooting Bethune: The Making of a Hero with the late Phillip Borsos. Suddenly it was the actor’s turn to pay tribute. He said Borsos meant more to him than any director he had worked with—high praise coming from someone who has worked with the likes of Fellini, Bertolucci, Redford and Altman. With Sutherland’s homage to Borsos, a deep connection came full circle. At the Whistler Festival, the actor was also serving as the president of the Borsos jury, which would select the winner of the $15,000 Borsos Award, named in the director’s honour.

The next day, at the awards brunch, as Sutherland presented the award to Quebec director Jim Donovan for 3 Seasons, he delivered a stern and moving proviso. “Every dime of it that you spend, I demand that you remember how hard-earned it was, how much work you spent in pursuing it, how much of your heart and soul and mind . . . because of all that was Phillip Borsos. I look around at all of you and I can see his face just like it was 23 years ago, looking at me patiently, deliberately. He was sitting in front of me in the seedy rundown ruins that I was living with in Montreal in the Ritz Carlton Hotel [laughter]. The force, the energy of that exchange got bigger and bigger. I knew a lot about Norman Bethune. He was living inside of me. But the noise in that room, the purity and the passion, was too much for Norman. He jumped out of me and he grabbed Phillip and he hugged him and I hugged him. The three of us did a dance in that dingy room, a war dance, a dance of joy, of creativity, of pure Canadianness. It was like the world was going to change and we were going to be there when it changed. We did not at that moment take into account the wretched chicaneries of [Bethune producer] Peter Kronenberg and [writer] Ted Allen, who were about to betray Phillip and me and Bethune and Canada at every turn of the road.”

His voice trembling with supressed rage, Sutherland resurrected the bitter feud that wracked the production of Bethune. Talking about this schism as if it was still an unhealed wound. “I’m not a violent man,” he said. “I don’t take pleasure out of violence. But I have to admit I took a measure of satisfaction when I remember that day in that great stony square in small Chinese town when Phillip punched Peter Kronenberg in the nose.”

The audience laughed. But Sutherland went on to talk about Borsos with deepening emotion. “The work that he and I did was the best work I have ever done in my life. The making of that movie filled Phillip’s heart with joy and pride and then it broke it.” And after Borsos’ death from leukemia, Sutherland has always suggested that the movie broke his health as well. Finally offering the award to Jim Donovan, he said, “Take it, cherish it, but you’re going to have to wipe your hands because there’s a lot of blood on it.”