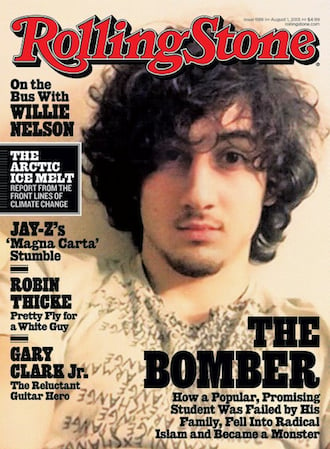 By now you have probably seen shaggy haired, doe-eyed Dzhokhar Tsarnaev—otherwise known as one half of the alleged Boston marathon bombers–on the cover of this month’s Rolling Stone magazine. If so, you have also likely witnessed the accompanying furor: readers are canceling their subscriptions, corner stores are pulling magazines from newsstands, and the mayor of Boston, Thomas Menino—among others—has written a strongly-worded letter to Rolling Stone publisher Jann Wenner: “The survivors of the Boston attacks deserve Rolling Stone cover stories,” Menino wrote yesterday, “though I no longer feel that Rolling Stone deserves them.” Kelly Osbourne (who also graced the magazine’s cover as a teen, albeit for very different reasons) weighed in as well: “In case you failed to realize,” she tweeted, “#TheBostonBomber is a murderer not a band & has no place being on the cover of @rollingstone.”

The same could be said, however, about murdering lunatic, “not a band,” Charles Manson, who was also at one time, on the cover of Rolling Stone. In fact many non-bands have appeared on the magazine’s cover: Barack Obama, George W. Bush, Al Gore, Steve Jobs. Mythology aside, Rolling Stone is as much a political publication as it is an entertainment one. So why the uproar, especially over a photo already widely circulated by other news outlets– a photo that appeared on the cover of the New York Times no less?

The problem with this month’s Rolling Stone cover isn’t that Dzhokhar Tsarnaev is on it. The problem is that he looks so undeniably cool: like a prepubescent Jim Morrison or a Jonas Brother gone rogue. He doesn’t look like a monster posing for a mug shot. He looks like he’s just gotten laid. And nobody wants to see him that way. He’s supposed to be sallow, not glowing, demonic, not angelic. There should be a massive red X running across his face. But there isn’t, and walking down the magazine aisle at a supermarket, you’d have to look twice to distinguish Tsarnaev’s boyish mug from all the other pretty faces. No wonder the stores pulled their copies.

A number of journalists, riffing off Leonard Cohen, have since come to Rolling Stone’s defense. It was Cohen who asked, famously, about Adolf Eichmann,“What did you expect? Talons?” On Tsarnaev, we wanted talons too; certainly not warm lighting and a pin-up-worthy picture. But evil isn’t always ugly, at least not in the way we expect, and Rolling Stone’s current cover and the story that accompanies it, apparently solidifies that fact. Here’s Mark Joseph Stern in Slate:

“By depicting a terrorist as sweet and handsome rather than ugly and terrifying, Rolling Stone has subverted our expectations and hinted at a larger truth. The cover presents a stark contrast with our usual image of terrorists. It asks, “What did we expect to see in Tsarnaev? What did we hope to see?” The answer, most likely, is a monster, a brutish dolt with outward manifestations of evil. What we get instead, however, is the most alarming sight of all: a boy who looks like someone we might know.”

It’s profound, I suppose–the banality of evil, and all that. But beyond the obvious spike in attention and possibly, sales for Rolling Stone, one has to ask: was the cover really prudent? Was the alleged “subversion of expectations” and a hint at the “larger truth” really worth the most unnerving truth of all? That whatever hell he is right now enduring, Tsarnaev will undoubtedly take enormous pleasure in this? After all, what better poster could an American monster hang on his jail cell wall? What better trophy could a teenage killer possibly acquire?

The problem with this month’s Rolling Stone cover isn’t that it glorifies terrorism (which it doesn’t), nor is it the hurt feelings of Menino and other like-minded Americans. The problem, in the end, isn’t even that the victims of the Boston Marathon bombing don’t like the Rolling Stone cover. It’s that Dzhokhar Tsarnaev, that handsome devil, most certainly does.