Know how I know things are going great in Canada? Stephen Harper no longer feels compelled at every opportunity to ask God to pitch in with making our country more awesome. The Conservative leader used to end all his speeches by saying, “God bless Canada!” But then suddenly he stopped doing that.

And since he couldn’t possibly have stopped doing that simply because he’s in an election campaign and he’s desperately trying to get a majority and he’s made the callous strategic decision not to alienate the segments of the electorate that a) don’t believe in God; b) believe in God but don’t want their politicians invoking or being guided by God, and c) believe God shouldn’t lose focus on determining the outcome of professional sporting events and home pregnancy tests, then Harper must have stopped because even the blessing of God Almighty could not make Canada any better than it is right now. This is as good as it’s going to get, people!

Also, it’s a well-known fact that God does not listen to the prayers of men in sweater vests. Look it up – it’s right there in the Letter of Paul to the Haberdashers.

Anyhoo, there was talk of a caption challenge, was there not? Here’s one pregnant with possibility (don’t worry – in deference to the subject of the photograph, we’ll allow the possibility pregnancy to come to term)… 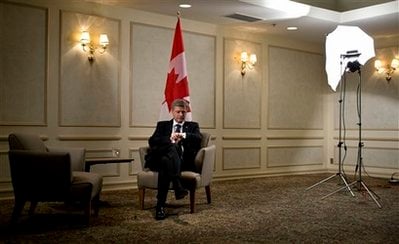 Write your witty caption below. The winner, as judged by Ottawa Citizen political columnist Joanne Chianello, shall receive a sweater vest. Seriously. You pick the size but, since God’s not busy blessing Canada, I’m going to ask Him to pick the colour.