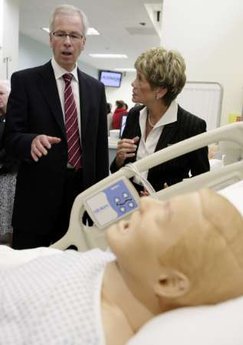 On the surface, a piece of cake, right? Stephane Dion at the bedside of some dummy? This is a fat pitch right down the middle and destined for the bleachers of high comedy, right?

Except that in honour of the Conservative Leader, this caption challenge is restricted to lines of dialogue taken – ie. plagiarized – from the movies, TV or other aspects of popular culture. Make sure the line has been said before. Bonus points if it was said by an Australian.

Winner gets a Barack Obama action figure. All participants get a sense of what it’s like to be Prime Minister of Canada.