The Conservative party’s platform, released yesterday, is actually entitled The True North Strong and Free. Although I ask you: if Stephen Harper wanted to be really patriotic, if he wanted to truly mine the deepest depths of Canadiana, wouldn’t he have also gone to the trouble of tattooing the platform onto Farley Mowat’s back fat?

As a matter of historical interest, the rejected titles for the platform include:

Meanwhile, with election day just one week away, it’s time for another caption challenge: 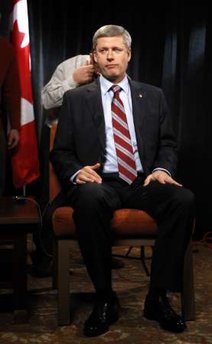 Today’s winner, to be determined by special guest judge Paul Wells, will receive the gift of being held eternally in high esteem by all who bear witness to this blog. Also just an incredible amount of chocolate, some of it shaped like things.