Emmy Nominations: Meaningful In a Meaningless Sort of Way 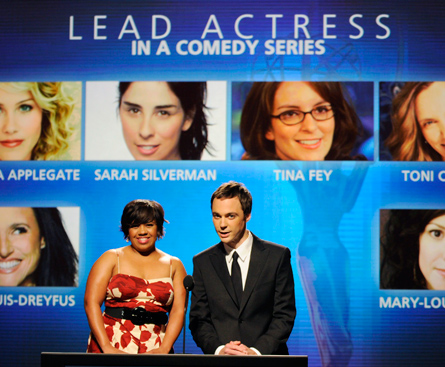 It’s always hard to know what to say about award nominations. (If you say awards are meaningless, that’s a cliché, and if you say awards are meaningful, that’s obviously false.) But now that the Emmy nominations have been announced (like the Oscars, the Emmys have expanded the number of nominees in the biggest categories) I can make observations, and sidestep the question of whether How I Met Your Mother magically became a better show this past season just because it was nominated for the first time.

Well, I’ll start with that show, now that I’ve mentioned it. It’s good that How I Met Your Mother got the nomination. This was far from its best season — weighed down by too much Stella and two, count ’em, two pregnancies — but an Emmy nomination validates the idea that it’s respected in the business, in effect announcing that it’s OK to go out and imitate it. And since it would be a good idea for more shows to imitate some aspects of HIMYM (the hybrid of multi-camera shooting and single-camera style, the unabashed sentimentality), the nomination is valuable as sort of a green light: this show is officially Respected now, and can be used as an example. (Even better: No nomination for Jeremy Piven. That leaves the field clear for Neil Patrick Harris to be unfairly beaten by someone else.)

That’s one thing that is valuable about awards presented by the industry, as opposed to journalists. Emmy and Oscar nominations offer an indication of what is respected in the industry, which may be a little different from what gains the respect of the critics or the audience (though there’s always lots of overlap). We can all agree, for example, that 30 Rock (22 nominations this year following up its multiple wins in previous years) has the respect of the industry like no other comedy in the world, and that Mad Men, with 16 nominations, is the most respected drama. These preferences overlap with critical preferences, though not audience preferences. But it’s more interesting to know what the people who actually make TV are interested in.

Now, it’s not an exact science, since if the nominations were arrived at by pure popular vote, the way they used to be, the list might be different. The nominating committees tend to pick shows that the Academy as a whole might not know that well. Still, to get on the list, you have to be in the top 10 of popular choices, so any show that gets nominated is obviously a favourite with the industry at large. (Update: Todd VDW says in comments that “the blue-ribbon panels have mostly been ditched.”)

The most obvious window into the mind of the TV-maker is the dominance of a certain kind of cable drama in the Emmy nominations. Broadcast network shows don’t do well; the only ones that got nominated were House and Lost. And cable dramas that are science-fiction (Battlestar Galactica) or light action-comedy (Burn Notice) don’t get much love either. The Academy members lean heavily toward “Good-Good” dramas (see below), dramas that deal with ambitious subject-matter and do things you couldn’t get away with on network TV. They are the shows that the average TV person dreams of making.

Sometimes shows are rewarded more for aspiration than achievement. The nominations of Dexter and Damages, both of which went through disappointing seasons, are like that; there are several dramas that deserved to be nominated more than those two, but they are both essentially higher-class, higher-risk versions of typical network shows (the forensics mystery and the lawyer drama) and therefore reflect the ambitions of the voters — in this case, the full Academy membership as well as the people who sit on the nominating committees. Their deepest desires are, arguably, to make the same shows they’re making now, only with less censorship and interference. It also helps if the show is somewhat high-class in terms of production values; The Shield, a deliberately gritty and cheap-looking show, doesn’t ring the Academy’s bells the way a nicer-looking show does.

With comedy, it’s a bit different. The voters and the winnowers on the Blue Ribbon Panel lean toward non-traditional comedies: of the seven nominees, there’s not a single show that is shot before a studio audience. (HIMYM adds audience reactions/laugh track after the shooting is finished.) This seems a little misguided at a time when the multi-camera sitcom is making a comeback, and after a season when The Big Bang Theory should have earned a place in at least the top 7.  But it’s what the voters want to be making. But there are two different streams of Emmy preferences when it comes to comedy. One is the half-hour prestige cable show, like Weeds, Entourage or even Flight of the Conchords. The other is the network comedy that is seen as being subversive or getting away with things that My Show (whatever show the voter happens to be working on) couldn’t.

This, I think, helps to explain the industry love for Family Guy. Now apart from the point that Family Guy isn’t even the best Seth MacFarlane show — American Dad doesn’t suck, whereas FG does — it has gotten progressively more self-indulgent since Fox brought it back. But the self-indulgence may be what has made it the first animated show to be nominated for Best Comedy. It’s allowed to make political jokes, scatalogical jokes, and jokes at the expense of its own parent corporation; most of those jokes may not be very good or biting, but people on other shows dream of being allowed to make them. That’s why 30 Rock hits the sweet spot: it, too, is allowed to get away with those things, including many jokes about the corporation that owns it, and it’s also a very funny show. Oh, and it’s filmed in New York, which is a plus (self-hating Los Angelenos have a thing for shows shot in New York). It will probably win, and it will come close to deserving it — I think The Office had the best season of the seven nominees.

Oh, there was an opera singer in the ’50s named “Emmy Loose,” but I’m not entirely sure how to make that relevant to this discussion. I’ll think of something eventually.