These are no longer working women who like to shop. They're post-feminist Barbies trapped in a Disney World of absurd opulence. 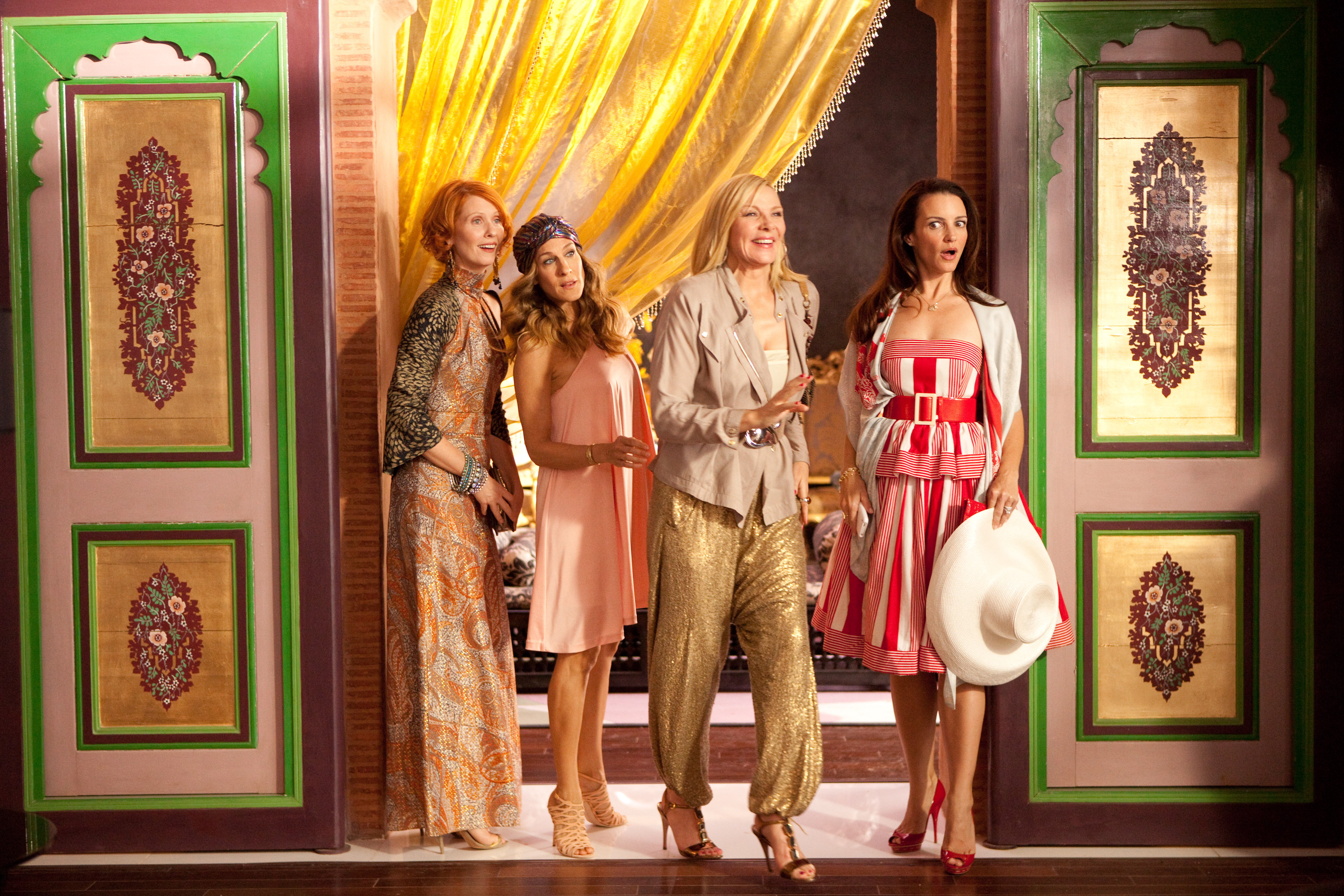 Offering my views on the latest adventures of Carrie, Samantha, Miranda and Charlotte strikes me as a pointless task. There’s no doubt that Sex and the City 2, like its predecessor, will be critic-proof, and man-proof. As a male critic, I’m totally not the target audience for this film. And whatever I have to say about it will be automatically suspect. I could condemn it outright as a witless, shapeless and shameless confection that is more about money than sex. But what difference would it make? I’ve already spoken to a several women who admit they’re eager to see it no matter how bad it might be. These four Manhattan superwomen of shopping and romance are their guilty pleasure, the chick-flick answer to the action blockbusters that cater to immature male fantasy. But I think these women will feel disappointed and betrayed.

The story, such as it is, begins in Manhattan, with the spectacle of a ridiculously extravagant gay wedding, where the entertainment includes white swans and a black-sequined Liza Minnelli. Meanwhile, two years after her low-rent wedding to Big, Carrie (Sarah Jessica Parker) has squeezed a book out of married life (I Do, Do I?) and is now fretting about losing the “sparkle” in their romance—which is graded in terms of luxury goods. For their anniversary, she buys him a vintage Rolex; he surprises her with a flat screen TV in the bedroom so they can cuddle and watch black-and-white movies. As Carrie contemplates their childless future, she’s petrified of becoming a homebody, “cheating on fashion with furniture.” At the other extreme, Samantha (Kim Cattrall) is deep into cougardom. Engaged in all-out war against menopause, she’s gorging on a daily regimen of vitamins, melatonin patches, estrogen supplements and “a touch of testosterone.” Carrie dubs her the “hormone whisperer.” Charlotte (Kristin Davis), a jobless woman with two young daughters, feels besieged by motherhood, and is suddenly paranoid about her young, bra-less Irish nanny. “There ought to be a law against hiring a nanny like that,” says Samantha. “A Jude Law,” cracks Carrie. As for Miranda (Cynthia Nixon), she’s a workaholic addicted to her BlackBerry and feeling bruised after bouncing off the glass ceiling in her upscale law firm.

These Manhattan story-lines might have had some potential, but when Samantha gets invited by a “chic sheik” to take an all-expenses-paid, super-luxurious trip to Abu Dhabi, she brings the girls with her, and the movie turns into a bone-headed romp—Sex and the City: National Lampoon’s Middle East Vacation. The girls coo and giggle in first-class comfort; upon arriving in Abu Dhabi, they are whisked away in four separate white limousines; they are given palatial suites equipped with obsequious servants. And they go on a camel ride through the sands, giving rise to camel-toe gags, and a crack from Samantha about “Lawrence of My Labia.”

Samantha is the narrative’s broad-shouldered workhorse. And her brazen sexual antics, offending mores in a Muslim country, drive the plot home amid a retro pageant of Arab stereotypes. Along the way, Carrie is unduly mortified by a tiny moment of indiscretion with an old flame (John Corbett), whom she meets by chance in the market. The story doesn’t leave the other two women a whole lot to work with—although, in one of the film’s only concessions to emotion, a tearful Charlotte moans about how hard it is to be a mother (despite being affluent and unemployed with a full-time nanny). She also delivers the movie’s sharpest line, confessing that when she worried about her husband running off with her nanny, “my first thought was: ‘I can’t lose the nanny.’ ”

That crackle of feminist wit only makes it more obvious how barren the rest of the movie is by comparison. I’m not about to deny anyone their guilty pleasure, but I found the whole thing rather alarming. Both Parker and Cattrall are pushing their glamour to freakish extremes. Parker is strangely endowed with a perma-tan, even before they go to the desert. And despite the jokes made about Cattrall squeezing her hefty frame into sausage-skin outfits that are much too young for her, that doesn’t make the spectacle any less lurid. In this glittering freak show, when Miley Cyrus and Penelope Cruz pop up in cameos, it’s as if real people have stumbled onto the set. And tell me, does any woman out there really consider Big (Chris Noth) a catch? I find him unctuous and creepy.

But hey, what do I know? I’m only a guy. Then so is the writer and director of this sad spectacle, Michael Patrick King. He was responsible for the the first Sex and the City movie, which grossed over US$415 million worldwide. I guess that convinced him once and for all that it’s not about the sex, or the city. It’s about the money.