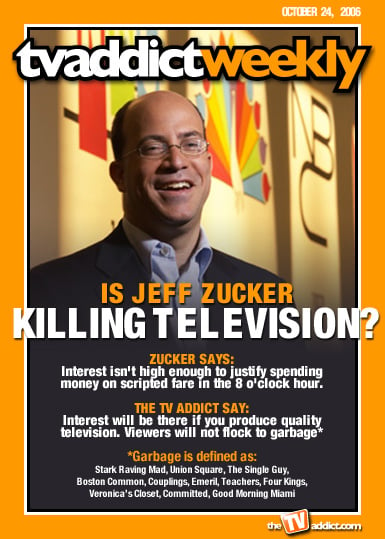 Jeff Zucker is a strangely fascinating figure. He’s like one of those baseball managers — Chuck Tanner, or someone like that — who takes a first-place team to the cellar, without damaging his reputation or his ability to get work. One of the running themes in the NBC saga is that Zucker has somehow managed to evade blame for taking a first-place network to last place, even though it’s directly attributable to his disastrous development record in the early ’00s, along with his lack of a strategy for dealing with the end of NBC’s 90s hits.

Other people, like Ben Silverman, get fired and publicly derided, while Zucker keeps getting promoted upward. And it’s happening again; he’s going to be the head of the new Comcastified NBC. You would think that new management would want to bring in some, you know, new management, but Zucker is apparently a fixture at this point; he’s going to stay there because, he’s always been there, so he must be doing something right. He’s living testimony to the rule that if someone hangs on to a high-profile position long enough, the world will begin to assume that he deserves it.

Of course, there’s always the possibility that he is doing something right. As Mark Harris pointed out in his recent piece on NBC, Zucker’s bad track record at the main network may be more than balanced out, from a corporate point of view, by the success of other branches of the NBC TV family. Maybe, in an age of consolidation, an executive can’t be judged primarily by the success or failure of only one network, and maybe NBC, CBS, ABC and Fox are not that much more important, in the big picture, than their corporate brethren. That’s a whole lot of “Maybe”s, though. For now, it just looks like Zucker is an example of a weird paradox in the world of TV executives: really successful TV executives don’t last long in their jobs, while unsuccessful ones can last forever if they’re good at pinning the blame on others.