Federal government 'well ahead' on path to surplus, Harper says

'We are well ahead of track,' PM says 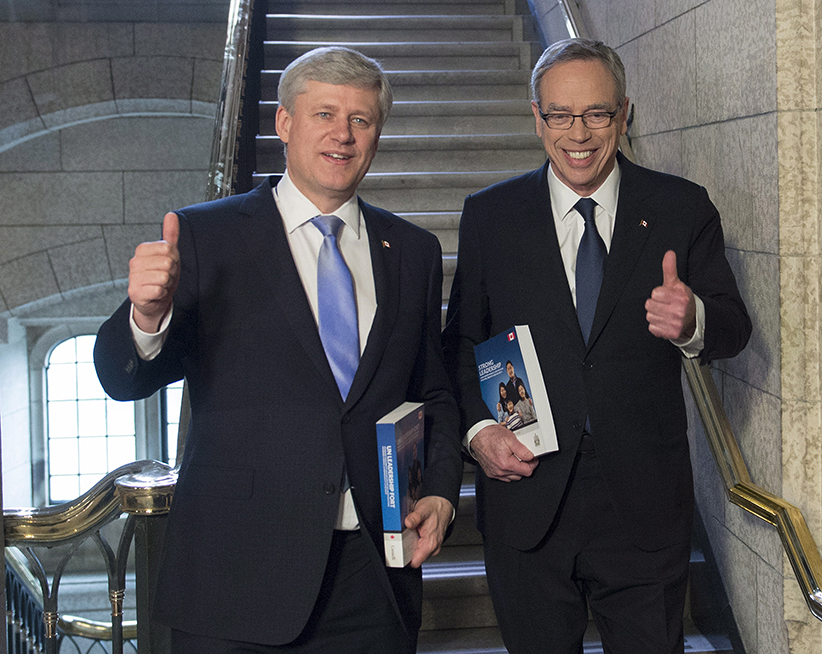 OTTAWA — The federal government is “well ahead” of its own projections for a balanced budget this year, Prime Minister Stephen Harper said Friday, two days after the federal budget watchdog warned a slower-than-expected economy will keep Ottawa in the red until at least 2016.

And while Finance Minister Joe Oliver didn’t respond to a call from the Liberals to prove his projections for a small surplus are intact, Harper insisted his government’s balanced budget pledge isn’t merely an election-year fairy tale.

“I think it’s more than speculating,” Harper told a news conference in Regina.

“We are well ahead of track, we’ve run a significant surplus —$4 billion in the first two month of this fiscal year,” he said.

“Our budgeting is very conservative and we are well on track to realize a balanced budget this year.”

Liberal finance critic Scott Brison has called on the government to back up that claim by making public the Finance department’s latest budgetary projections in front of a parliamentary committee.

While Oliver responded to the request Friday, he didn’t say whether he’ll provide a fiscal update before the expected Oct. 19 election — or at all.

In a letter to Brison, laden with Conservative party talking points, Oliver noted the federal treasury reported a $3.9 billion surplus in April and May of this year.

He also repeated his months-old mantra — that the government remains on track for a balanced budget this year.

The Parliamentary Budget Officer warned on Wednesday that Ottawa could see a budget deficit of $1 billion in the current fiscal year, based on a downgraded Bank of Canada economic forecast.

The Conservatives tabled a budget in April that predicted a $1.4-billion surplus this year, but the budget officer’s calculation raised doubts about the projection.

And without updated numbers, the opposition parties are shying away from making their own pledges to balance the books in 2015.

Brison has said he can’t say with certainty that the Liberal party, if elected to govern, will produce a balanced budget this year without updated numbers from Finance.

“Then, and only then, are we able to predict with certainty what we’re capable of doing in terms of balancing,” Brison said in an interview Thursday.

The New Democrats had said they would deliver a small surplus in 2015-16 under their policy platform.

But NDP Leader Tom Mulcair appeared to step away from that pledge Friday, saying in a television interview his party will have to make “tough choices,” and will balance the federal books over time.

“Over the life of our promises . . . we’ll be able to balance the budget,” Mulcair told the CBC, giving the example of his party’s child-care plan, which he said the NDP would roll out over eight years.

Oliver cast doubts on the policies of both opposition parties, repeating in his letter a link the Conservatives have been trying to make between the opposition fiscal platforms and the economic crisis that has recently plagued parts of Europe.

“The situation in Greece is another reminder that we remain in a fragile global economy,” said Oliver.

“Both the Liberals and NDP would have had Canada join the list of countries now owed billions by Greece.”