Fight It, Colbert, Fight It! Also, Comedy That Goes Somewhere 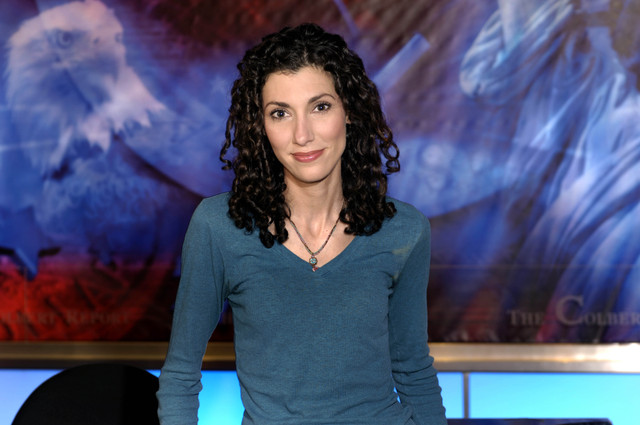 Jon Stewart and Stephen Colbert are on three-week vacations, and you know what that means: staff departures and replacements. Allison Silverman, who was Colbert’s head writer from the beginning of the series, became executive producer two years later, and has been as responsible as anyone for shaping the tone of his show, is stepping down. No official reason has been given (because, well, everybody’s on vacation), but the New York Times was informed by a Comedy Central executive that she was just exhausted after four years of working on the show, which sounds perfectly understandable.

I don’t know if this is actually true, but it seems like Colbert would be a more demanding show to work on than The Daily Show, because Colbert has to be in-character with everything he says, so they can’t just write straightforward jokes; every joke has to be a commentary on current events and something the Colbert character would plausibly say. (And then there’s “The Wørd,” where they have to write those two-level jokes while also coming up with jokes for the talking-points sidebar.) Also, The Daily Show has more field pieces that can be made separately from the rest of the writing/production staff.

Silverman described a typical Colbert Report day in this recent interview excerpted in Vanity Fair, which also includes a great discussion of what she calls “status shifts” in a comedy scene: how a lot of the comedy comes from who is in control of the scene, and how a good sketch can transfer control (and with it, power) from one character to another and then back again, instead of just sticking with one relationship (straight man/stooge) through the whole scene.

I once wrote a sketch on Late Night With Conan O’Brien that I liked because it dealt with some issues that were on my mind at the time.

The sketch started with Conan returning from a commercial break and saying something to the effect of, “I’ve got to tell you, sometimes being a talk show host makes me feel a little guilty. I could have been a lawyer or a doctor—that would have been way more valuable to society.”

There was an actor in the audience who piped up, “Excuse me, Conan. I am a doctor, and I just wanted to let you know that you couldn’t have become a doctor, so just stop worrying about it. You just don’t have the skills to be a doctor—or the intellect!” The “doctor” then injures an audience member and demands that Conan prove that he actually could have been a physician. Conan manages to treat this “patient” brilliantly.

It starts with a switch: At first, Conan is in charge and says, “I could have been a doctor.” The doctor says, “No, actually, I am in charge, and you couldn’t have become a doctor even if you’d wanted to.” And then it switches once again.

She discusses this in reference to a Conan O’Brien sketch, but it’s very applicable to the world of The Colbert Report: part of the fun of a good segment is that even when he’s alone at the desk, he bounces back and forth between having and losing control. One minute he’s saying something insightful, the next minute he’s being an idiot and doesn’t know it. “The Wørd” is at its strongest when the sidebar vacillates between agreeing with Colbert and contradicting him, instead of just backing up what he says (which was the idea they originally used) or just contradicting everything he says (which is what happens sometimes). One of the reasons Saturday Night Live sketches tend to be toothless is that they pick one idea, and therefore one relationship between characters, and repeat it for the entire sketch. Colbert has more bite, when it’s good (it isn’t always, of course), because it starts a segment with a premise and then changes things up and back again.

It’s a comedy principle that goes way back, of course. My favourite example is in the mirror routine from Duck Soup. Why is that routine so much better with Groucho and Harpo than with the many comedians who did the same routine before and after? Because there are “status shifts” throughout the sketch. The typical version of this skit gives all the control to the person pretending to be the reflection, but in this version, Groucho knows Harpo is not really a reflection and is just trying to force him to admit it. Groucho seizes control of the situation by coming up with a new way to force Harpo to admit he’s not a reflection, but Harpo turns it back on him in different ways. At one point Harpo completely blows his cover, dropping his hat, and Groucho hands it back to him, but then they go on with the routine as if nothing had happened. They even switch places at one point. There are all kinds of twists and turns in it, whereas most people who do that sketch stick to one joke (there’s these two people and one does exactly what the other guy does). Even in “Who’s On First” there are moments where Costello is on the verge of gaining control or bringing the conversation around to where he wants it. If a sketch stays in exactly one place for its entire length, it goes nowhere and builds to nothing.