For the record: The PM on the Fort McMurray wildfire 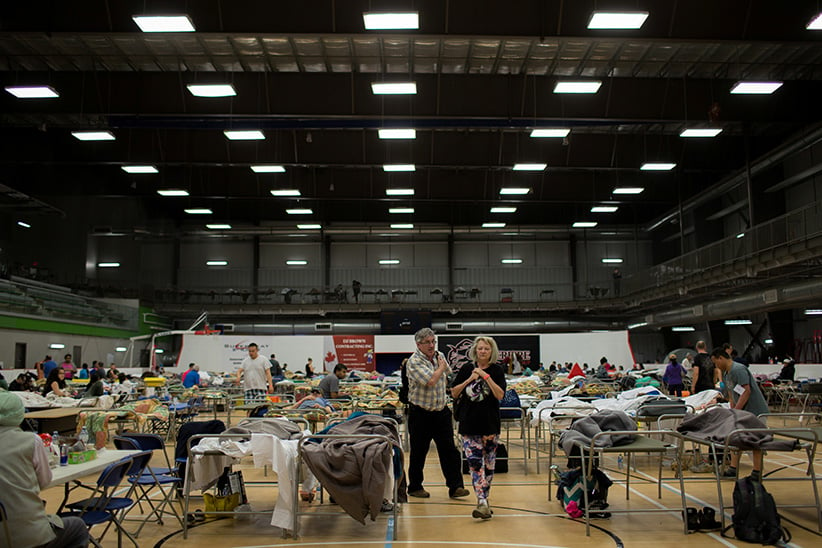 Fort McMurray residents are seen at a community centre in Anzac, Alberta, after residents were ordered to be evacuated due to a raging wildfire, May 4, 2016. (Topher Seguin/Reuters)

Here is a partial text of Prime Minister Justin Trudeau’s statement Thursday in the House of Commons on the Alberta wildfire disaster:

It is with a heavy heart that all Canadians have watched the devastation unfold over the last few days. Over 80,000 residents have been evacuated in the largest fire evacuation in Alberta’s history. Homes have been destroyed, neighbourhoods have gone up in flames. The footage we have seen of cars racing down highways while fire rages on all sides is nothing sort of terrifying.

I know I speak for all members of this House, and 36 million Canadians, when I say that our hearts go out to all affected families. We are thinking of and praying for the people of Fort McMurray.

Though Alberta’s loss is profound, we will get through this tragedy together, as friends, as neighbours, as Canadians. The people of Fort McMurray can count upon the full support of this government. We will weather this storm together _ and together, we will rebuild.

While it too soon to comprehend the full extent of the damage, we know that it is far-reaching and utterly devastating.

I have spoken with Premier (Rachel) Notley and our orders of government are in close contact as we monitor the situation every step of the way.

I want to assure the people of Alberta that we are doing everything we can to help. …

The people at the government operations centre know what they are doing and do their job well. They have been in communication with various partners on how to properly address this crisis; partners like Natural Resources Canada, Health Canada, National Defence, Indigenous and Northern Affairs, the RCMP, the Canadian Interagency Forest Fire Centre, and emergency management organizations like the Canadian Red Cross.

In addition, the people of Fort McMurray have the support of the Canadian Armed Forces. …

Currently, the RCAF is deploying four CH-146 Griffin helicopters to Fort McMurray and one CC-130J Hercules to CFB Cold Lake.

The RCAF is ready to provide support to the province of Alberta in the provision of air assets, to assist with evacuation efforts, deliver essential aid to affected regions and transport firefighting personnel and equipment to these regions.

In addition to the efforts of our Forces, as well as the GOC’s co-ordination of information, supplies, and services for response and recovery activity, we are announcing further help for the people of Alberta.

Today, I am pleased to announce that in addition to the government of Canada providing future assistance through the disaster financial assistance arrangement, the government will also be matching individual charitable donations made to the Canadian Red Cross, in support of this effort.

The outpouring of goodwill and compassion from Canadians right across the country has not only been inspirational, it has been entirely characteristic of who we are and the fundamental human values we share as Canadians. …

Personally, I was in Fort McMurray four or five times over the past few years. Because one of those instances was a few visits for a byelection, I got to do a lot of door-to-door visits. I met with a number of homeowners, people who were rightly proud of the homes they had built in that beautiful town. To think now of the number of doors and homes that I knocked on and visited _ that all of us as politicians visit regularly _ and to see the pictures out of Fort McMurray right now that could have been taken in a war-torn corner of the world instead of our own backyard, is a reminder of how Canadians will and must stand together to support our friends and neighbours in this difficult time.

To those people who are displaced, please remember we are resilient, we are Canadians, and we will make it through this most difficult time together.