The season finale did what every teacher of drama says you shouldn't do: it was all climaxes 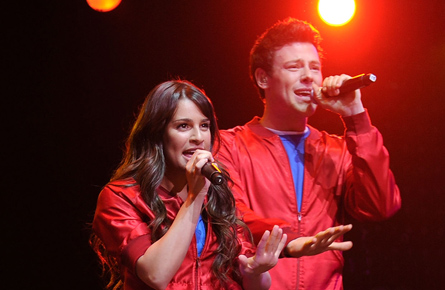 The season finale of Glee, while better-organized and more tonally consistent than most of the recent episodes, still brought home the thing that makes this show so unusual: it’s basically a series of moments, without much connecting tissue. Most musicals space out the big musical numbers, and dramas don’t usually have a big dramatic set piece without a lot of buildup. But because Glee is trying to pack a full-length musical and a full-length drama and a full-length comedy into 41 minutes of story, it cuts the connecting bits to the bare minimum, and makes every moment as big as it can possibly be. There are few small musical numbers, or little character moments that provide the foundation for the big scenes. In other words, it does what every teacher and student of drama says you shouldn’t do: it’s all climaxes. It’s like a musical where every number is “Rose’s Turn” (well, one number actually was “Rose’s Turn,” but you see what I’m getting at), a show where the intensity — whether comic or dramatic — is almost never relaxed. There is no repose. And, at least for now, it works. It’s not great drama, but it’s successful entertainment.

I’d compare Glee to shows like Family Guy and (on a higher level) 30 Rock, which are from the school of “scattershot comedy.” The basic idea behind that kind of show is to do a comedy with all the boring parts cut out and filled in with more jokes. They’ll barrel through the exposition, conflict, resolution stuff as fast as they possibly can, and make sure that a new joke is coming at us every few seconds. This means certain dramatic/structural values don’t get serviced (plus most of the characters become tiresome freaks). But it also means that there’s something new and entertaining all the time, and we don’t have to sit through dry set-ups in the hope that they’ll pay off with something funny later on.

What Glee is doing is taking that approach, familiar enough in pure comedy, and applying it to episodes that are twice as long, and include elements of scattershot drama. That is, it’s giving us the big juicy dramatic scenes without all the usual build-up, just as other shows (including Glee itself) give us rapid-fire jokes. I guess this isn’t a completely unfamiliar approach; you can also find it in daytime soaps, where the writers are often trying to avoid doing a scene that doesn’t have some big hook to it. But a soap opera scene will often start small and build to the big dramatic moment at the end. Glee doesn’t have time for that, because it’s doing three different shows at once and the scenes are very short. So whatever type of scene they’re doing will start big and end even bigger.

I think this works — at least, so far. It’s probably not something that is sustainable, though who knows; Family Guy has been a huge success on the same network by deliberately emphasizing small, self-contained, bite-sized comic moments. Fox’s intent in ordering Glee was to do a show that placed its faith in moments, rather than larger stories; it was created because the network was looking for a musical show whose songs could be sold on iTunes. In other words, they wanted a show where much of the content could be ripped from the episode and marketed in a self-sufficient kind of way. The whole show is filled with scenes that work on their own, as dramatic or comedic or musical units.

In this, it shares certain things in common with movie and stage musicals of the past: some musicals are organic wholes, but some are basically a collection of multi-media moments: now comes the hit song, now the dance number, now the romantic scene, now the comedy specialty. It doesn’t hang together, but it’s not supposed to. It’s an aesthetic that is actually quite old and strangely respectable, and which was described by music critic Conrad L. Osborne (I’ve quoted these words before in a different context) in 1968:

There is most certainly an aesthetic principle at work in the selection of characters and incidents — though an aesthetic principle which we have come to regard as foreign to serious art. It is, approximately, that the course of a work should be determined by whatever adds up to the most effective sequence of events, rather than by what is organic and necessary to the données of character and situation… People show up at the most improbable places and times simply because the theatrically effective thing is to have them show up.

So that’s what Glee is. It’s why I can’t fully agree with Matt Zoller Seitz on the Dennis Potter comparisons: the approach may be similar at times, and even the themes are similar at times, but the show isn’t using these numbers for a consistent, coherent purpose. It’s doing whatever seems calculated to produce the maximum amount of theatrical/dramatic impact. And in a time when many shows (of various kinds) can seem a little flaccid and unwilling to go for the big-impact scenes — you’ve got your spy shows like Chuck with not much action, or your comedies without big jokes, or your serialized build-ups to fights that never seem to happen — that concern with simple effectiveness is probably reason enough for the show to be popular. It’s a bit like 30 Rock, again: yes, if you hold it up to the absolute highest standard of television half-hour comedy, the constant jokes get in the way of its achieving that standard. But on the other hand… it’s got jokes. Lots of them. Many of them good ones. And that’s more than you can say for most shows. Glee has chosen to offer the fun stuff without worrying so much about what holds it all together, and that’s a flaw in theory; in practice, it’s hard to complain about it until such time as the fun stuff stops being fun.