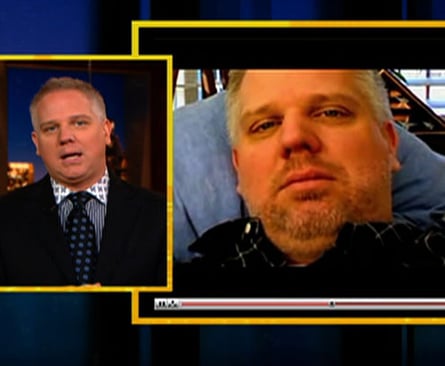 Last week was the week of Glenn Beck, the latest Fox News superstar. First the New York Times did a long, mostly respectful article about his Fox daytime show, which in a short time has become one of the highest-rated programs on that network. Then Stephen Colbert did a brutal parody of Beck’s “9/12 project” (where he encourages his viewers to recapture the good old time of the day after September 11), where he mocked Beck’s hysteria and paranoia, and reminded viewers of Beck’s 2005 statement that he was starting to hate the families of 9/11 victims. Beck is going to be around for a while, with an act that’s reminiscent of the Michael Douglas character in Falling Down. Even his haircut is similar.

The strange thing is that when Beck had his own show on CNN Headline News, similar in format to his Fox show (he asked a Muslim Congressman to “prove you’re not working with our enemies”), it was a ratings flop. He really isn’t any crazier on Fox than he was on CNN, where he praised the John Birch Society and increasingly echoed its views. His success on Fox News proves that TV success has a lot to do with knowing your audience. But it also shows that Fox News viewers are hungry for something more than they’ve been getting from O’Reilly and even Hannity; with Obama in the White House and an economic crisis that can’t be entirely solved with tax cuts, a simple attack on secular liberals is just not good enough. With his open nostalgia for 9/11 and his theory that Obama will bring in “fascism” and replace the dollar with another currency, Beck has proven that the key to conservative media success in the age of Obama is to take things up another notch. His whole show seems premised on the idea that Rush Limbaugh is too tame. And he’s also better than most Fox News pundits at really using the medium of television, which in turn makes for better YouTube clips and helps to make his stuff go viral; Colbert makes fun of Beck’s extreme close-ups and weird gigantic graphics, and rightly so, but it does give his show a more distinctive look than most.

Part of the secret of Beck’s new success is that although much of his rhetoric is standard conservative boilerplate (tax cuts are awesome) he has tapped into his viewers’ sense that there is a real crisis in the world that’s not easily explained. Many conservative pundits spend a lot of time, even now, claiming that the crisis is not as bad as it seems. Beck takes the opposite approach: he tells his viewers that the crisis is even worse than they can imagine, and that it’s the fault of various unnamed enemies who are conspiring to bring them down. He never says who these enemies are, referring to them only as “them” and telling his viewers that “they don’t surround us, we surround them.” The upshot is the same as that of every other show on Fox News, that liberals are to blame for all our problems, but it’s just done in a more expansive way, leaving his viewers free to be scared of just about everybody in the universe. (Sean Hannity is very popular too, but he’s obsessed with old favourites like the Dixie Chicks. Beck is the only Fox News host who’s come up with new ways of getting angry.) Explaining away disturbing economic realities as the product of a nefarious, shadowy conspiracy is a traditional thing, and not just on the right. Beck is the perfect host for an audience that wants someone to blame for today’s problems, but doesn’t want to be too specific about the cause or potential solutions.

The other thing Beck has going for him is the sincerity factor — either he really believes what he’s saying, or he’s doing a better job of acting than most pundits do. Bill O’Reilly is, as you can tell from his talk show appearances, an intelligent man with a sense of humour; he’s clearly not a nice person, but his pundit persona is at least partly an act, and he wants us to know it. Rush Limbaugh believes in a few things (low taxes, mostly), but also hides behind humour; he’s like Andrew Dice Clay, making outrageous, offensive statements (“feminazis”) and then accusing people of having no sense of humour when they get offended. Though Beck used to try and sell himself as a funny guy, he now spends much of his time weeping on the air (“I love my country, and I fear for it”) and screaming at his audience with wild-eyed, fanatical conviction. With Limbaugh or O’Reilly, it’s always possible to believe that they don’t really mean everything they say, if that’s what you want to believe. Beck is either genuinely crazy, or wants us to think he is. He even openly compares himself to Howard Beale from Network, a character who was quite literally insane. Sean Hannity also has the sincerity thing going for him, but unlike Limbaugh or O’Reilly, Hannity comes off as not very bright; he portrays himself as the good-looking manly-man who crushes wimpy intellectuals. Beck’s persona is a new one; the character he’s portraying is someone who’s not dumb, not angry, not jokey, just nuts.

So that’s the new face of TV punditry. And there’s going to be a lot more of this, not only from Beck. But the reason for his newfound success may be not only that he moved to Fox, but that there’s a Democrat in the White House now. One of the differences between left-wing and right-wing conspiracy theorists, particularly in the U.S., is that left-wing conspiracy theorists tend to believe that all parties are part of the conspiracy (though some of them modified this idea after the Nader disaster of 200o), right-wing conspiracy theorists in the U.S. are basically Republican partisans. Beck rages against powerful elites, but always uses terms like that to mean “Democrats”; he claims that both parties have failed America, but always makes it clear that only one party is actually out to destroy America. But his viewers feel the same way; despite occasional tut-tutting of Bush’s big-government tendencies, most of them weren’t going out and stockpiling guns between 2001 and 2008. He’s playing to an audience that assumes that government wasn’t the problem in the ’80s or most of the ’00s, but has now re-discovered the idea that government is to be feared. He’s the ideal pundit for the age of “tea parties” and everything else built on the assumption that government was the problem only from 1977 and 1980 or 1993 to 2000.

This is why Beck might (I said might) turn out to be a flash in the pan. Rush Limbaugh is effective at any time, because he isn’t dependent on who’s in power: his target is always just “liberals,” and he can attack them no matter who’s in the White House. Beck might actually be completely a creation of the Obama era, someone whose rhetoric appeals to viewers who only became anti-government on January 20, 2009.