Too many soloists in 'The Soloist'

Opening Weekend: patronage as a blessing and a curse in 'The Soloist' and 'Three Monkeys' 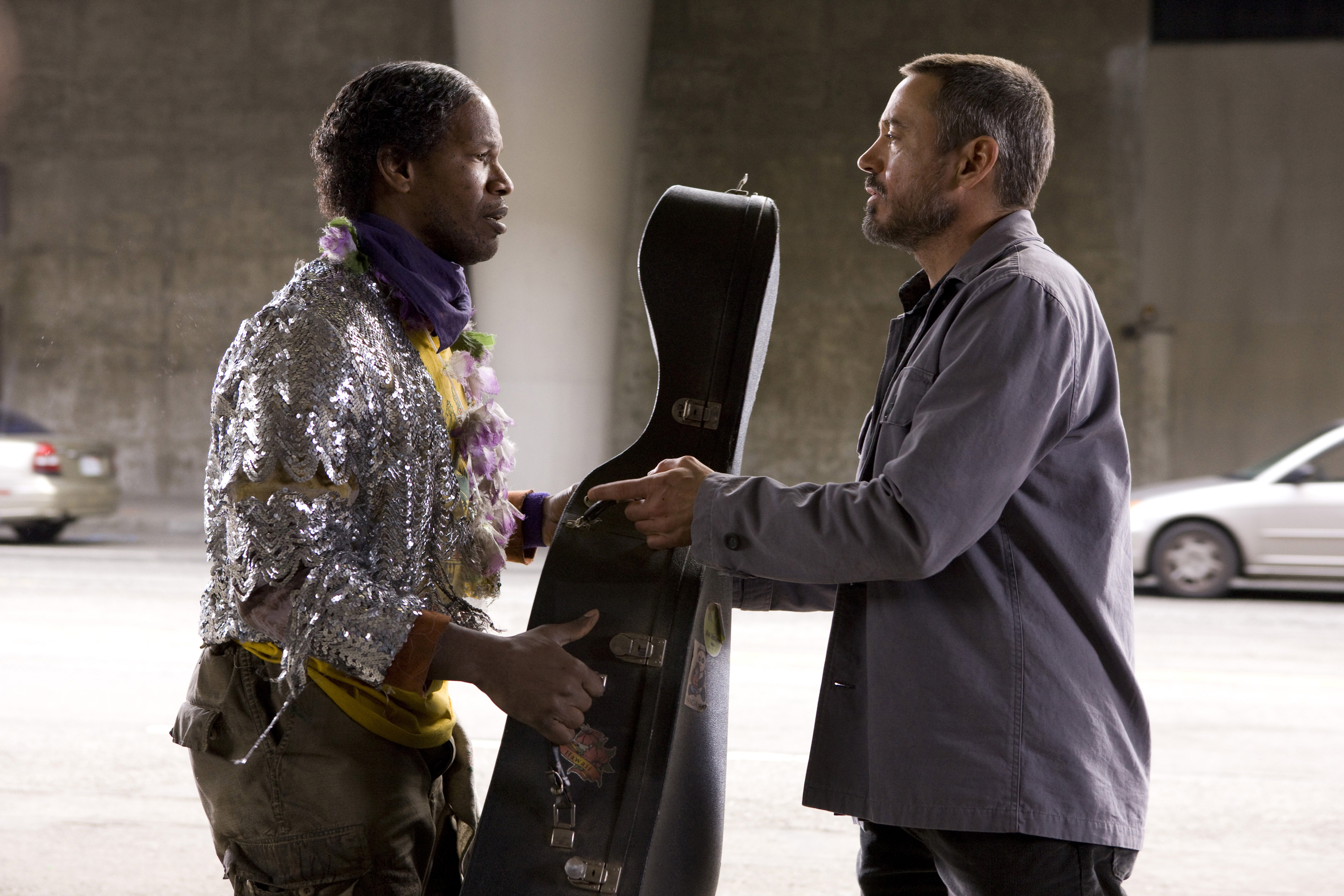 Jamie Foxx (left) and Robert Downey Jr. in 'The Soloist'

It’s a good week, with two films I can recommend, hailing from opposite ends of the cinematic spectrum. One is The Soloist, which offers a virtuoso acting duet by Jamie Foxx and Robert Downey Jr. in the real-life story of a homeless, schizophrenic musician and the journalist who tries to rescue him from Skid Row. It’s a Hollywood movie  based on the best-selling book of the same name by Los Angeles Times columnist Steve Lopez, and though marred by some fictional flights of fancy, it’s worth a look. The other film is Three Monkeys, an exquisitely crafted  noir drama from Turkish auteur Nuri Bilge Ceylan, who won Best Director at last year’s Cannes Film Festival, along with  lavish critical acclaim. Imagine Hitchcock through Antonioni’s lens.

I have have a habit of trying to tie reviews together, at least for the sake of a headline. But these pictures have virtually nothing in common, in style or theme, aside from one spurious connection: they’re both about benefactors who offer patronage with strings attached to a man who’s in no position to say no. In the case of The Soloist, the godfather is a good man—a cynical journalist with a heart of gold who redeems himself, and his protégé, in the process. In Three Monkeys, he’s a corrupt politician who exploits his chauffeur and his family with a galling venality that takes on Shakespearean proportions.

Despite the looming extinction of newsprint, the noble newspaperman remains one of Hollywood’s most enduring heroes. And the shaky status of his profession seems to have enhanced his mythical aura. Last week in this space, I wrote about the crusty stereotype of the crusading journalist played by Russell Crowe in State of Play, a preposterous piece of conspiratorial fiction, which I relished as a guilty pleasure. The Soloist is a better movie, and the journalist is a more credible hero. But it’s curious to see how the balance of truth has been tilted in the move from the page to the screen. Although Steve Lopez retains his real name in the film, his character has received a fictional make-over, turning a family man into in a jaded, hard-bitten journalist with a ruined marriage—more in line with the Hollywood stereotype of the self-destructive newspaperman. And the story’s centre of narrative gravity has been displaced from the subject to the storyteller. Lopez was not primarily writing about himself, even though his life and personality inevitably worked their way into his columns and the book on which the movie based. But screenwriter Susannah Grant, best known for transforming Erin Brockovich into a movie heroine, has deliberately shifted the movie’s focus to Lopez’s character. (For more on this, and an interview with Soloist director Joe Wright, go to my piece in last week’s magazine, Writer discovers homeless virtuoso). And the fictional make-over is a mixed blessing.

As embodied by the brilliant and mercurial Robert Downey Jr., a more neurotic and distressed Lopez becomes a mental case in his own right, holding his own with Foxx’s character, the homeless schizophrenic, Nathaniel Ayers. This sets up a kind of duel of thespian virtuosity. Both performances are rich, detailed and engrossing. But with Robert Downy Jr., I felt I was watching the actor pull off another sublime, back-handed tour-de-force; whereas with Foxx, although he’s playing an outlandish and flamboyant figure, I felt there was a genuine attempt to inhabit, and honour, a real-life character, not to mention an alien state of mind. Foxx’s musical talent serves him well, not only in miming the cello and violin, but in executing the jazz-like leaps of free association in his dialogue, which is itself a kind of soloing art.

British director Joe Wright doesn’t entirely succeed in scuffing up the tony pedigree that he brought to period films such as Pride and Prejudice and Atonement. Verité just doesn’t seem to be part of the man’s vocabulary. Although he shot in grubby downtown locations and cast actual homeless people, there’s a formal sense of composition to the entire film, a showy elegance that sometimes undermines its claim on street-level realism. Even the costumes of the homeless folk seem a touch too, well, costumed, betraying more artful disshelvelment than genuine grime. And some of the script embellishments strain for a forced narrative harmony. Catherine Keener’s character—Lopez’s divorced wife who’s also his acerbic editor—is a total invention, and not really necessary, except to gild the tale’s bilateral symmetry, so that the journalist can be “homeless” in his own right. The movie’s driving theme is that these two isolated characters are chained together by circumstance—like the black man and white man in The Defiant Ones—and redeem each other through an unlikely friendship. That’s what makes it a Hollywood movie.

On the other hand, I would never complain about having to spend time with Catherine Keener. Both Downey and Foxx are a treat to watch. And although Wright’s own display of virtuosity can be distracting, the veracity of the real-life story still shines through the film’s grand architecture. There’s intelligence and beauty in Wright’s direction, especially in the way it weaves a classical score with an urban landscape. The film makes concrete Ayers’ vision of Los Angeles as a city ruled by Beethoven, most tangibly in the symphonic aerial shots, which revel in L.A.’s dizzying geometry. The movie’s primary locations—Skid Row, the Los Angeles Times building and the gelato swirl of Frank Gehry’s Disney Hall—all lie within the radius of a few blocks, offering a graphic opportunity that Wright fully exploits.

We always like to think that the book is better than the movie. I’ve read Lopez’s book, and it’s certainly closer to the truth of what happened. And the sentiment is less forced than the movie’s. But aside from putting flesh on the bones of characters, there are ways in which a movie can surpass a book. In this case it’s through the power of music—both aural and visual. 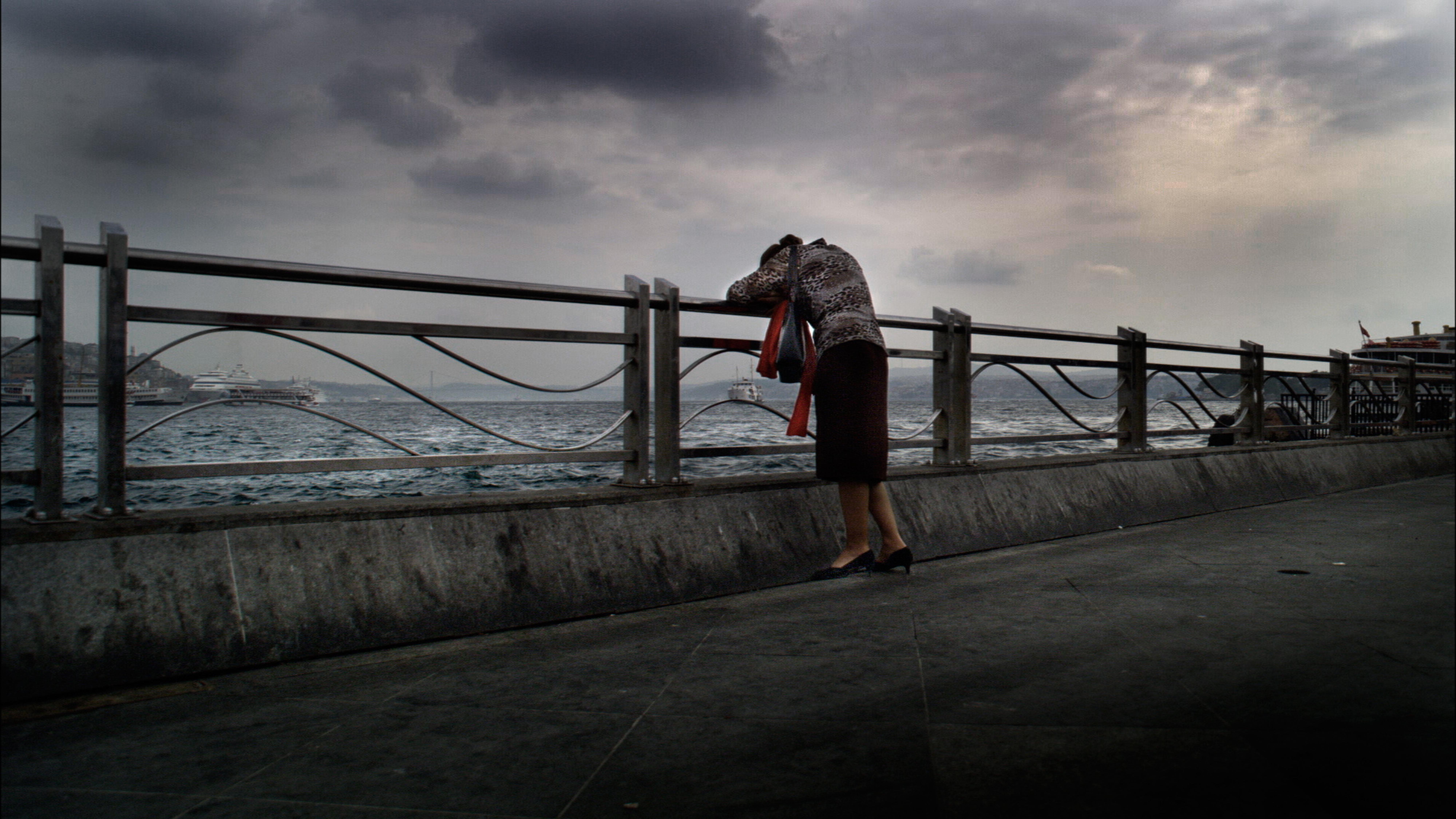 Among contemporary auteurs, Turkish director Nuri Bilge Ceylan has become a personal favorite, although it took a while for me to warm to his work. A former still photographer, Ceylan has such an exquisite sense of composition that some of his tableaux look more painted than shot. But his films can be tests of patience. He has a fondness for static frames and long, real-time takes that fine-tune the subtlest shifts of light, movement and emotion. I became an outright fan after being blown away his previous feature, Climates, which was one of my top ten picks two years ago. When I saw his latest feature, Three Monkeys, in Cannes last year, I was less enraptured, feeling that the languid pace and fetishized visuals slackened the tension required for a noir intrigue. But this film sits well. And after taking another look at it, it stands out as an early contender for this year’s top ten list.

The story revolves around a politician (Ercan Kesal) who kills someone in a hit-and-run accident while driving alone. The politician is running for re-election, and can’t afford a scandal. So he convinces his chauffeur (Yavuz Bingöl) to take the rap, and serve jail time, promising him a financial reward for keeping his secret and doing time. The politician, who has a limitless sense of entitlement, then has the nerve to seduce his chauffeur ‘s wife (Hatice Asian), promising her anything she wants, while her husband is behind bars. Caught in the middle of this web of deceit is her moody teenage son (Ahmet Rifat Sungar), whose simmering discontent comes into distressing focus when his suspicions of his mother’s adultery are confirmed.

It’s a strong story, with a slow but inexorable momentum. Ceylan has marshalled a quartet of superb performances. His camera is more mobile than usual here, moving and lying in wait with a voyeur’s stealth. His palette of desaturated colours is ruled by ghostly greys and greens, even in the exteriors, as if a sickness lies over the land. The pull of destiny is palpable, conjoined with a quiet suspense. Only Ceylan can create dramatic tension for a shot of a man sleeping. And he composes certain images that linger in the mind’s eye as mini-masterpieces, especially the final showdown, which takes place on a windswept shoreline, shot from a distant perspective that recalls the scene in the park in Antonioni’s Blow Up. The movie begins and ends with acts of violence that are not shown onscreen. This is a drama of aftermath, a Dostoyevskian sense, a story of un-erasable crime and unending punishment.