Loving 'The Road' and the plastic fantastic 21st century 'Fox'

Opening Weekend: stubborn dads go off the grid in harrowing drama and an exhilarating fable 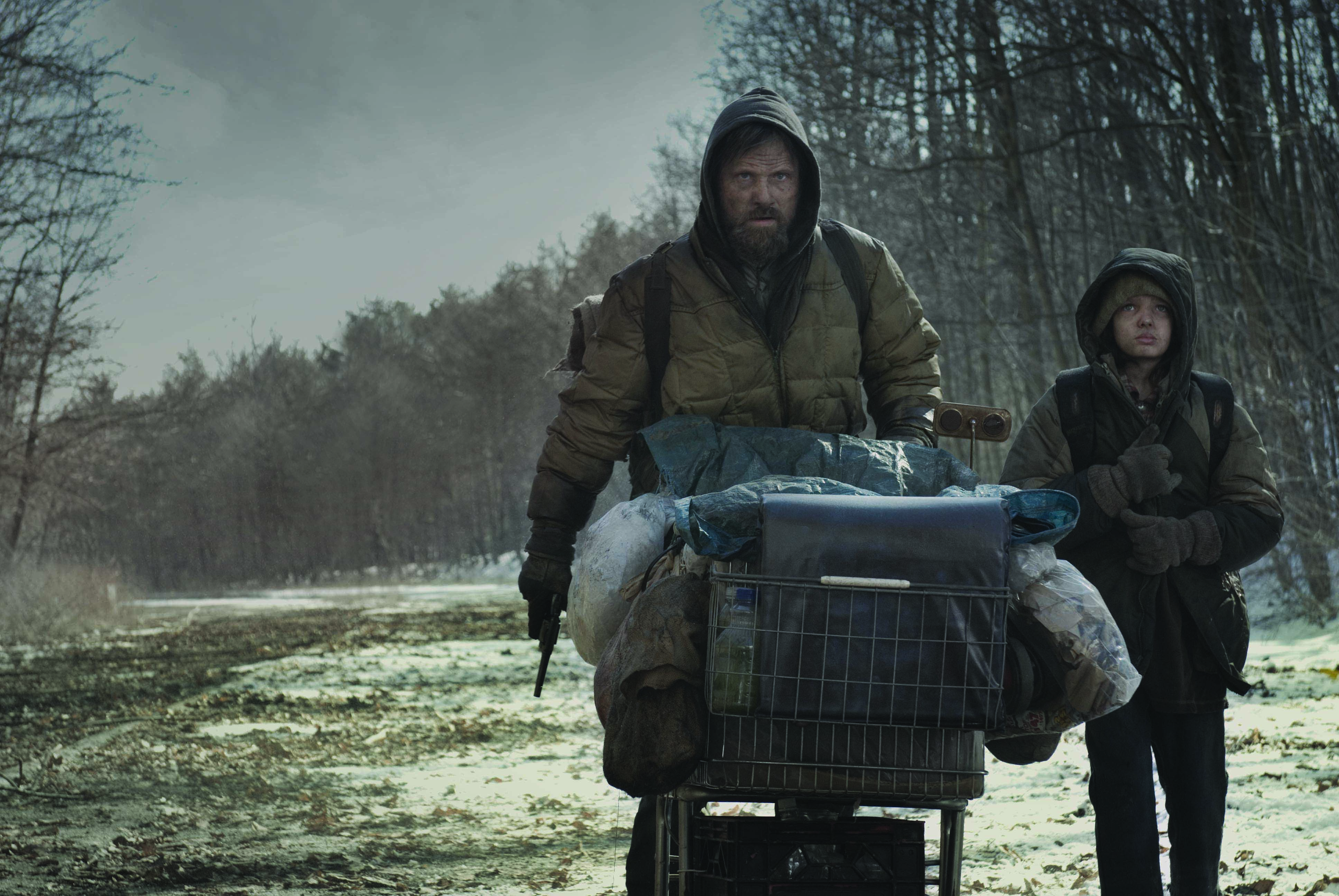 The sky is falling at the multiplex this weekend, with two new movies about indomitable dads trying to survive the end of the world as they know it.  Take your choice between grim and giddy, and between a bunker and a foxhole. The Road is a gruelling post-apocalyptic odyssey based on the novel by Cormac McCarthy, with Viggo Mortensen starring as a widowed survivor dragging his son through the barbaric ruins of America. The Fantastic Mr. Fox is a stop-motion animated feature directed by Wes Anderson (Rushmore), with George Clooney voicing the role of Mr. Fox, whose compulsive banditry turns his family into homeless outlaws.  I can heartily recommend both movies, although they offer utterly different experiences. Featuring superb performance from Mortensen and Kodi Smit-McPhee, who plays his son, The Road is one of the year’s strongest dramas. But it’s no picnic, to say the least. The Fantastic Mr. Fox, on the other hand is a tonic, a painless treat, and although we have yet to see Disney’s The Princess and the Frog, it stands out as the year’s wittiest animated feature. And in an era of computer generated spectacle, both films have a rare physical realism.

Like No Country for Old Men, another Cormac McCarthy adaptation, The Road should make a significant dent at the Oscars, although it’s not as much fun: unlike the Coen brothers’ movie, John Hillcoat’s sombre epic is painted in shades of grey, not noir. It’s set in a world where there’s nothing left of civilization, including its sense of humour. And there’s no villain to speak of, just zombie-like hordes of cannibal vigilantes who roam a barren, burnt-out landscape under a permanently leaden sky. This is no 2012: it’s about an America where the havoc has already been wreaked, without explanation, and no one’s in Kansas anymore. Whether from a nuclear blast or a cosmic collision, this scorched Earth is a dirty, barren mess. There’s no power, no vegetation and virtually no food. Everyone’s a refugee and some of them want to eat you.

This scenario is not as lurid as it sounds. The film is on one level a horror story, and its protagonists never stop being fugitives from whatever vicious threat is around the next corner. But it’s also a touching story of a tunnel-visioned father and his open-minded son, between Man and Boy as the characters are named in the book and the credits. Man (Viggo Mortensen) has lost his faith in humanity and sees every stranger as a potential enemy; Boy (Kodi Smit-McPhee) is a compulsive Good Samaritan always willing to give the benefit of the doubt.

What elevates the The Road from mere melodrama is its visual poetry. It’s a painterly epic, a landscape movie that has the austere beauty of an Edward Burtynsky photograph. There’s a scarily familiar realism to the desolation, and that’s because it’s not of the computer-generated variety. The filmmakers found a lot of their post-apocalyptic landscapes in Pennsylvania—in devastated coal mining areas, dump sites, an abandoned turnpike, and a derelict theme park. They also found vistas of natural devastation in volcanic landscapes and Katrina-ravaged areas of Louisiana.

The movie is emotionally draining and taut with scenes of visceral horror. It’s tasteful melodrama with a ripping narrative at its core, shrouded by a thick ozone layer of sentiment. There are flashbacks to a glowing, sunlit family life before the apocalypse, featuring Charlize Theron as the wife who elects to kill herself rather than risk being the victim of rape and cannibalism. The flashbacks, like a lot of film flashbacks, seem superfluous. But coincidentally, the Boy, Smit-McPhee, has a quite uncanny resemblance to Theron, so you almost see glimmers of the dead mother through his eyes. And his performance has the preternatural conviction of an actor who hasn’t yet learned to separate himself from the moment. The narrative is very much a two-hander, between father and son, but minor characters pop up along the way, played by actors including Molly Parker, Guy Pierce—Robert Duvall delivers a cut-gem cameo as the Old Man.

The movie remains largely faithful to McCarthy’s book, although the story’s ending, which I won’t spoil, seems to take on a more sentimental hue onscreen. Hollywood is always determined to salvage redemption from even the darkest scenarios, and in this case the film tries to leave us with more hope than the story deserves. But it’s a helluva trip. 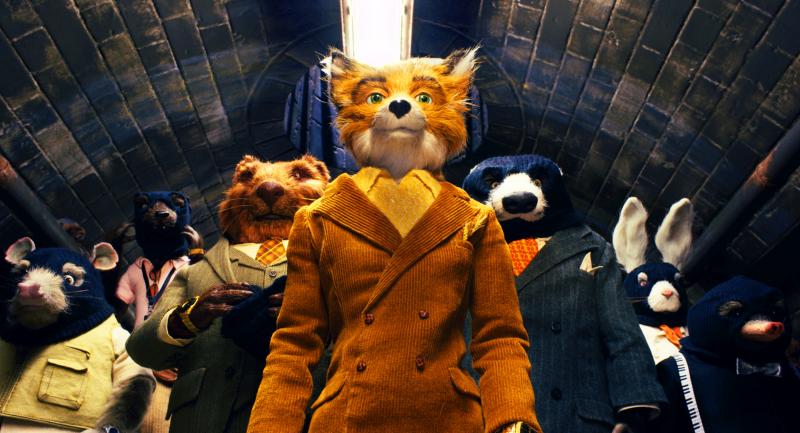 This movie went pinwheeling by in a brilliant flash of whimsy. Even while I was watching it, I kept wanting to stop the stop-motion and see it again. Sure, it’s a cartoon, but it’s a lot smarter and more mature than most of the live action movies that make claims on intelligence. Director Wes Anderson is the agile mind behind it, adapting the 1970 work of Ronald Dahl. And it bears the director’s distinct signature. The Fantastic Mr. Fox is the kind of gonzo fantasy worthy of the precocious high school kid played by Jason Schwartzman in Rushmore (1998), Anderson’s breakout film. Its zippy spirit and wild ambition reminded me of the pageant Schwartzman’s character mounts in Rushmore‘s finale. Schwartzman, in fact, is among the stable of Anderson actors with voice roles in the movie. He plays Ash, the insecure son who wears a white cape in honour of his favorite superhero, and who deeply resents the affection heaped on his visiting cousin, Kristofferson (Eric Anderson), an athletic zen genius of a golden boy. But the film belongs to George Clooney, who has the starring voice as Mr. Fox, the over-zealous dad. He’s like Homer Simpson on steroids, getting everyone into a heap of trouble because of his big ideas and irrepressible mischief, then jumping through creative hoops to fix things. He and his level-headed wife (Meryl Streep) are just settling into a nice life in an upscale foxhole when Mr. Fox, like Danny Ocean itching to pull another heist, sneaks out of the house for one last chicken raid. He provokes an evil axis of angry farmers, led by the Gestapo-like Bean (Michael Gambon), who unite to drive the Fox family out of their home and into hiding as an underground resistance.

It’s an action movie of sorts. The story is fired by Tarantino-like bursts of comic action and a brisk, off-kilter wit. Clooney is terrific. He’s finally nailed the comic persona that’s submerged in the Vegas cool of the Oceans franchise and hides behind a deadpan mask in the Coen brothers movies. It’s as if he’s been liberated by not having to haul his hunky good looks in front of the camera. There’s a sense that he’s playing his secret self, with the playful edge of devil-may-care repartee that he brings to his press conferences. And he’s well supported by a troupe of distinctive voices, including Bill Murray’s Badger, Willem Dafoe’s Rat, and Owen Wilson’s Coach Skip.

The film’s hand-crafted style has a tangible beauty that’s never simply cute or flashy, always intriguing. The stop-motion construction is more than a conceit. In an age of over-produced computer animation, it creates a world of physical realism full of human (yet foxy) warmth. Flat 3D. I found myself continually doing double takes and wanting to revisit what had just flashed by, as if the film was generating its own stop-motion nostalgia.

Like the best of The Simpsons, the humour has a split-level subversion that will make both adults and children feel smart for getting the jokes. The word “cuss” becomes the all-purpose surrogate for swear words, as in “the cuss I am” and “are you cussing with me?” Oh, and did I mention the soundtrack? Pure gold.