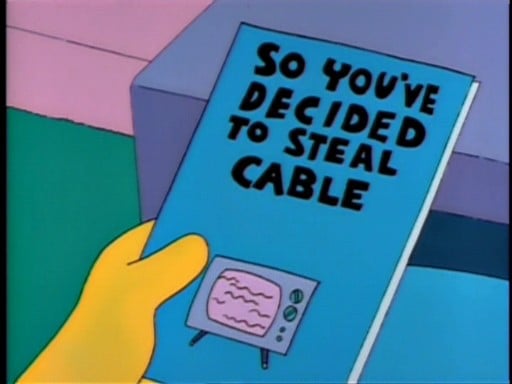 There’s more discussion lately (See here and also here for starters) about whether cable has plateau-ed and whether its superiority over broadcast is about to end. I talked about this in an earlier post, and don’t want to repeat myself too much, but I do think that ultimately we’ll always be talking about different standards.

The U.S. broadcast model is not very receptive to the most acclaimed format, the serialized show that is not just a soap opera. Cable is perfectly suited to that type of show, while broadcast network TV shows struggle to do the same thing with 22-episode seasons and more commercial pressures. So I don’t think it likely that the complex serialized drama will make its home on broadcast television, though “not likely” doesn’t mean “impossible.” The reason you can’t do Breaking Bad or Mad Men for broadcast isn’t about censorship or network notes, but about the big difference between 13 and 22 episodes a season, and also about what constitutes success and failure. A success on cable is a show that does well enough not to be a flop, while enhancing the network’s brand and drawing more people to the network overall.

One reason why broadcast comedy dominates the Acclaim Sweepstakes now is that half-hour comedy strips away most of cable’s advantages. Comedies don’t have to be serialized to be acclaimed – if they get too serialized, they can come off as not really being comedies at all, like some of HBO and Showtime’s half-hours. They benefit from the longer seasons because there’s more opportunity to let all the characters shine, and the smaller writing staffs of some cable comedies become a disadvantage compared to the flood of jokes that 30 Rock‘s large staff can dish out. (Cable comedies often run into the problem that Canadian half-hours run into: they can’t afford the writing staffs that led to The Simpsons’ huge volume of jokes.) So while the award-winning comedies are mostly not the ratings winners, they are mostly shows where you don’t absolutely have to watch every episode, and that follow an episodic formula. Broadcast-type shows, in other words.

I think, with drama, there is an argument to be made (I’ve made it) that the cable standard is not inherently superior to the broadcast standard. But it’s a different type of thing. A great broadcast drama is great like a big wide-release movie or novel that subverts or tweaks its formula. An episode of such a show is like a popular song: it follows a formula that was handed to the writer, and greatness is achieved by doing something special within that basic form. A cable drama is trying to give the appearance of smashing the formula, or turning it inside out, or disguising it. It wants to move or shock you without reference to the pre-existing patterns, though it will inevitably use elements of them anyway.

So how do you compare something like NCIS, which surprises its intended audience with subtle variations on the things that happen every week, with a serialized cable show that is more free-form when it comes to constructing an episode? It’s like comparing a baroque aria, with its rigid A-B-A format, to a free-form symphonic poem. The rigidly-formatted work is not necessarily inferior but it is certainly more predictable. You could say that the broadcast show is basically “Classical” TV – here are the elements you must include, now try to surprise us. And cable tends to be more “Romantic” – let’s blast through form and convention and go where the creator wants to go. I would be happy to say that some Classical TV shows are better than some Romantic TV shows, but it’s hard to compare them on a case-by-case basis, and the Romantic type of show is easier to analyze because there aren’t as many things we have to give up for lost at the start of the review.

What interests me most about the cable vs. broadcast issue, though, is that cable networks aren’t only owned by the same corporations as broadcast networks: many of them are really dependent on the continued viability of the broadcast model. This is less true of pay cable networks, which rely more on the continued viability of big theatrical movies. But many basic-cable networks make their money where the money usually is: by showing reruns of big broadcast network shows. FX enhances its brand with Louie and It’s Always Sunny In Philadelphia and Justified, but it spends a lot of its time showing endless Two and a Half Men repeats. USA is the NCIS network and recently won a bidding war for the rights to Modern Family. These network need pre-existing shows and movies that are major hits, or at least are more broadly popular than a scripted cable show tends to be. In other words, cable TV needs broadcast shows and blockbuster movies.

If broadcast networks were to go to a cable-style model, the real losers would be cable networks. Maybe broadcast could figure out how to make money off scripted shows with Fringe-level audiences, plus some reality shows that don’t do well in repeats. But without a supply of broadcast hits, cable would be weakened. Some cable networks have already taken to producing original shows in the style of the hits broadcast networks aren’t supplying any more (black sitcoms on TBS and BET; sitcoms about middle-aged and older people on TV Land). These can help fill some of the gaps, but even when they reach 100 episodes, scripted cable shows rarely do as well in reruns as the broadcast shows do. (Partly because cable just isn’t as good at it; a Chuck Lorre show is going to be a better mainstream comedy than most cable attempts at the same type of thing.) A broadcast show with mass appeal, self-contained episodes, and 100+ episodes is still the kind of thing cable networks need to stock up on.

All of that may eventually become moot, since both broadcast and cable are facing huge troubles: broadcast is losing its audience, and cable is losing its subscribers to Netflix and other places. But for now, that may be the main distinction between broadcast and cable, given that (as Poniewozik says) viewers don’t necessarily know or care about the difference. But broadcast is still in the popular mass entertainment business, not as much as in the past, but more than cable – and the popular mass entertainments have to keep coming, or cable will find it harder to produce the big expensive risk-taking scripted shows. Ironically, the best way for broadcast to overtake cable creatively may simply be to get even worse than it currently is at coming up with Two and a Half Mens and Law & Orders.