The less he tried to be funny, the funnier he was 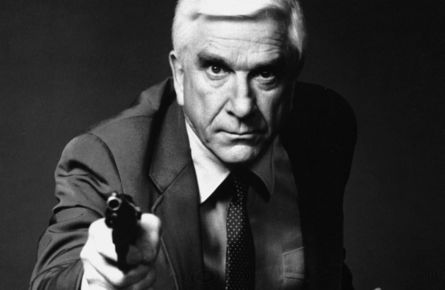 I waited to post this until there was confirmation that it’s not another Gordon Lightfoot type of report. Very sadly, it’s true: Canadian actor Leslie Nielsen is dead.

Most of what can be said about him has already been said. The amazing thing about him is that he managed to build a second career as a comic actor, far more successful than his first career as a serious actor (though that career was hardly shabby; he worked constantly, which is one of the reasons he was cast in Airplane!), without changing anything fundamental about his approach. In fact, the less he tried to be funny, the funnier he was. His Frank Drebin was still funny in The Naked Gun as a Clouseau-esque idiot, but he was even better in Police Squad! as the most competent cop in an insane universe.

That’s one of the reasons you can’t completely separate his first career from his second. As I said, his selection for Airplane! was based upon the fact that he’d been in so many “serious” TV shows and movies. The casting director didn’t understand why the directors wanted him, telling them something to the effect that “Leslie Nielsen’s the guy you hire at the last minute when you don’t have anybody else.” (He was busy, but never an A-list actor, so that’s not as cruel as it sounds; he worked steadily without being first choice for a lot of big roles.) But all the major parts except the leads had to be cast with actors who could, and did, appear in movies as po-faced and un-ironic as Zero Hour! Nielsen was like Margaret Dumont: he knew it was a comedy, but he managed to brilliantly convey the impression that he didn’t know it was a comedy. That certainly takes skill.

Here’s a clip of Nielsen in his serious working-actor days: he appears at the 1:20 mark in this clip from the TV series, Bracken’s World, an à clef Hollywood series that tried to capitalize on the success of inside-showbiz soaps like Valley of the Dolls. As so often, Nielsen was not first choice: the studio boss he played was originally supposed to be a never-seen character, and then when they retooled the series in season 2, they hired Nielsen to play the now-visible title character. In this clip he tries to talk an actress into doing a nude scene, a plot that was surprisingly popular on TV in the late ’60s (since it allowed them to at least talk of all the new sexual frankness in movies, even though they couldn’t actually do anything like that on network TV) .

And from his comedy career, on Police Squad!, a compilation of one of the most famous running gags in a six-episode series that consisted of almost nothing but running gags: the “freeze frames” where the actors all froze in place even though the film didn’t freeze — and where some characters, or monkeys, remained un-frozen.

Also, I wonder, if the show had gone on longer than six episodes, would they have eventually taken up most of the episode listing the names of the people who were arrested in the previous episodes?