Opening Weekend: Film reviews of "Crossing Over," "Gomorrah" and "Rip: A Remix Manifesto" 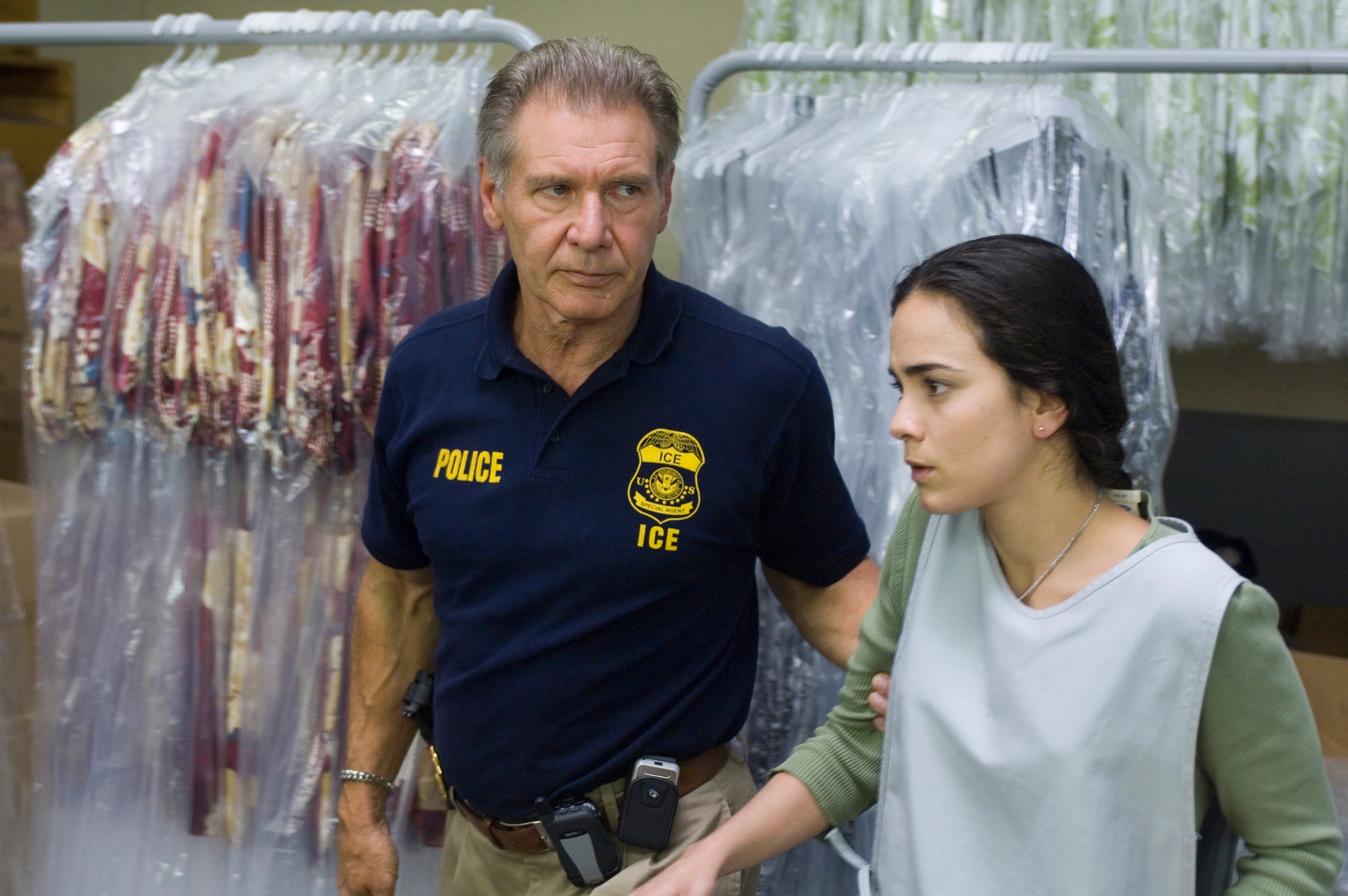 Harrison Ford and Alice Braga in 'Crossing Over'

Pity the poor immigrant. That’s Harrison Ford’s job in Crossing Over. He plays Max Brogen, an Immigrations and Customs officer who raids Los Angeles sweatshops to round up illegal migrants. He has a soft spot for pretty young women, and deliberately lets them slip through his fingers. But it’s strictly paternal. This crusty veteran is a good cop, just trying to eke some altruism out of a dirty job—unlike Ray Liotta, who’s typecast as a sleazy bureaucrat who fast-tracks a citizenship application in return for sexual favours. They are just two of the multiple protagonists riding the eight-lane narrative freeway of Crossing Over, an L.A. ensemble piece that’s derivative of Crash and Babel, but not in the same league as either. Employing realism as a style while undermining it with cliche, it’s heavy-handed, moralistic and confused. The movie is not unlike Ford’s tormented character, as it tries to expose and aggrandize the American Dream at the same time.

Sometimes it takes a while to figure out what’s wrong with a film. With Crossing Over, the viewer’s heart sinks in the first few lines of dialogue a hard-boiled colleague establishes Ford’s character for us with a clunky line-reading: “Jesus Christ, Brogan! Everything is a goddamn humanitarian crisis with you.” This is not a Harrison Ford movie. He just keeps his head down and does the job—acting with that one-note level of total intensity that he likes to bring to Serious Drama, as if he’s haunted by more backstory than we could possibly imagine. His job in this ensemble is to track down a Mexican factory worker (Alice Braga), who has escaped during a raid. He doesn’t want to rescue her, just reunite her with her son, and get her to safety. His colleagues make cracks about him lusting after pretty young things, but that innuendo is left undeveloped. It makes you wonder if Harrison, who’s been known to refinish his scripts, has a clause in his contract exempting him from non-virtuous behavior.

But things get especially ludicrous, and lurid, when Liotta, as the vile bureaucrat, steps up to the plate. He happens to drive his SUV into a car driven by a sexy young Australian starlet (Alice Eve), who has blindly backed out of a parking spot after a frustrating session in the immigration office. Shades of Crash. Liotta’s character seizes on the opportunity. He offers to let the starlet off the hook, and get her a green card by fudging her status, if he can can treat her as his whore any time he wishes during an entire month. Inconceivably, she agrees to the deal, which allows the filmmaker to indulge in a series of tasteless sex scenes with gratitous nudity. Not that I am opposed in principle to tasteless sex scenes with gratuitous nudity. But when they involve a repugnant Ray Liotta, and are staged with a pretense to instill moral outrage, it all gets rather unsavory.

Liotta’s character, meanwhile, married to an immigration lawyer (Ashley Judd), who’s trying to prevent the deportation of family whose teenage daughter has written a provocative essay empathizing with 9/11 hijackers. Another storylines concerns an Asian teenager who has been conscripted by gangbangers just as his family are about to become citizens. And finally, a cavalier British rock musician (Jim Sturgess) fakes his Hebrew pedigree in an attempt to secure immigration status as a Jewish religious teacher. He’s the comic relief: faking your way into America to be a rock star is cool, as long as it’s done with the right roguish spirit.

Crossing Over is not one of those multi-storyline narratives that shuffle time frames and mess with our head—it’s not Pulp Fiction, 21 Grams or Babel. Written and directed by Wayne Kramer (The Cooler), it’s all too conventional, a prosaic melodrama composed of characters who turn out to be strictly good or evil. We already know that immigrants are exploited. Crossing Over tries to tell us that once again, while compounding the offence. 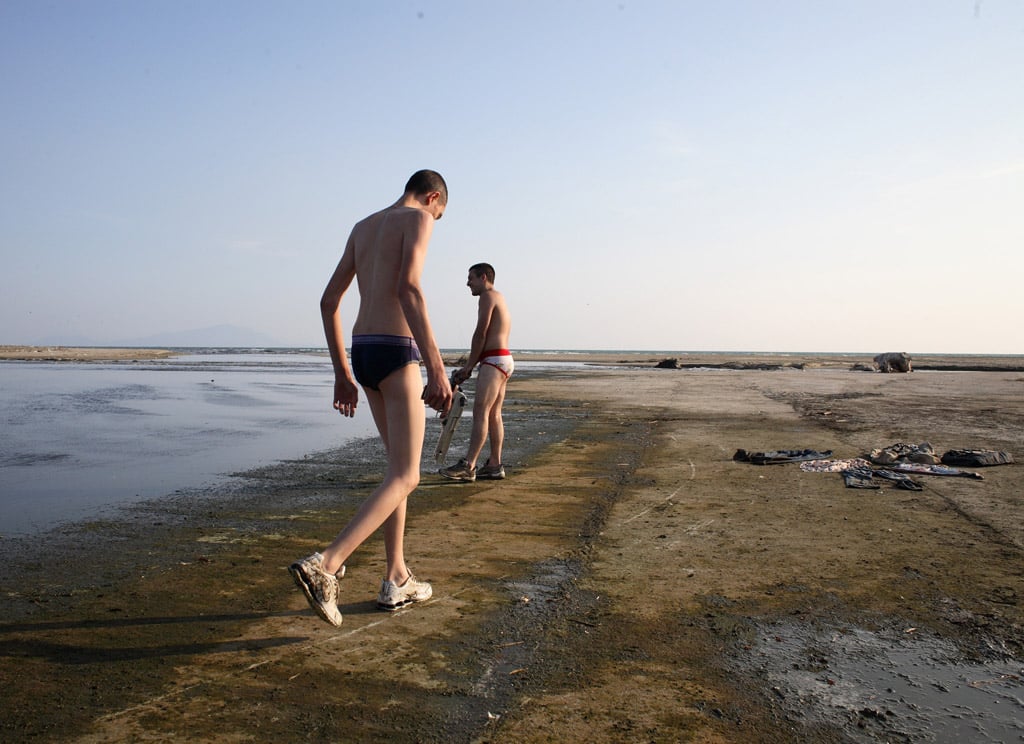 This is another multi-channel narrative, a weave of five storylines, but it earns its complexity and rings so true there’s never any sense of contrivance. If you’re weary of viewing the Italian Mafia through the stylized prism of movies like Scarface and The Godfather, and are looking for the real deal, this is about as close as you want to get. Gomorrah is a mob story so authentic and gritty it makes The Sopranos look like Ozzie and Harriet. Which is not to say I’m recommending it without reservations: a visceral epic about violence and corruption, in which none of the characters are people you would ever want to hang out with, is not easy to endure. But it’s a superbly crafted piece of filmmaking that offers an on-the-ground glimpse into the social economy of crime.

Directed by Matteo Garone, Gomorrah is based on Roberto Saviano’s 2006 best seller, which caused such a great sensation when it was published in Italy that the author was forced into hiding, and remains under round-the-clock security protection to this day. Operating his own camera in a strictly verité style, Garone filmed the movie on location in the crime-ridden suburbs of Naples, such Secondigliano and Scampia, which is home to a massive open-air drug market. The landscapes are as prominent and autere as the characters, from a barren concrete apartment complex that’s riddled with mob activity to the toxic wastelands where children play and bodies disappear.

The interwoven storylines deal with ordinary people who become enmeshed in the operations of the Camorra, a crime syndicate that doesn’t just control arms and drugs but penetrates every aspect of life in the provinces of Naples and Caserta, from the manufacture of designer suits to the disposal of toxic waste. The characters range a pair of gangly youths who act out of gangster fantasies inspired by De Palma’s Scarface to a tailor who risks his life by selling the secrets of his trade to Chinese competitors. Beginning with the gruesome incident that opens the film, of a murder in a tanning salon, the stories don’t lack in drama, but they are based on real-life incidents. Gomorrah is basically about plight of civilians who get caught in the crossfire of a war zone. In the past 30 years, according to Saviano, the Camorra has murdered some 4,000 people and illegally buried enough toxic waste to create a mountain twice the height of Mt. Everest.

It’s been a while since I first saw this brutal slice of social realism in Cannes. And it left an indelible impression, if not an urgent desire to see it again. 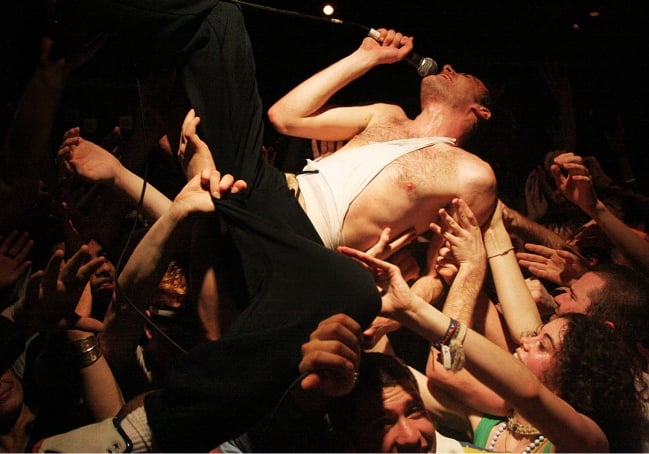 I’ve already written about this provocative Canadian documentary on two occasions, first when it premiered at the Whistler Film Festival in December, and in a recent issue of the magazine. To read the magazine piece, which includes an interview with Montreal director Brett Gaylor, go to: He’s seen the fugure and it’s a remix. And these were my first, startled impressions of the film, blogged at the Whistler festival:

One of the the most buzzed entries at the Whistler Film Festival was RiP: A Remix Manifesto. After winning the audience award at the International Documentary Festival Amsterdam (IDFA), it went on to win the Cadillac People’s Choice Award at Whistler. This Canadian documentary, directed by Montreal filmmaker and web activist Brett Gaylor, is a knockout. Rip is a dazzling frontal assault on how corporate culture is using copyright law to muzzle freedom of expression. It’s central character is a young Philadelphia mash-up artist named Girl Talk (aka Greg Gillis), who performs and records material sampled from myriad sources, and defends his right to do so without paying royalities. As far as he’s concerned, he’s just mining the pop culture that engulfs us and creating something original out of it. It’s basic collage, and as the film points out, it’s an art form that long predates digital sampling technology, going back to the Surrealist movement and the cut-ups of William Burroughs.

Walking a fine line (gangplank?) between fair usage and piracy, in his documentary Gaylor uses scads of music and film clips—from Disney cartoons to Rolling Stones hits—without permission. So RiP becomes a meta movie about defying copyright—an example of the phenomenon that it’s documenting. It sounds remarkably risky, especially considering that this is not an underground project but a movie backed by the National Film Board and the I talked to Gaylor and he asked if he was trying to turn his movie into a test case by pushing the envelope of the law. But he claims that everything he’s done is within the legal bounds of fair use. We’ll see if Disney and the Stones concur. Both can be very litigious when it comes to protecting rights to their material. A good chunk of RiP is devoted to Disney’s vindicative campaigns to prosecute anyone who dares to reproduce the likeness of Mickey Mouse. And one of it’s subjects is Dan O’Neill, cartoonist leader of the Mouse Liberation Front.

I think RiP has the potential to have the kind of runaway success of The Corporation—if Gaylor doesn’t sabotage its commercial prospects with his desire to give the movie away for free on the Internet. On the other hand, that’s part of the movie’s ethos. Gaylor wants to make the movie available for free download on opensourcecinema.org. Not only that, he’ll be posting supplementary footage and inviting downloaders to recut the movie. In other words, he wants to distribute the film as snowballing work-in-progress, a film about a movement that accelerates the movement, and gathers energy from it. A movie that won’t sit still.