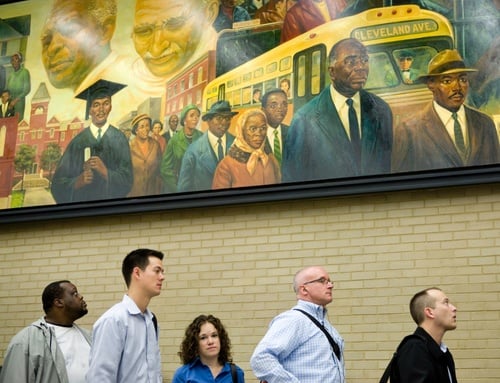 I saw this photo of voters lining up this morning at  Andrew Sullivan’s blog and realized it was not only relevant to this post, but also taken at our local polling place. (Photo: voting at Martin Luther King Jr Library in Washington DC, by Brendan Smialowski/Getty.)

Finally, Election Day is finally here! It’s been a long haul. This campaign has been going on since — well, in some ways since the Republican Convention in 2004 when Bush was up for reelection and people like Rudy Giuliani were starting to gear up for 2008. It’s hard to believe that I spent the Fourth of July with Joe Biden campaigning at a barbecue in Iowa and watching Hillary and Bill Clinton making their first joint campaign appearance at the state fairgrounds — back in July 2007 that is!

Much has been made in this campaign season about the “Bradley effect” — the phenomenon in which opinion polls overstate the support for an African American candidate because people are afraid to tell pollsters they’re not voting for the black guy for fear of looking racist. Pollsters have been arguing back and forth for the past few months about whether such an effect exists, whether it ever existed, and whether it will result in Obama underperforming what the polls predict.

But as I read various accounts of voters’ experiences at the polling places today, one think is striking. So many of them say they wanted to go vote to make sure they are “part of history.” Suppose they like the candidate and be inclined to vote for him but have other demands on their time, or they may be sitting on the fence, how much more likely are they to turn out to vote in order to be a “part of history?” I haven’t seen anyone try to quantify this. I’ve heard some African Americans put it in slightly different terms: that they wanted to be sure to vote for Obama so that they could tell their grandchildren that when they had the chance to vote for the first black president, they showed up. It’s not just frustration with the Bush years that is driving record numbers to the polls today. The sense of history is playing a role too.

I have a theory about American politics: that you can learn more about how voters interpret the candidates at a visceral level standing in the room during the Iowa caucuses and listening to people try to persuade their neighbours to vote for their candidate — than you can learn from listening to any analyst at any other point in the election. Back in 2004, I had a sense pretty early on that the somewhat obscure senator from North Carolina named John Edwards was going to make a big showing despite his lack of national security experience in an election which was largely about national security. On caucus night I stood in a firehouse in rural Iowa and heard people boil down the argument for the millionaire lawyer without a word about policy, but just an heartfelt plea: “He worked his way through law school!” It was said with passion by blue collar workers to one another at a time when Howard Dean was the big story and the union workers were expected to go for Dick Gephardt, but it was Edwards and his campaign talk of economic hardship and the “two Americas” that had touched a nerve. Edwards won the caucus I was on and became John Kerry’s running mate.

At the caucus I attended in Iowa last January, the Joe Biden supporters were making arguments to their neighbours about his foreign policy ideas; the Kucinich people were talking policy; the Hillary people talked about her health care plan and shouted “Do it for your daughters!” But what the Obama people said was qualitatively different, and it seemed to explain why there were twice as many of them as supporters of other candidates. They turned to the undecided voters and said: “Are you going to just stand there or do you want to be a PART OF SOMETHING?”

Sure, there may very will be a race-related”Bradley Effect” tonight. But I wonder whether the race-related History Effect might be even bigger.