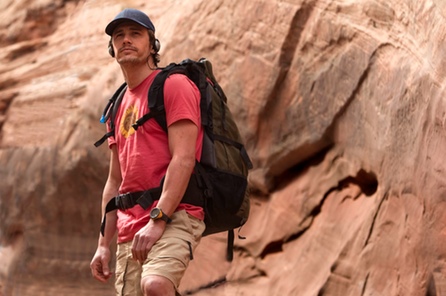 On Saturday the smooth, slick, unsinkable juggernaut of TIFF ran aground.  It happened, as luck would have it, amid the frenzy of the opening weekend. One of the festival’s most anticipated films was 127 Hours, the new feature from director Danny Boyle (Trainspotting, Slumdog Millionaire). It’s the true story of climber Aron Ralston (James Franco), who spent five harrowing days trapped by a boulder in a Utah slot canyon until he finally extricated himself by amputating his arm. I arrived half an hour early to queue up for the 2:45 pm press and industry screening, because I knew there would be a crush. Then we were told the screening was delayed. No explanation. So we waited, and waited. Finally festival co-director Cameron Bailey showed up to address the impatient mob. I thought, this must be serious. He explained there had been a technical glitch with the subtitling at TIFF’s gala venue, Roy Thompson Hall. Consequently, the audience for the public premiere of Guillaume Canet’s Little White Lies was being moved several blocks uptown from Roy Thompson to the Scotiabank multiplex—into the large cinema where we were waiting for Boyle’s film to be screened. We would have to wait for an HD projector to be installed in a different, smaller cinema. Not all of us would get in. Patience frayed and tempers rose as TIFF’s legion of professional movie-goers saw their carefully mapped-out schedule disintegrate. The festival’s opening weekend has been the most frustrating I can remember in a quarter century of attending TIFF, with too many essential movies front-loaded into the schedule and overlapping. This was the last straw.

For anyone outside the festival, this must seem absurdly trivial. There’s carnage in Pakistan and in the tunnel vision of the TIFF bubble a screwed-up screening seems like the end of the world. But it was weird. Waiting for a movie about survival became its own meta endurance test as we wondered how long we were willing to wait to watch a man cut off his own arm. As I left the line-up to investigate, I ran into Boyle, the director, and told him there were a lot of jokes flying around about waiting 127 hours for 127 Hours.

Long story short. We get in after about an hour and a half—some of us. Directors don’t usually show up at press screenings but Boyle ducks in to explain, apologize and tell us he really wasn’t trying to create a siege mentality. He also makes a joke about all the 127-hour jokes that would be forthcoming. He tells us that this screening, because of what we’ve gone through, will be like no other.  His geniality almost erases the ill feeling in the room.

The wait is worth it. The movie is played so incredibly loud my wife fishes earplugs out of her purse. It begins as a rock’n’roll assault of sound and image as a gonzo climber races into the desert, biking and hiking, headphones cranked. But as he rushes to hit road,  a shelf cam dwells on the Swiss Army knife he forgets to pack. A telling moment. The dinky little instrument he will eventually use to  perform surgery on himself is a cheap, blunt cutting tool that came with a stocking-stuffer flashlight.

127 Hours is about 90 minutes long but feels longer, in a good way. We think we’re never going to get out of that canyon, or out of that movie, alive. There have been some great adventurer-in-peril movies, notably Touching the Void and and Into the Wild. But they had more to work with. The idea of making a feature film that consists mostly of one guy being pinned by a boulder for five days is incredibly bold. But Boyle compensates with kinetic visuals and electrifying sound design to make sure things never get slow. The movie is an assault on our senses. It tries to wear us down. And Franco plummets into the role as if his life depends on. (This is an actor who always seems to be taken over by his character rather than imposing his own persona on it, and in that sense he seems ideally cast.)

127 Hours is a loud, brash, manipulative trip into deep horror—existential and physical. I had to cover my eyes for the grisly parts, which are hard core: this movie redefines “visceral.” But as much as I was aware of the midway-ride manipulation, and tried to resist it, I got pulled in. Hook, line and sinker.  By the time Ralston finally escapes, scrambling into the light on a triumphal surge of music, to my surprise I found myself fighting back tears. As if I’d been broken by the movie. I walked out emotionally exhausted. But who knows how much of my resistance to 127 Hours had been worn down by the fact that I spent about as long waiting for it as watching it.