How not to respond to criticism

Update: Something we didn’t know at the time this strip ran was that it’s about to come to an end. As noted in comments, there’s some genuine anger in that strip – the anger of a son upset at the way his father’s work was mocked – that makes its tone more understandable.

Every morning I read The Comics Curmudgeon, where Josh Fruhlinger single-handedly maintains awareness of long-running, little-read comic strips by mocking them. Usually, when a strip responds to his mockery, it does so in a good-natured way that shows that they’re in on the joke (and that they appreciate the attention). And then there’s Crock, which gets some of the toughest criticism on the site. The author of the strip took notice and responded yesterday: 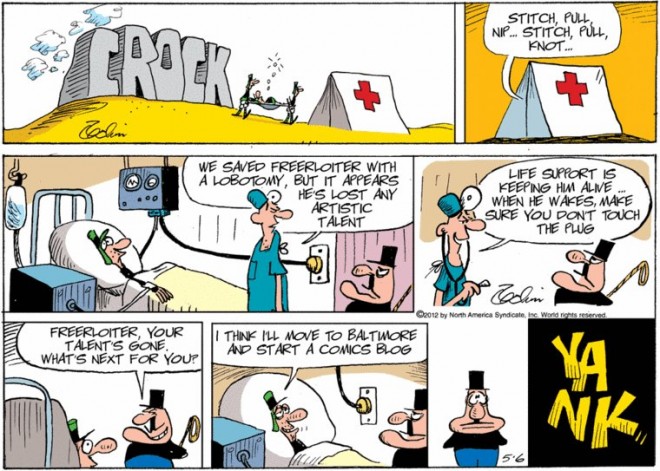 Now that’s just mean, and worse than mean, it’s ineffective – it confirms everything the blog has been saying about the strip’s lack of humour. If they’d punched back in a good-natured way, the way Jeff Keane of The Family Circus responded to the jabs from “Pearls Before Swine,” they’d wind up looking good. Instead they just look petty. Especially since the joke here – those bloggers just say mean things because they have no talent themselves – isn’t even fresh, let alone funny.