The young Olympian's success spurred interest in her sport, particularly among women 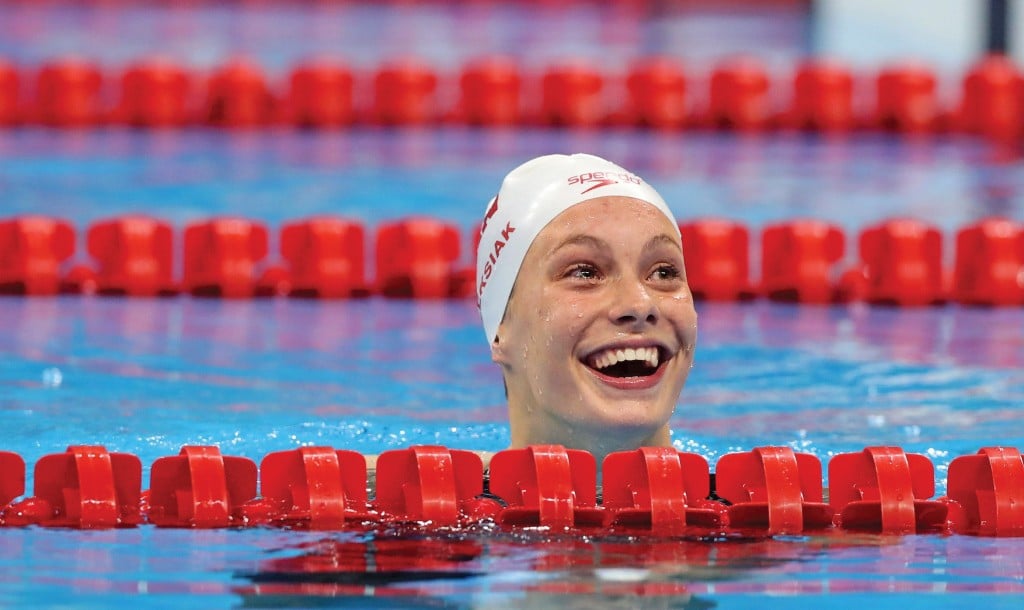 Ask a Canadian which sports they grew up watching or which sports they watch most often in 2017 and you’re likely to get the typical responses. Hockey, soccer, football, baseball, basketball, golf, tennis. You know, the mainstream sports.

However, ask a Canadian to choose just one sport they’d want their child to excel in and a surprisingly high number will answer with swimming.

We recently polled a random selection of approximately 1,500 Canadians aged 18 and older from coast to coast as part of The Canada Project and that was one of the sports-related questions asked.

Only hockey (19 per cent) and soccer (15 per cent) received more votes than swimming’s 11 per cent, which tied with baseball for third place. That’s ahead of more popular spectator sports — not to mention more potentially lucrative ones — like golf (10 per cent), basketball (eight per cent), tennis (six per cent) and gridiron football (two per cent).

Unless your child becomes a true swimming superstar, he or she is not likely to make boatloads of money in the sport. But there are a number of contributing factors as to why the sport ranked in the top three.

“Canadians inherently know that learning to swim is important,” said Chris Wilson, director of marketing, communications and events at Swimming Canada. “In general it’s one of the first things you want to enrol your kids in.”

Swimming received more votes than any other sport in Atlantic Canada and the second-most votes in British Columbia.

Among immigrants, soccer ranked first with a whopping 31 per cent but swimming was right there in second place at 12 per cent.

Perhaps the biggest reason swimming performed so well has nothing to do with the competitive side of the sport.

Having an excellent slap shot likely won’t help you in any situation outside of playing hockey. Knowing how to swim, on the other hand, might have a more profound impact.

“We joke that swimming is maybe the only sport that can save your life other than fencing or archery or something,” Wilson laughed. “That inherent knowledge that we’re surrounded by water and when Canadians have a vacation and they flood to hotel pools or lakes or rivers or beaches, everybody can relax a little more when their child knows how to swim.

“We recognize that all Canadian kids should learn to swim as a starting point and then if they love swimming we hope that they try the sport.”

Wilson said there are approximately 40,000 competitive swimmers currently in the country and roughly two million that participate in some form of swimming lessons.

Penny Oleksiak became an immediate superstar when she won one gold, one silver and two bronze medals as a 16-year-old at the Rio 2016 Summer Olympics. Even though this survey was conducted eight months after the Games — which would lead one to surmise the initial shine the sport received from the Olympics would have worn off — Oleksiak and her teammates’ achievements seemingly had a lasting effect.

“We do typically see a membership bump of close to 10 per cent after an Olympic Games and [2016] was no different,” Wilson said. “Obviously the success of our whole team and having a moment like Penny winning those four medals at the centre of it really put swimming at the forefront for Canadians.”

The success of Oleksiak — plus fellow Canadian medallists like Kylie Masse, Hilary Caldwell, Brittany MacLean and others — might have also contributed to there being a bit of a disparity between the men and women polled. Fifteen per cent of women answered swimming compared to only five per cent of men.

“From a Canadian’s perspective I think Penny sort of had that amplifying effect here because she was young and she was Canadian and she was so successful and humble at the same time and quite honestly our whole female team just rocked at the Olympics, so that really helped.”

Wilson has been in his role with Swimming Canada for the past six years and has spent 10 years overall with the organization. He spends much of his time observing the sport from the grassroots level.

He doesn’t see swimming’s momentum slowing down at any point in the near future, especially with a strong group of Olympians leading the charge.

“We felt like we had talent in the pipeline for a while and our results that we got in 2016 may have been more reflective of what we expected in 2020, so the bar’s been raised,” Wilson added. “Expectations are definitely high and we’re hoping we can produce even more success going forward to draw attention to the fact that swimming is a great sport option for those that enjoy it and are willing to put in the time.”