"Weird Al" Yankovic is back! Again. 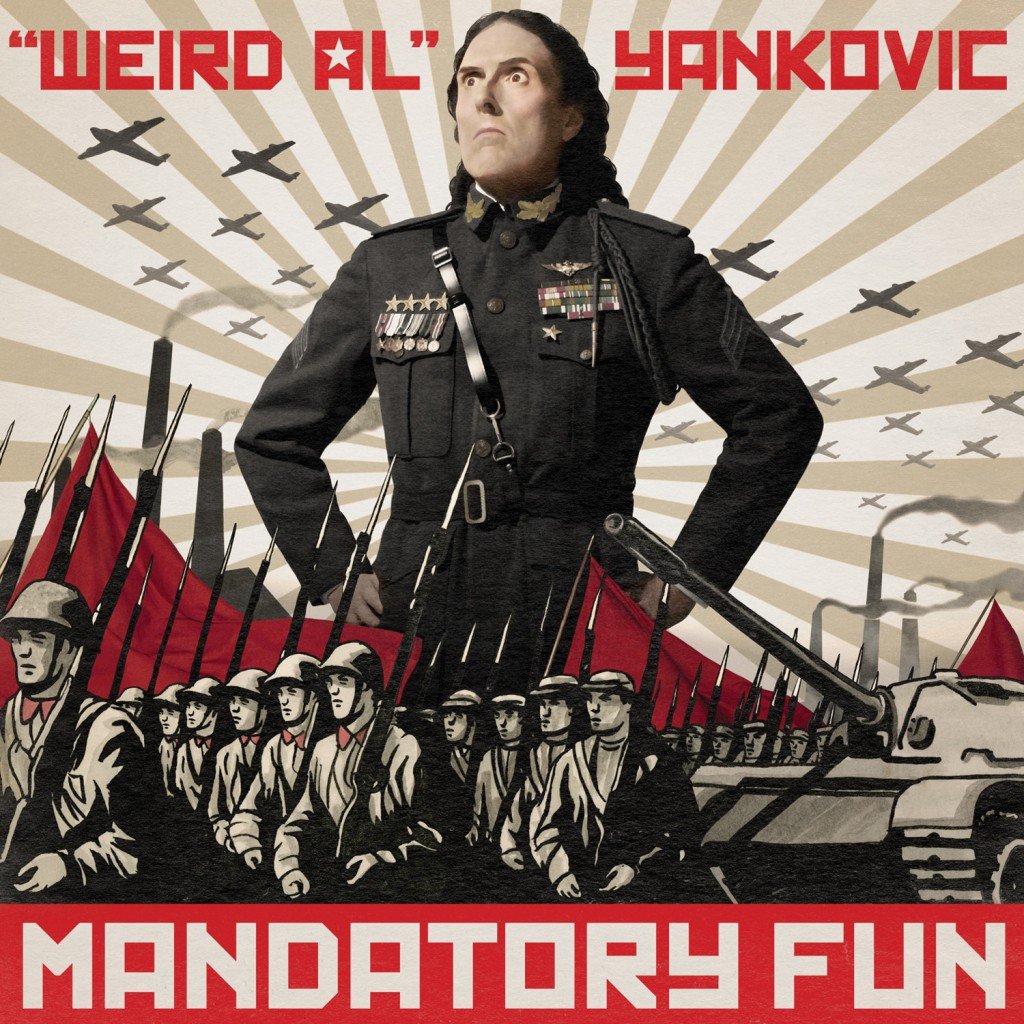 Song parodist “Weird Al” Yankovic is back! Again! This time, he’s back with a massive campaign to promote his new album, Mandatory Fun. The campaign, which lasted eight days, consisted of dropping a new video from the album every day. And it happened to hit the social media sweet spot of people who either were kids in the ’80s, or wish they had been kids in the ’80s. The videos got millions of hits and, perhaps more important, a ton of media coverage to help support sales of the album, his last on a contract with RCA.

As the linked article points out, Yankovic is constantly making comebacks. His heyday was in the 1980s and early 1990s, but, by the late 1990s, he was far enough from the glory days of I Like Rocky Road and Fat (he had a lot of song parodies about fat people) that King of the Hill‘s Hank Hill mistakenly thought he’d committed suicide when people stopped buying his records. He came back in the 2000s with his massive hit song parody White and Nerdy, and now he’s back again. He will unquestionably have another period when people don’t hear much about him, and then another hit—whether in an old-fashioned album format or something newer—that will lead to more “Weird Al is back!” articles like this one.

But what’s really unique about Yankovic is not that he’s managed to make so many comebacks, but that he’s managed to have such a long and successful career around a form that is so hard to sustain: the song parody. There are rigid and never-changing rules for the popular song parody, a comedy form that remains exactly the same, even as the music changes. The title has to rhyme with, or somehow be similar to, the title of the song it’s parodying: Blurred Lines becomes Word Crimes, Happy becomes Tacky and Iggy Azalea’s Fancy is Weird Al-ified as Handy. Having matched up the title with the song, the parody then usually doesn’t have to have much to do with the original: Although the arrangement or the accompanying video may spoof the song somewhat, the lyrics are usually really a separate, stand-alone comedy song that happens to use the tune of another hit. This is because the parodist can’t be certain everyone hearing his work has heard the original song: It has to stand on its own for someone who may have no idea what’s being parodied. Which means that the song parody form really can’t be satire per se, or, if it is, it often satirizes something other than the song it’s based on. Parodists will sometimes just drop the idea of parody altogether and include a few original songs where the music sounds vaguely like some other kind of music, but most of the songs on their albums are really just original songs with familiar tunes.

The need to create songs that refer to the originals—yet are completely separate from them—is one thing that makes it so hard to do song parodies for a living. Another, of course, is that music keeps changing, and the parodist can’t always adapt to the changes; there are some genres Al Yankovic is more suited to work in than others. You have to negotiate with the owner of the original song over rights and royalties. And many parodies, if not most, have one joke—the pun or rhyme on the original title—and stop being funny after that.

All of which means that song parodists burn out fast. The most famous and successful American song parodist before Weird Al was Allan Sherman (recently the subject of a biography, Overweight Sensation), to whom he’s often compared: They both get a lot of their laughs from the sight of a bespectacled nerd singing songs that clearly were not written to be sung by bespectacled nerds. (Sherman was Jewish and Yankovic is not, but he’s incorporated Jewish material into his songs and even topped MTV’s list of “The 10 most surprising people who aren’t Jewish.”) But Sherman was only successful for a few years, three or four at most. He became famous doing parodies of folk and pop songs that filtered them through a perspective that hadn’t been heard much in comedy before: the new suburban Jewish middle class. When he tried to expand his act into non-ethnic material and parodies of contemporary pop, he didn’t have the same success—and found that it cost so much to parody contemporary pop songs that it wasn’t even worth it when it succeeded. His audience evaporated by the mid-’60s; he was a victim of changing tastes in music and comedy, and the general wearing-off of the novelty of his act.

That’s the path most parodists follow, though they don’t usually lose their money and divorce their wives and die young, as Sherman did. But it’s not Yankovic’s path. One reason is that he’s able to keep up with pop music trends enough that he can figure out which songs are ripe for parody. As he says, he talks to his young daughter about what songs are taking off at her school. Second, he works hard to avoid the parody trap, where the song collapses as soon as you hear the title. He really tries to give his parodies a hook of their own, and a comic through-line, where they take a subject and explore its full comic potential. Word Crimes doesn’t have a whole lot to do with Blurred Lines, but is really an original comedy song about proper grammar. (Some of Sherman’s best parodies did this, too, such as his take on the ’60s pop hit What Kind of Fool Am I?; he used the title One Hippopotami and made it a song about words that sound very different in their plural versions. But he didn’t do this as consistently as Yankovic does.) Tacky is about a guy who’s tacky, and all the ways in which he’s really tacky. Low-hanging fruit, sure, but it allows the song to have other jokes besides just the title.

Furthermore, he’s developed a persona for his video and live appearances that goes beyond the songs he’s singing, and is more durable than any one parody. The shelf life of a pop parody may be short, but the Weird Al personality and hairstyle has endured for many decades.

All of this means that Yankovic has to be considered the king of this weird format: His success is much longer-lasting than Sherman’s and he didn’t lose control of his persona the way Sherman did when the latter, disastrously, tried to become a more “mainstream” entertainer. Even Weird Al’s forays into more mainstream entertainment, such as his movie UHF (one of those ’80s flops that’s now a cult classic, because what ’80s movie isn’t a cult classic now?) have been the work of someone who knows his style, his target audience, and how far he can go without losing his place as the family-friendly wacky guy. And he’ll remain the lovable wacky guy, singing crazy songs about fat people, nerds and grammar, long after most of the songs he spoofs have been forgotten.