I’ve witnessed a lot of terrifying things in my time – I’ve seen John Goodman eat spaghetti, for God’s sake – but nothing comes close to this: it’s the head of Reluctant Senator Mike Duffy staring directly at me through my computer screen and greeting me by name. 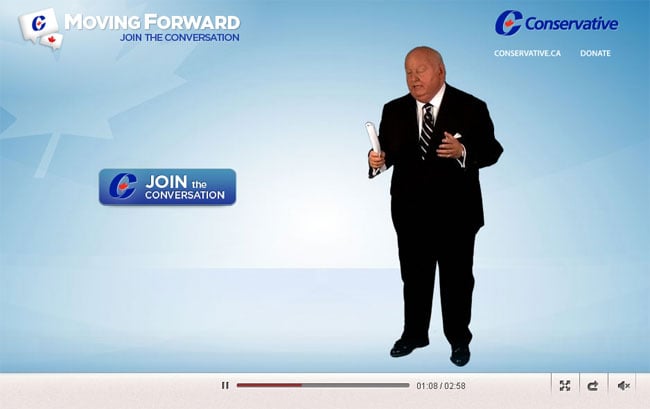 Okay, the name he actually says is “Stephen,” but that’s because this version of the new Duffy computer infomercial was personalized for blogger Stephen Taylor. Or maybe it was prepared so our Prime Minister could ease his way to sleep each night listening to the Independent Conservative senator repeatedly coo his name and itemize his positive qualities. You have a firm handshake, Stephen… you’re good with a hammer, Stephen… you look nice in green, Stephen… Either way, <shudder>…

Welcome to the future of political communication and size 54 suits that will haunt your nightmares! According to Taylor, “the automated Duffy has a whole bank of names to read from in the Conservative Party’s latest innovative fundraising and voter ID widget.” Conservatives began receiving their personalized Duffygrams last night. That’s what party members are calling them – Duffygrams. I guess that beats calling them Aiiiiieeeeeee!-mails.

RoboDuffy goes on to tout “the accomplishments of the past few years ever since Stephen Harper became our prime minister.” (In all fairness, he makes a good point here: Our country hadn’t accomplished a runaway deficit for, like, a decade and then – boom! – Harper.)

In Duffygramland, the recession has had no impact. There is no rising unemployment. There is no hardship. Instead, there is this: “I’m feeling the momentum and I’m sure you are!” And there’s this: “We’re moving forward! It’s exciting!!” Duffygramland sounds like a lovely place to live, were it not for the horrible epidemic of sycophancy.

One flaw: The Duffygram inexplicably ends without the Senator informing me that I could double my order and get twice the Conservative if I agree to pay shipping and handling.

ALSO: I know that most conservatives, and all Conservatives, have no sense of humour — but given that the Non-Partisan Non-Non-Partisan Senator was filmed in front of a green screen, shouldn’t they have opened with him standing in a forest for laugh-based reasons?