A dispatch from the Rally to Restore Sanity and/or Fear in Washington, DC 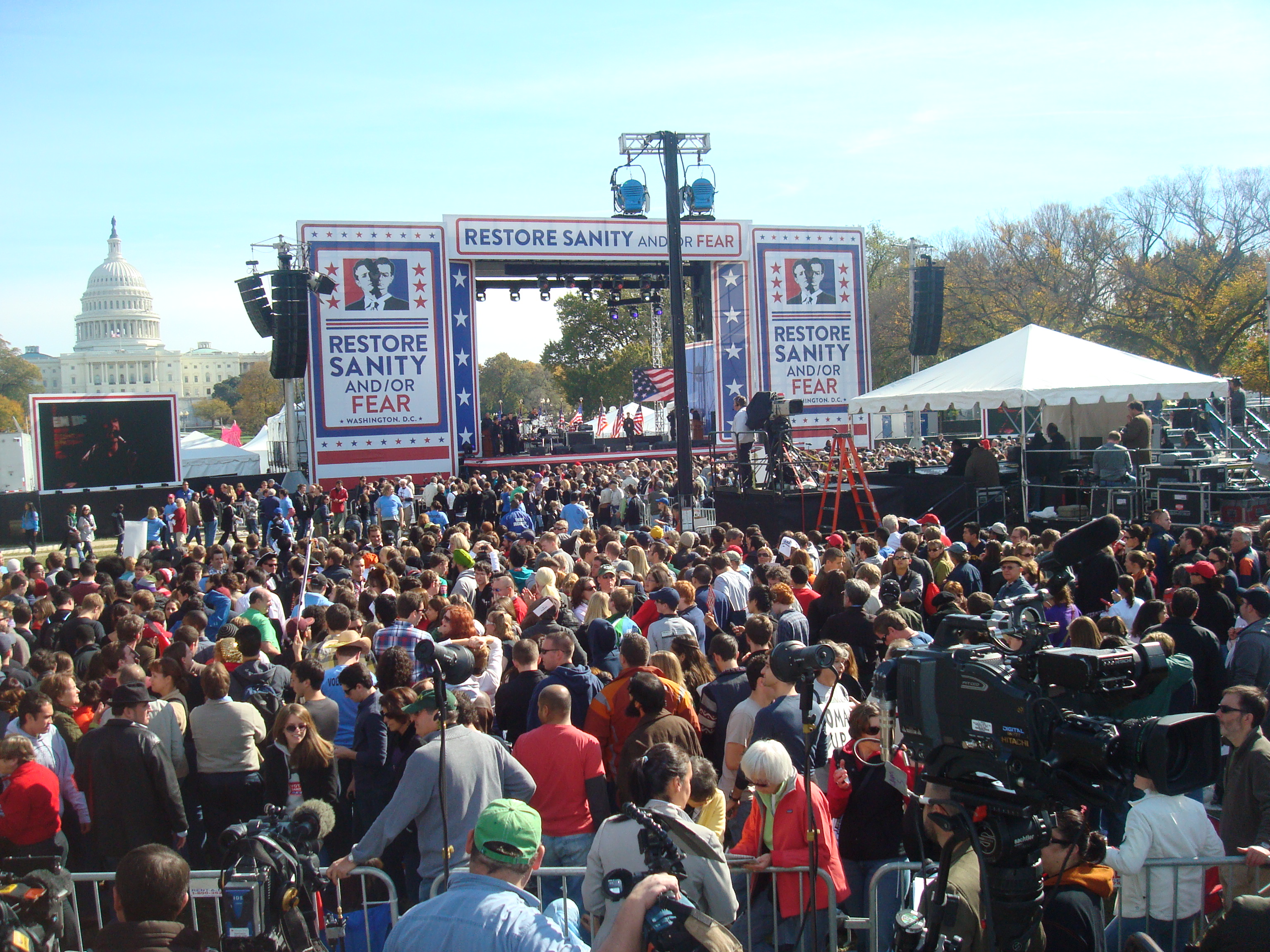 My colleague, Patricia Treble, and I were not certain what to expect of the Rally for Sanity and/or Fear. We just hoped it would be funny.

The National Parks Service, which runs the National Mall in downtown Washington, DC, where the rally was held on Saturday, had provided Comedy Central a permit for 60,000 people.  But it was clear this was going to be a much bigger event the minute we approached our suburban Virginia subway station and saw a line was forming outside of dozens of people waiting to buy tickets. On the platform of the Metro crowds jostled to get on already-packed trains. Many people had so much trouble getting on the trains, that they had traveled away from Washington to the very start of the lines in Virginia and Maryland just to get a seat – and discovered those trains were packed too.

Despite the crush, the mood was light with riders going out of their way to be pleasant and considerate – as though they were trying to prove that they really were sane. Although the Daily Show and Colbert Report attract young viewers, there was a notable scattering of grey hair and wrinkles in the crowd. Arriving at our destination, we were greeted by volunteers offering directions and a cart offering Starbucks Frappuccinos and San Pellegrino bubbly water.

On the Mall, the crowds seemed to be the biggest since Obama’s Inauguration in January 2009. [See a discussion of comparative crowd sizes here.]

Even 90 minutes before the rally, it was hard to move around. Many people had given up trying to get onto the Mall, and were camped out on side streets. We spoke to one woman who had arrived at 7 a.m. only to discover other people had snatched up prime spots four hours earlier, at 3 a.m.

“Tea parties are for little girls and their imaginary friends.”

“Big signs are for bullies”

“Don’t tread on anybody” 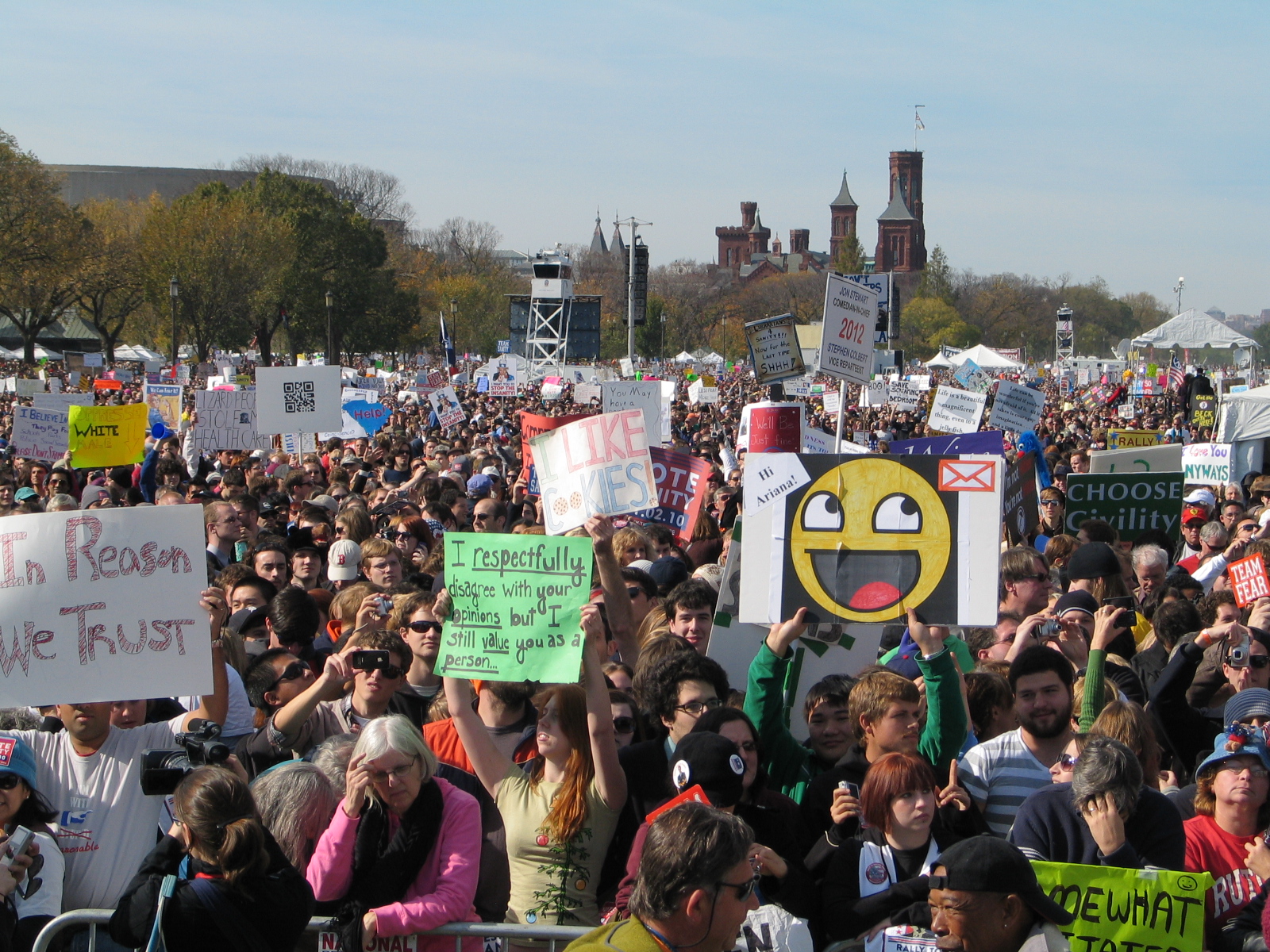 The people who came said they weren’t just there for jokes and music. They really were tired of the shouting.

“I don’t like it when you yell at me like that,” said a sign carried by Shabi Rostani, 28, who came from New York City. Her twin sister, Behar, asked politicians to “tone it down a bit.” She said she is tired of the extremes since they are “turning people against each other.”  Shabi Rostani had never been to a political rally before.  “I vote but don’t go to events like this,” she said. “They’re making an event for people who don’t go to events.”

“I might disagree with you, but I’m pretty sure neither of us is going to hell,” said Charlotte Martin’s sign. “I have to listen to them,” she said of her Republican neighbours in San Antonio, Texas. “They have to listen to me.”

“I think sanity is a good goal for American politics,” observed Tom Dowd, 48, who came from the eastern shore of Maryland and had spent 3 and a half hours battling the Metro system.

On stage it was one part satire—and one part painful earnestness. Stewart began by satirizing the trappings of modern political rallies on the Mall. There was a satirical benediction by Father Guido Sarducci, in which he went through a list of religious denominations and pleaded with God to send a sign to show which one is the “right one.”

There was also a ritual poem, read by Sam Waterston, and written by Colbert with the intent to instill “fear” in his audience, with lines such as: “You’re probably going deaf / kids back home cooking up crystal meth,” and “There was a man from Au Clair / who wouldn’t joint the panic about Hispanics / and later was killed by a bear.” But Stewart also attempted to appropriate some of the trappings. There was a decidedly non-ironic rendition of the Star Spangled Banner by a group of former servicemen called the 4Troops, and a sincere plea not to litter.

Much of the act was Stewart pleading for calm while, Colbert, after being coaxed out of his underground “cave of fear”, and rescued in a Chilean-style mining capsule, proceeded to incite terror. “You are reasonable for now. You will be a panicked mob once I release the bees.” When that was not enough to cause fear of stings or allergic reactions, he added that his killer bees were coated with peanut butter.

What came next was perhaps the most potent moment of the rally. Stewart and Colbert came out in matching stars-and-stripes sweaters – the literally wrapped-in-the-flag style that is emblematic of Republican activists and especially Tea Party sympathizers.

Colbert blasted Stewart: “I’m wearing it,” he said. “But you’re desecrating it.” Stewart shot back: “Everyone has the right to be patriotic.”

Colbert’s portrayal of right-wing commentators was so true to life that their reaction, when it came, could have been written by the comedian himself. For example, conservative activist and blogger, Andrew Breitbart, said: “It’s very motivating for conservatives to have that stereotyped group of Manhattan elitists, know-it-alls, snarky, smarmy liberals to be looking down on average Americans.”

Stewart occasionally tried to tweak liberals – especially in the media. In a musical number, he poked fun at the firings of Juan Williams by National Public Radio and of Rick Sanchez by CNN, after each made controversial comments about Muslims and Jews respectively. Later, on a serious note, Stewart said, “Not being able to distinguish between real racists and tea partiers, or real bigots and Juan Williams or Rick Sanchez, is an insult not only to those people, but to the racists themselves who have put in the exhausting effort it takes to hate. Just as the inability to distinguish terrorists from Muslims makes us less safe, not more.”

And so it was that the rally was one part satire, one part concert (acts included Kid Rock, Sheryl Crowe, T.I., Cat Stevens, Ozzy Osborne, and the Roots), and a dose of Boy Scout law. To the extent that Stewart is an influential tastemaker for at least part of the population, he was using his wit and irony to call for a decidedly un-ironic earnestness that boiled down to a version of “Why can’t we all just get along?”

But it also seemed to us that rather than mock the patriotism of the conservative activists and the Tea Party movement, Stewart was urging young liberals to not cede patriotism to the political right — effectively granting them permission to claim it and wear it un-ironically. He and Colbert sung a song about “The greatest, strongest country in the world,” which can be interpreted as mockery. But it appeared to be intended as an affirmation of the American-ness of the left – and a yearning for the right to acknowledge it.

“You can tax all my cash to help out a stranger / but I’ll sue city hall if they put up a manger,” chimed in an off-key Stewart.

And they both chorused: “There is no one more American than we.”

The rally succeeded in transcending mere sarcasm. On the one hand, it gave voice to Democrats who are tired of Republicans talking in a nasty, loud voice about their president – the way Democrats not so long ago mocked and vilified George W. Bush. But it also expressed an anxiety that there is less and less of center in American politics – that extremes on both sides are taking control and moderates and bipartisanship are punished.

In the sea of placards on the Mall, one stood out.

“It’s a sad day when our politicians are comical — and I have to take our comedians seriously.”

UPDATE: We now have a photo  gallery of the wittiest rally signs here. 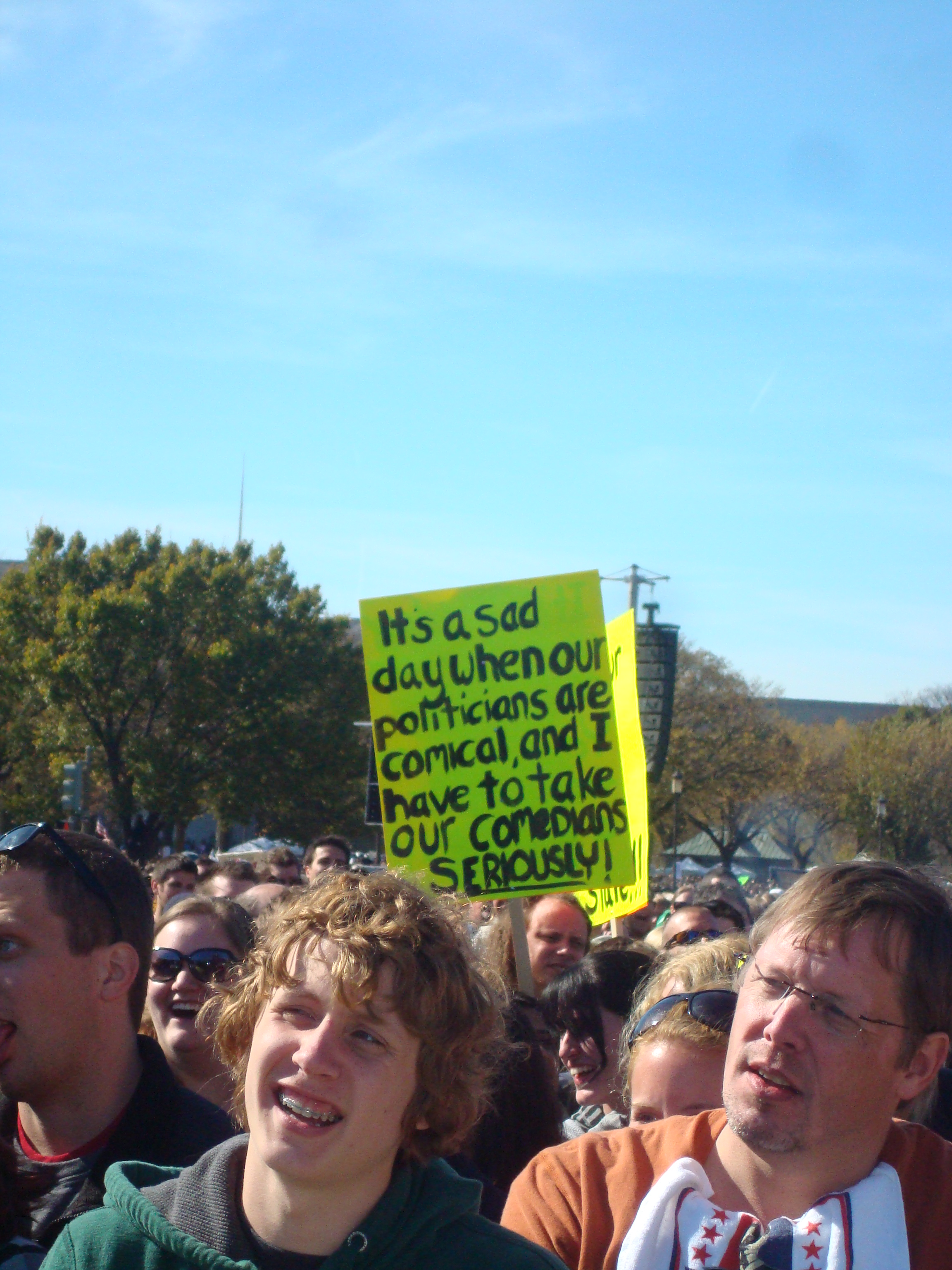