Iranian Canadian sculptor home in Vancouver after having passport confiscated

Parviz Tanavoli says that officials in Tehran took his Iranian passport when he tried to board a flight for speaking engagements in the U.K. 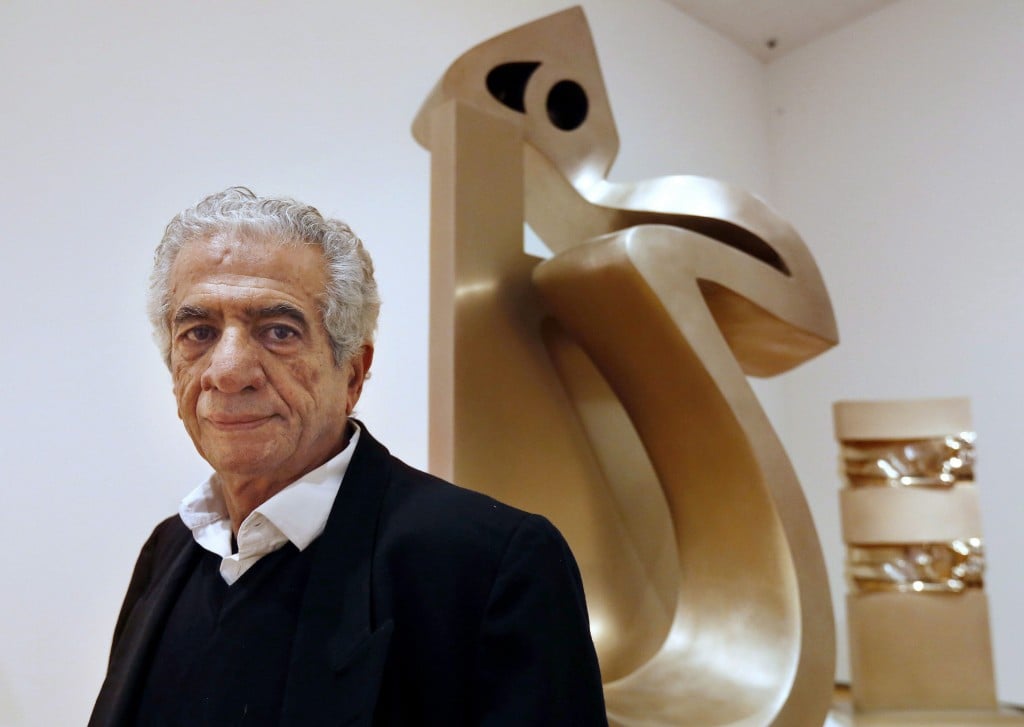 FILE – In this Feb. 9, 2015 file photo, Iranian artist Parviz Tanavoli stands near one of his sculptures called “Heech on Chair” at the Davis Museum on the campus of Wellesley College in Wellesley, Mass. Tanavoli says he has been barred from leaving the country while trying to travel to London. (AP Photo/Steven Senne, File)

VANCOUVER – A celebrated Iranian-Canadian sculptor considered one of the greatest living artists of the Middle East says he still doesn’t know what prompted Iranian authorities to confiscate his passport and bar him from leaving Iran two weeks ago.

“They never told me really,” Parviz Tanavoli said minutes after emerging from the international arrivals section of the Vancouver International Airport on Monday afternoon.

“I’ve been doing this work for 50 years. I am not a political man. I just continue doing my artwork. And this artwork, it was never, ever before questioned.”

Tanavoli said that on July 2, officials at Tehran’s Imam Khomeini International Airport took his Iranian passport when he tried to board a flight for speaking engagements at the British Museum and Asia House in London.

He posted on Facebook that he tried unsuccessfully to resolve the issue at Iran’s main passport office.

Tanavoli said last week that Iranian officials had received a complaint that his art work was “disturbing public opinion” and “spreading lies,” which he dismissed as “baseless.” But after returning to Canada he said he wasn’t sure the reason for his being detained.

After learning he wouldn’t be able to leave the country, Tanavoli returned to his work preparing for an upcoming exhibition in Iran.

He explained that his artwork is what keeps him alive.

“The minute I found out I couldn’t go … I opened my studio,” Tanavoli said. “I called me students, my helpers. We went back to the studio and began again.”

He said he would return to Iran, despite his mysterious detention.

Relieved friends and family carrying welcome balloons and flowers waved and laughed as a smiling Parviz Tanavoli wheeled his luggage cart into view at the Vancouver airport.

Bardia Tanavoli, one of Tanavoli’s three children, said his father’s arrival was especially auspicious because it was just four days short of the 1989 anniversary of the family’s immigration to Canada.

All three of Tanavoli’s adult children were at the airport on Monday to greet their father, as well as his wife, Manijeh Tanavoli.

Also on hand was Kambiz Sharif, a former student of Tanavoli’s who studied under the famed artist in Iran and now has a sculpting studio in the Vancouver area.

Tanavoli’s art has been displayed in major museums across the world, from New York’s Metropolitan Museum to the Tate Modern in London. Some pieces have fetched huge sums at auction, such as a sculpture titled The Wall (Oh, Persepolis), which sold for $2.8 million in 2008.

Another Canadian-Iranian dual citizen still detained in Iran is Montreal-based university professor Homa Hoodfar, who was indicted on unknown charges earlier this month.

The 65-year-old Concordia University professor was born in Iran but has been living in Quebec for 30 years. Her family said she travelled to Iran in February to see family and conduct academic research.