Is gun control the right conversation?

It’s not surprising that talk turns to firearm legislation in the wake of such tragedies as devastating shooting in Newtown, Connecticut. Calls for greater gun controls stem from a genuine belief and hope that improved laws will mean less gun violence. The sentiment is understandable: bettering firearm laws could prevent horrors like Newton, Aurora and Colombine, right? Well, don’t be so sure.

Despite what most people accept as truth, there appears to be no (or very little) significant relationship between the overall strength of gun legislation and firearm homicides.

Consider the chart below: You’ll notice no discernible correlation between gun laws and gun murders in the United States. I have graphed state gun murder rates (per 100,000 people) against the Brady Rankings (along the bottom). The Brady Rankings (released by the Brady Center to Prevent Gun Violence) assess the strength of state gun laws using a variety of criteria. Basically, the higher the ranking, the better the state’s gun legislation. Note: This graph charts gun murders, not all gun violence. 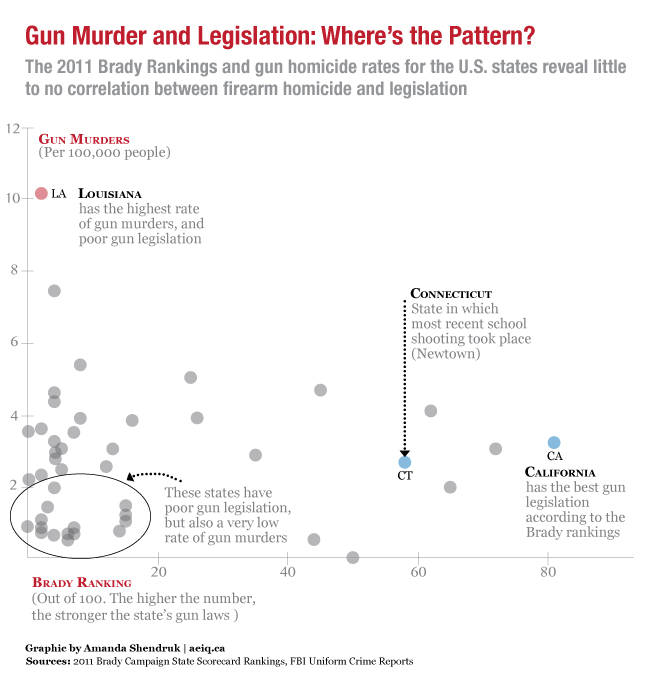 Of course, the story is never so simple, and there may be situations where firearm laws work to combat gun murders, but current firearm legislation in the U.S. does not appear to influence gun homicide rates the way we think it should.

(For some interesting reading on the topic, check out an article published in the Harvard Journal of Law & Public Policy, entitled “Would Banning Firearms Reduce Murder and Suicide? A Review of International and Some Domestic Evidence.”)

Yet, the question remains: What is required to decrease the number of firearm homicides and general gun violence in the United States? The answer isn’t straightforward; however, while legislation may not strongly influence the rate of gun murders, something else certainly does — poverty.

The graph below charts gun murder rates and the percentage of a state’s population living in poverty. Notice that as poverty rates increase, there is a corresponding increase in firearm homicide rates. (Colours correspond to whether the state voted Republican (red) or Democratic (blue) in their last national election). 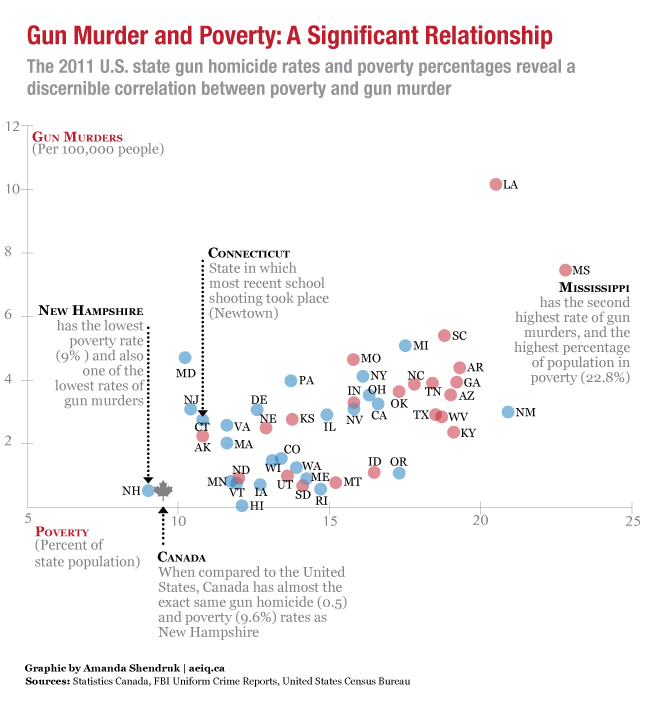