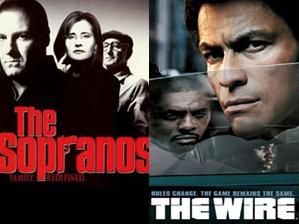 Myles McNutt is polling his readers on which show he should watch to fill a gap in his TV viewing experience. The unsurprising things about the poll are that a) Buffy/Angel is way out in front, and b) I voted for NewsRadio. What is surprising is that The Sopranos is dead last in the poll. Or maybe it shouldn’t be surprising: since the show went off the air, its reputation has not been in the best shape, or it seems that way from the many TV fans I encounter online — including big fans of the HBO approach that it helped popularize — who don’t care for it or feel it burned out early. That’s not a scientific poll of opinion or anything, but its cultural influence seems to have evaporated rather quickly.

Maybe it just seems to have experienced a particularly strong backlash after the hysterical over-praise it got in its early days. The New York Times, you may remember, called it “the most important work of American popular culture in the last quarter-century” after it had only been on TV for a year. There’s no way a show can live up to that, particularly when it goes through some rough patches, loses a key cast member early on, and ends with a gesture that only works if you are already pre-disposed to believe that the show is profound. (I am not saying that the ending of The Sopranos was a bad idea; I’m agnostic on that point. But it does assume that we trust the show and believe it has a purpose in everything it does. For a viewer who needs to be convinced that it has something substantial to say, the ending will certainly not help matters.)

Lots of things go through cycles of over-praise and under-praise, but television seems particularly vulnerable to this, because it’s not closed off: once the praise starts coming in, the creators have to keep making episodes, and the creative choices they make later can affect the reputation of the early episodes — not just by diluting their impact, but by making us evaluate the early seasons in a new and perhaps less flattering light. And despite the urge to compare TV to novels, it’s just not the same: a novel is a complete work that most of us experience in a concentrated period, while a TV show — even one with a big overall plan — is a collection of episodes, made at different times and worked on by many people. It always has creative ups and downs, and we experience the show in different ways (depending on when we watch it, what order we see the episodes in, how many episodes we’ve seen, and so on). Anything with that kind of assembly-line production aesthetic is going to have trouble sustaining a reputation for artistic brilliance, no matter how ambitious it is. One TV producer compared his job to Sisyphus pushing the boulder up the hill only to have it roll back down: you put all your effort into the job, and then you have to do the exact same thing all over again next week.

Add in the fact that TV shows begin to show their age very quickly in a technical sense — even the expensive HBO shows — and all of this makes the television “pantheon” very volatile; a show that is praised to the skies now will often spark a backlash not very many years later.  Of course this backlash can sometimes be followed by a renewed appreciation of the show’s merits, once it’s viewed in context and with more forgiveness of its mis-steps. I believe and hope that this will happen to The Sopranos eventually.

One show that doesn’t seem to have been backlash’d yet, despite praise that is sometimes as over-wrought as the early Sopranos praise, is The Wire. I’m not interested in making the backlash happen, though I sometimes think that it’s a little much to compare any TV cop show, even The Wire, to the great novels of the Western world or whatever age-old it’s being compared to this week. (I will also admit that I’m in the camp that prefers Homicide to The Wire, but despite their similarities, the two shows are different enough in approach — Homicide is a character-based show, The Wire built around plot and theme — that they’re not in competition, really. So I wouldn’t say Homicide is a better show, just more my speed.) Still, I’d normally expect the crescendo of praise to be followed by a cooling-off period, a re-evaluation, and yes, a critical and fan backlash. It hasn’t really happened.

If The Wire is backlash-proof, I think it will be because its bad luck works to its advantage. The Wire had low viewership, was ignored by the Emmys, and didn’t run particularly long. All of these things were not advantages at the time, but they meant the show never really suffered from Sopranos-style overexposure. Its canonization as Greatest Show Ever didn’t really happen until it was almost over, and didn’t take it from critical adulation to mass-media hype. And unlike Homicide, which managed to extend its run only by submitting to network re-tooling, The Wire simply had to settle for a smaller episode order for its final season (so even those who didn’t think the final season was its best couldn’t say it was truly compromised, the way late seasons often are).

I’m still thinking The Wire could suffer a backlash; the hype started late, and so the backlash could simply have been delayed by a few years. But if it doesn’t happen, David Simon can thank all the people who didn’t watch it, all the media outlets that didn’t cover it, and the network that wasn’t particularly interested in it. Another HBO example of the same phenomenon is Mr. Show, which hasn’t really suffered a backlash because it was mostly (and undeservedly) ignored by the public and the network.

FILED UNDER: Backlash The Sopranos The Wire