'It's not about image, it's about substance'

Justin Trudeau talked about connecting at the Maclean's Town Hall 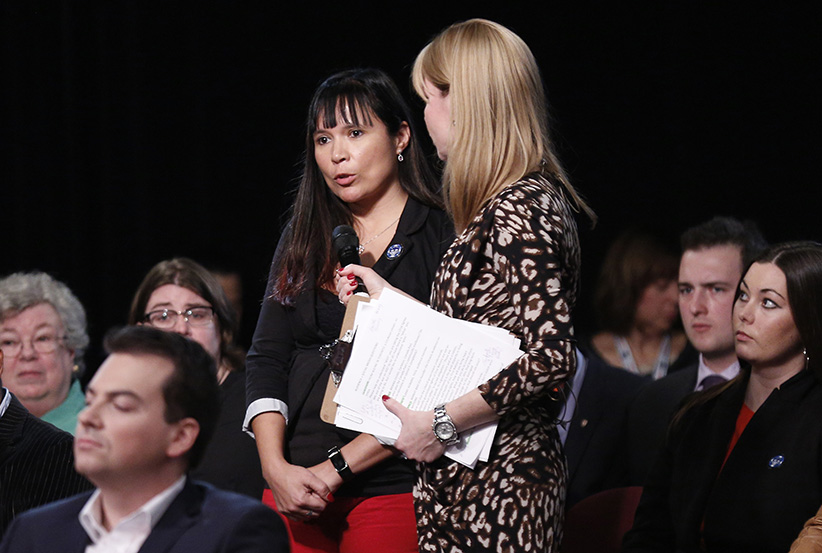 Maria Jacko, friend of NWAC and family member of MMIW, asks Justin Trudeau a question during the #MacTownHall on December 16, 2015. (Photograph by Blair Gable)

Consider just the past couple of days. On the evening before he took part in this afternoon’s Maclean’s Town Hall, Trudeau invited 20 patients from an Ottawa children’s hospital to a private screening of the new Star Wars movie. The photo of him sitting in the middle of a gang of grinning teenagers and kids in theatre seats has ruined the Christmases of countless Tory and NDP strategists who were only just beginning to recover from the Oct. 19 election result.

Earlier yesterday, Trudeau teared up at the release of the Truth and Reconciliation Commisson’s final report on Aboriginal residential schools, then brought the audience at the emotional event to its feet repeatedly with his speech. And only the day before that, social media was lit up over video of his fluid, disarmingly funny responses to a 60-second challenge of non-political questions this magazine set for him.

You’d think he might be tired of dishing up this stuff after the fall’s gruelling—well, for everybody else involved, anyway—election campaign. More importantly, you’d think Canadians might be ready for a break from his showmanship. Yet today he looked fresh. The country, at least as represented by the audience at the National Arts Centre for the town hall, seemed eager to soak it up.

Early on in the hour-long question-and-answer session, Trudeau took a fascinating stab at explaining what his persona is really all about. Asked why his “charm offensive” is the right approach for a prime minister at this moment, he took the opportunity to gently protest that the aims behind his accessible, pop-star style are worthy.

“It’s not about image, it’s about substance,” Trudeau said. “That’s what so many of my political opponents haven’t understood. If you want to serve Canadians well, with the kinds of things they want to see for themselves and for their families for the future, you have to listen to them. You have to get to know people.”

This has been a central theme of Trudeau’s for several years. It goes back to his push to broaden the base of the Liberal party when he was running for its leadership. He has faulted the party—and even his father, the late prime minister Pierre Trudeau—for failing to cultivate that link to the grassroots.

Trudeau argued today that giving himself more chances than most prime ministers to interact with ordinary people is not just smart politics—it’s a way to keep his priorities aligned with what matters to them. “You have to be engaged in real conversations and talk about their hopes and dreams for the country, and find out what’s worrying them, what’s going well, where they need a little extra help, what’s preoccupying them,” he said.

One inevitable response to his talk of fostering genuine, ongoing connections would be eye-rolling. However, that was not the mood in the room today, although those who chose to turn out for a chance to put a question to Trudeau were perhaps bound to be sympathetic.

Still, it’s not like they weren’t acutely conscious of being in the presence of a smooth operator. Judith Lewis, 60, who is about to retire from the federal public service, asked a question about civil liberties. “At times, he is aware that he is performing a little bit,” Lewis said afterwards. “But at other times, he is simply going into his thoughts and expressing them. When he answered my question, that’s exactly what he did.”

Asked if she thought she was responding more to the substance of what he said or the engaging way he said it, Lewis answered, “They are, in a way, the same thing.” Which wasn’t far off Trudeau’s point about the need to connect.

Sara Minaeian, 20, a political science student at University of Ottawa, where she is director of a political awareness group called iVote-jeVote, said Trudeau’s outgoing manner works because it doesn’t seem fake. “If that’s your style, go for it and try it out. Each prime minister is going to be different,” Minaeian said. “As a citizen, I appreciate it—it’s nice to be reached out to.”

As well, she said the new Liberal government’s earliest policy moves have begun adding the sort of substance that keeps university students, in particular, from growing cynical about Trudeau’s image. “What we talk about, what we hear about our country undertaking, like accepting the Syrian refugees, has a huge effect on students,” she said. “It’s definitely making an impact.”

If there’s little doubt that he continues to score points with a wide swath of the Canadian public, Trudeau said today that he expects his campaign style—“much more inclusive, much friendlier, much more focused on listening and engaging and solving problems, rather than creating conflict”—will work in the halls of power, too.

As an example, Trudeau alluded to his personal efforts to engage President Barack Obama in finally settling longstanding Canadian objections to American rules-of-origin labelling, which are blamed for dramatically reducing Canadian meat exports to the U.S.

“Right now Americans are feeling slightly more positively inclined toward Canada than they might have been in the past, when our foreign policy consisted of telling Americans what pipelines to approve of, or else—never explaining what ‘or else’ might mean,” Trudeau said, referring to former prime minister Stephen Harper’s attempts to pressure Obama into approving the proposed Keystone XL pipeline.

Time will tell if the way Trudeau won votes can be adapted to win over foreign governments on Canadian interests. At home, Manjit Basi, managing director of Citizens Academy, an Ottawa-based non-partisan organization involved in city issues, says it’s hard to be skeptical when Trudeau is so consistently upbeat. “We all have very strong B.S. detectors,” Basi said, after experiencing him up close for the first time at today’s town hall, “and he comes across as very real.”

Although she came away impressed, Basi did note that a few of Trudeau’s stock responses are growing a bit familiar. “I do think there is a heavy reliance around, ‘We’ll be collaborative,’ that sort of thing,” she said. “For me, let’s see what happens. I think he’s being authentic and he wants change. The question is, these things are not easy and will take time, and will the public have patience?”