Jenna Talackova: Born to be queen 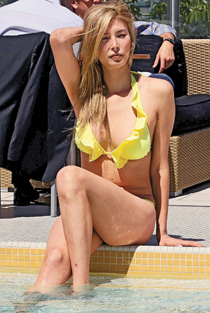 There was a time, not so long ago, when Donald Trump demanded that Barack Obama surrender his birth certificate to the world to unequivocally prove his American citizenship. Now Trump, the co-sponsor of the Miss Universe pageant along with NBC, is being prevailed upon to produce a credential of his own—call it his little apprentice—to prove his bona fides as a Mister. The woman asking to see the proof in question is Gloria Allred, the celebrity feminist lawyer representing the only transgendered contestant in this year’s Miss Universe Canada competition: 23-year-old Jenna (nee Walter) Talackova of Vancouver. Last month Talackova was removed from the competition when organizers were informed that she failed to meet the “natural born woman” criterion in the pageant rulebook.  Gloria Allred’s response was swift and simple: if Talackova had to show “hers” to qualify for the pageant, the Donald, as competition sponsor, should have to show “his” in the spirit of fair play.

Lucky for us, nobody showed anything. And Canadian law—which recognizes Talackova as an official female—melted Trump’s icy heart (the same one that has coldly quashed entrepreneurial dreams on television for the past eight years) long enough for him to re-instate the 23-year-old into the competition. The law, that is, and possibly an online petition drafted by Change.org, the social activism website which recently brought you campaigns like “Let Ernie and Bert get married on Sesame Street,” “Starbucks: stop using bugs to colour your strawberry-flavoured drinks,” and the somewhat lesser-known Canadian campaign, “Canadian government: address the Aeronautics Act, which may ban trans people from flying.”

“Miss Universe Canada, Donald Trump: reverse the unfair disqualification of Jenna Talackova!” was almost at its 45,000th signature when Talackova was allowed to re-enter the competition last week: a watershed moment for the trans community, according to activists. If she wins at the Canadian pageant next month, Talackova will accomplish another first (first transgendered Miss Universe Canada champion), and go on to represent her country on the world stage at the international Miss Universe competition in December.

Kudos to her. But can we please, for just a moment, take a more holistic look at this breed of spectacle, as it only happens every once in a while and we should savour it accordingly. It really doesn’t get much richer than when human rights activists fight for the rights of minority groups to objectify, humiliate, and degrade themselves like everybody else. Or as the Toronto Star’s editorialists put it, “could there be a more absurd place for a fight over dignity?” (In this case, a fight for the right to be undignified).  It’s only a matter of time before Change.org launches its “Let transgendered boys star in Toddlers in Tiaras” campaign. The Miss Universe Canada controversy is almost as painfully ironic as the Black Eyed Peas’ African American frontman, Will.i.am, defending his right to don blackface at the 2010 MTV Video Music Awards.

It’s also painfully dumb: The merits of Ms. Congeniality notwithstanding, pageants are vapid and superficial; their beauty is skin deep. So why should Talackova’s go any deeper? In other words, if she looks the part, what else matters? It’s called a beauty pageant for a reason. As Robyn Urback argued cannily in the National Post, Talackova looks just like her pageant counterparts—most of whom have probably had as many lip injections as she’s had hormonal ones. So a note to future Miss Universe organizers: if you can’t even tell to begin with that she was once a he, why discriminate when you learn the truth?

In the end, thanks to Canadian law—and Donald Trump’s choice to respect it—Talackova will no longer face discrimination in her fight for the right to be objectified; nor will every trans woman and child after her. And it’s very possible that her supposed handicap could transform into a legitimate advantage. After all, what’s more impressive? A beautiful bikini-clad woman, or a beautiful bikini-clad woman who used to be a man? There’s no denying that Talackova will get an A for effort where her opponents won’t even qualify. And with transphobia on its way out—however slowly that exit may occur—chances are audiences will be increasingly impressed with, rather than put off by, a beautiful transgendered contestant. Who knows? One day it might be the “naturally born” females hiring the likes of Gloria Allred and crying foul play. Stranger things have happened. So perhaps where one Miss Universe rule was discarded, another should be added: if you’re a woman now, you were always a woman—at least in the eyes of the judges. A Change.org petition signatory wrote online recently, “Her being trans represents that it was harder for her than most to get where she is today, and that makes her the perfect Miss Universe contestant.” Not so. Jenna Talackova is no more or less qualified than any of her fellow competitors. She is merely equal to them. And that is her triumph.