Jill Abramson and glass ceilings in the newsroom 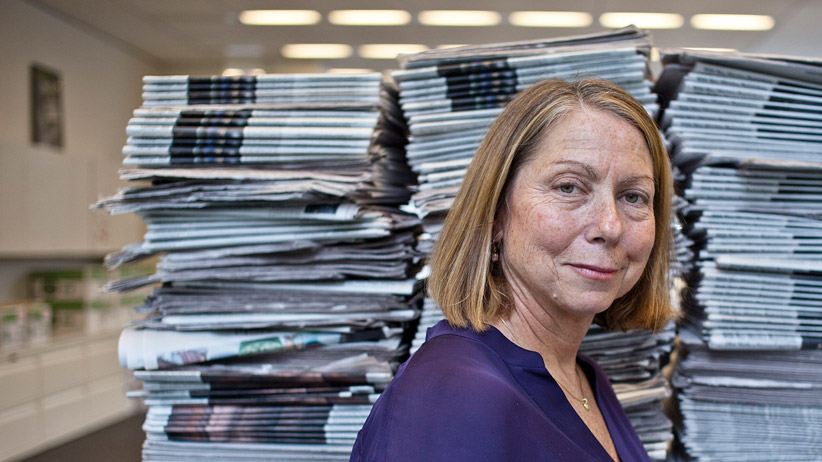 In 2011, for the first time in its mostly male existence, the New York Times promoted a woman, veteran journalist Jill Abramson, to the position of executive editor. For many female journalists in North America, Abramson’s ascent was fraught with cathartic emotion; according to a New Yorker profile written in 2011, a number of women at the Times shed tears of joy when they heard the news. It was, I imagine, like a nerdier, understated version of Barack Obama’s inauguration—that is, if Obama were a 57-year-old woman occasionally referred to by his colleagues as “brusque,” “pushy” and “bitchy.” Abramson’s news team may have proceeded to rack up four Pulitzer prizes in one year—the paper’s third-largest haul in history—but her managerial style, according to a controversial Politico piece from last April, made for a highly toxic work environment. So domineering and stubborn was Abramson, allegedly, that another high profile editor, Pulitzer prize-winning Dean Baquet, punched a hole through a wall in the Times office, after one of many heated arguments with the boss.

Last week, in a surreal display of gender metaphor, the Times made history again when publisher Arthur Sulzberger Jr. fired Abramson unceremoniously, and gave her position to Baquet. In other words, the guy who penetrated the office drywall with his bare fist replaced the pushy lady who made him do it. Baquet is African American, the first black executive editor to lead a Times newsroom, but his very own Obama moment has been dwarfed almost entirely by the gender drama above. Why, everyone seems to want to know, did Abramson get fired? Did sexism play a role? The feminist think pieces have descended with the subtlety of an avalanche.

“Women battle to break through the glass ceiling,” American columnist Frida Ghitis wrote on CNN.com last week. “After that, what comes is walking on broken glass.” Ghitis is not, I suspect, channelling Annie Lennox, but referring rather, to a state of gentle cautiousness she believes powerful women must assume in the workplace, lest they be whispered about and denounced as combative, pushy bitches—lest they be fired for having some balls.

We know that Abramson had balls. But we’ll never know if she was fired for using them; nor will we likely know if sexism played a role in the forced resignation of Le Monde editor Natalie Nougayrède in Paris last week. (Nougayrède was accused by newspaper staff of leading with “Putin-like” tendencies; hardly your typically sexist dig.) Both Abramson and Nougayrède were feared and revered women. Both were polarizing figures in their separate media empires, and both, for one reason or another, paid the price.

According to a recent story in The New Yorker, Abramson repeatedly asked her employer for a raise when she learned a number of her male predecessors had earned a higher salary. Sulzberger Jr., however, claims the pay discrepancy issue has been taken out of context; that when you factor in pension earnings and benefits, Abramson’s earnings were fair and substantial. He also stated that her sacking had nothing to do with unreasonable requests of any sort, but solely with the management of the newsroom. According to Politico, when women at the Times expressed concern that Abramson’s firing was sexist, Sulzberger Jr. “responded that as women get promoted into historically male jobs, they will also occasionally get fired from them.”

In other words, because the status quo is no longer explicitly sexist, accusations of sexism aren’t taken at face value. If Abramson had asked for a raise in 1972 and was fired shortly after, we’d know her sacking was sexist. But she asked for a raise in a newsroom that was 50 per cent female, in a world where the most recent Democrat nomination battle for the presidency was between a black man and a white woman.

It seems we’ve embarked on new terrain where workplace sexism isn’t so easily diagnosed. It’s no longer a “sweetie” here, or a slap on the backside there. Nor is it, in this case, a plainly unjust pay cut or salary disparity. It’s a he said, she said.
The truth of the matter may have less to do, anyway, with man—or woman—and more to do with machine, namely the kind (smartphones, tablets, e-readers) reshaping the news industry, and in many cases bankrupting it. According to nearly every report written about Abramson’s untimely end as executive editor of the New York Times, the former editor insisted on creating a new digital management position at the paper, an idea Sulzberger Jr. wasn’t apparently very keen on. The New York Times’s innovation report which, conveniently, was leaked last week, reveals that the paper has seen a troubling decline in its website and smartphone audience. Nougayrède, half a world away, attempted to merge Le Monde’s print and online editions, a disastrously unpopular move that her staff revolted against.

These aren’t gendered problems. They are industry problems. We have no clue—and likely never will—as to whether they were directly responsible for the termination of two very powerful women’s careers, but we do know that when powerful men lose their jobs in the same week, the questions on our minds are drastically different. In late March, the editors in chief of the Globe and Mail and the National Post—John Stackhouse and Steve Meurice—were let go a day apart for reasons more inscrutable than the ones given for Abramson and Nougayrède’s sackings. Yet our questions about their oustings weren’t sex specific, but idea specific. It was the rapidly changing times, not sexism that we attributed to their sudden dismissals. It wasn’t social injustice; it was social media.

That reasoning, however, is reversed in the case of Nougayrède and Abramson, whose downfalls are linked, not by issues plaguing newsrooms around the world, but by anatomy. What are the chances, you ask, that two powerful women are fired in the same week for no other reason than job performance? They are, in fact, pretty good in an industry uprooted by change. Equality isn’t only the ability to succeed irrespective of one’s gender; it’s the ability to fail, too.