It's not Jon Stewart 2.0. British import John Oliver is mobilizing viewers with a whole new kind of comedy 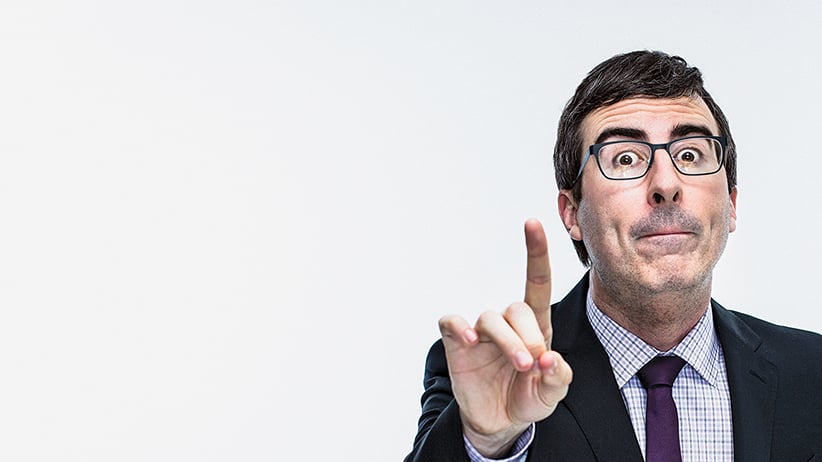 Has a clone of The Daily Show With Jon Stewart finally managed to match, or even surpass, the original? HBO’s Last Week Tonight With John Oliver is a new show and, in some ways, an unformed one: The format hasn’t been worked out beyond having the British comedian sit at a desk for a half-hour and do topical comedy pieces. But those weekly pieces have already accumulated an online audience in the millions, even when they deal with subjects such as climate change or soccer management. “We’ve seen John Oliver show-related pieces of content get very popular on Reddit,” says Victoria Taylor, director of communications for the popular aggregation site. And while using Daily Show techniques such as broad double-takes at clips of news reporters saying silly things, he’s created a style that isn’t exactly The Daily Show—and is maybe Stewart’s first real competitor in cable comedy.

That won’t be because he was the first person to try it. After Stewart turned The Daily Show into a new kind of talk show, more satirical about politics and media than any other comedy, the last decade produced dozens of rip-offs in the U.S. alone. Most are forgotten, such as The Half-Hour News Hour, D.L. Hughley Breaks the News, and The Onion News Hour. At least Oliver had more credentials as a political comedian. He’s a British comic who never achieved much success in his native country; Ellen E. Jones, TV critic for the Independent, says that even today, “John Oliver fans in Britain are either people with a particular interest in U.S. political culture or long-term fans of The Bugle,” his satirical news podcast, launched after he moved to America in 2007. He became a popular contributor to The Daily Show, but didn’t become a star until last summer, when Stewart took a few months off and Oliver filled in for him. He was so successful that New York magazine’s Vulture called him “The Daily Show’s heir apparent,” but instead, HBO gave him his own show—and the challenge of finding his own voice.

That was the essential thing, because a personal style may be the main thing standing between comedians and Daily Show-style stardom. Canadian comedian Rick Mercer, who has been one of TV’s most successful political comics with This Hour Has 22 Minutes (which predates The Daily Show) and The Rick Mercer Report, says the challenge of doing this type of comedy is that the comedian has to have his or her own perspective on politics, and not just make generic political jokes: “I think when shows fail is when it’s manufactured. You go out and get some funny people and tell them to read the newspaper and make some jokes. That won’t work. It all has to do with the personality and the perspective, because, at the end of the day, it’s commentary.” Most of Stewart’s imitators were not up to that challenge, leaving only The Colbert Report, a Daily Show spinoff that was more of a companion piece than a competitor. And even that show is ending soon, as Colbert moves to replace David Letterman in a conventional talk show.

That left the field wide open for Oliver, who certainly didn’t shy away from ambitious topics just because he was doing a new show: in one of his earliest episodes, he did a long piece about the death penalty, and followed that with a segment on Net neutrality, a subject even real news shows often find too boring to touch; viewer reaction to that one may have wound up breaking the Federal Communications Commission (FCC)’s website. His speech on the alleged corruption of soccer’s governing body, FIFA (“You are hosting the World Cup somewhere where soccer cannot physically be played,” he complained about the planned 2022 match in Qatar), became a serious part of the discussion around the issue. Throw in Salon dubbing Oliver “the media’s moral centre,” and you have a show that’s become influential out of proportion to the number of episodes it’s aired—more so than True Detective.

So, what are people getting from Last Week Tonight that they don’t get from The Daily Show four times a week? One difference may be in the pacing. Oliver has embraced the lack of commercial breaks and longer running times of HBO, allowing him to expand the time he spends on a topic. Stewart rarely does a comedy bit that lasts more than five minutes. But Oliver’s pieces on FIFA and Net neutrality both ran more than 13 minutes, time enough not only for jokes and silly graphics but in-depth explanations of the issues involved.

Stewart has always denied being anything more than a comedian. Oliver may be going in the opposite direction from him—and more in the direction of Mercer, whose trademark rants are often about “something I wish people were talking about”—by openly embracing the idea that people are getting news from his show. He’s even prepared to get the kind of fact-checking usually reserved for actual news; when the Miami Herald investigated one of his claims about FIFA, it received corroborating documents from Oliver’s staff, eventually rating the claim as “true.”

But Oliver doesn’t just explain the issues: He openly chides his audience for not caring enough about them. A recurring theme of his show is that Americans are too incurious about the lies that corporations and other organizations are selling them. On his first show, he mocked the U.S. media for not talking about India’s elections, and explained why Americans should find them interesting. In his Net neutrality piece, he urged the “monsters” who populate U.S message boards to “get out and, for once in your lives, focus your indiscriminate rage in a useful direction.”

Americans are supposed to hate being lectured by foreigners; that’s why Piers Morgan’s CNN show bombed. But people are happy to take it from Oliver. Ellen E. Jones thinks the key is that “he does what he does with a sense of humour and an awareness of cultural sensitivities—Piers Morgan, God love ’im, has neither of these things.” And, she adds, Oliver sometimes makes jokes about his own presumptuousness in telling Americans what’s wrong with them. “There’s a humility there, which you wouldn’t get with a more traditional foreign journalist who decided to hold forth on all the ills of the U.S.”

But if Last Week Tonight takes off and eclipses The Daily Show, it may be not just because of its content, but because of its ability to connect with the new Internet world of Upworthy, Buzzfeed, and other sites that find and disseminate material. Mercer is one of many viewers who first encountered Oliver this way: “Everything I’ve seen has been on the Internet, so I can’t talk with any authority about the show as a complete show. But I can talk about segments, and I love it.” The overused term “viral video” almost seems to be fresh again when applied to the way Oliver’s monologues spread online, and Taylor suggests that this is partly due to his choice of online-friendly material: Subjects such as Net neutrality are “of interest to a lot of Reddit community members.”

The network has also tried to distribute that material in a way that will maximize the amount of buzz it gets. At a time when other TV studios are hoarding their content, trying to keep it on their own sites, Oliver’s producers have made a deliberate decision to free up his routines and make them as widely accessible as possible. The day after his show airs, key segments are uploaded to the show’s official account on YouTube. Videos from that site are much more popular with bloggers and content aggregators than official website content, which is often hard to play and doesn’t work in every country.

That combination of a huge online presence and a genuine activist spirit could make Oliver’s show something we’ve never seen before: a comedy show that gets results. Stewart and Colbert, as the Guardian recently noted, are perceived as comics “who are adept at identifying problems but rarely cross over into agitation.” Oliver, who once exhorted his viewers to “seize your moment, my lovely trolls, turn on caps lock, and fly my pretties, fly, fly!” could actually use his new power to do something more about those problems.

Oliver has described his show as still a work in progress, and HBO has indicated it may change the number of times a week the show airs. But people are already sensing something new, and it’s possible that Oliver can feel it, too: When PBS host Charlie Rose asked him about the FCC website incident, Oliver said it happened because he “told them why they should be angry about it, and they went in droves.” Comedians have told Americans what’s going on in the world, but telling them why they should be angry? That’s different.