Just what Prince George wants: a stamp from Canada 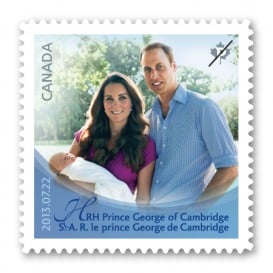 He’s going to be king of Canada one day, but right now three-month old Prince George is more focused on eating and sleeping. That doesn’t mean the pomp and ceremony has to stop. Today Canada Post unveiled a stamp to commemorate his birthday, and got good luck in its timing, since the little prince will be christened next week on Oct. 23.

The picture is one familiar to anyone who hit a newsstand or scanned the Internet: the informal family snap of George and his parents, Prince William and Kate, duchess of Cambridge, that was taken by his maternal grandfather, Michael Middleton.

“Canadian stamps continue to document moments in time and this stamp is a fitting addition to the duke and duchess of Cambridge’s family album of Canadian stamps,” said Deepak Chopra, CEO of Canada Post, in a press release. “We know that Canadians—as well as people across the world—will enjoy sharing this piece of royal history for the future king.” While it marks Prince George’s first time on a Canadian stamp, his parents have already appeared twice: In 2011, Canada Post issued two stamps featuring the couple—one for their engagement and another for their wedding.

And given those two stamps were the most popular ones for 2011, Canada Post is no doubt hoping for great things for this one of the couple and George. The stamps going on sale October 22, and are available for a limited time only.