Kate, Camilla and the Queen out for tea at Fortum & Mason

It is so rare for Queen Elizabeth II to take family with her on a public engagement that the BBC World Service broke into its newscast to go live with the coverage of the arrival of the monarch, her daughter-in-law Camilla, and her granddaughter-in-law Kate at Fortum & Mason, the exclusive London department store. They were there to unveil a plaque marking the revitalization of the area (has anyone counted how many times the Queen has whipped back the curtains on those markers in the last 60 years?), meet servicemen involved in sending gifts to troops overseas, and have tea with the store’s staff and owners, the British branch of the Weston family. 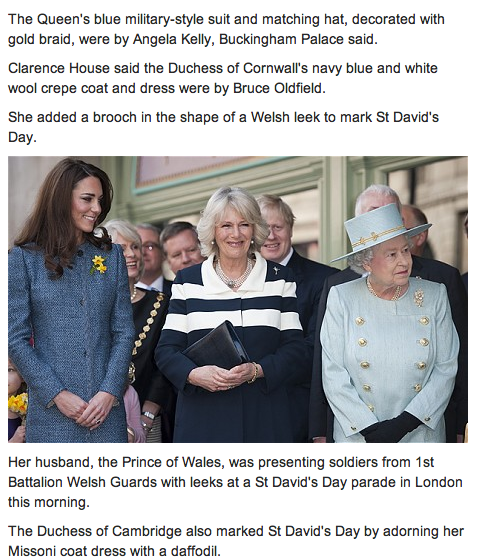 1. How comfortable the three women were with each other. They were laughing as they rummaged through their gifts, large F&M gift hampers stuffed with delicacies and–more importantly for all three canine lovers–dog treats. Given the history—and scandal—that seems to never be far from the Windsor clan, it’s almost a miracle they get along. After all Camilla helped break down the marriage of Charles and Diana, Kate is married to Diana’s son and wears her engagement ring, while the Queen didn’t attend Camilla and Charles’s civil marriage. (Elizabeth II is head of the Church of England and Camilla is a divorcée.)

2. The evolution of royal style. The picture from the Telegraph (above) says it all. Not only is each generation nearly a head taller than the previous one but their styling gets simpler and more relaxed, something that really stands out given they all wore shades of blue. While the Queen wears a hat, gloves and purse along with her usual jewellry of a triple strand of pearls and a diamond brooch, Camilla wears a large pearl necklace and a slightly more stylish outfit (by Bruce Oldfield), but has skipped the headwear and gloves. Her handbag is a more relaxed clutch. And then there’s Kate. The newest Windsor is the plainest. She’s wearing a simple Italian coat dress with no jewellry and doesn’t appear to be have brought a handbag at all. Maybe she doesn’t like wearing a lot of jewellry, maybe she’s just not confortable wearing historic pieces, or maybe her jewellry box isn’t that full—after all, she hasn’t even passed the one year mark as a Windsor.

Or there might be another, simpler explanation: Kate doesn’t want to to be accused of upstaging the Queen. After all, that was something Diana did all too often.