Your utterly valueless Kentucky Derby tip of the morning

A race report from Colby Cosh (who knows nothing about racing) 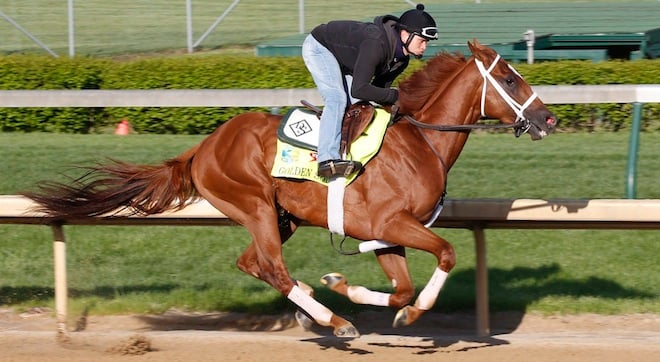 Happy Kentucky Derby Day! Post time for the 139th edition of the Super Bowl For The Super-Wealthy is 6:24 p.m. Eastern time this afternoon, and the big Canadian angle this year is the equine duo owned by the diamond king of the Northwest Territories, Edmonton-born Charles Fipke. Fipke’s Golden Soul was 31-to-1 to win in late Friday betting; Golden Soul backed into qualifying for the Derby field only after a few horses higher in the points system got hurt, and his only win so far has been a “maiden” race against other first-timers. So the one to watch might be Fipke’s other entry, Java’s War.

Like Golden Soul, Java’s War is said to have a pedigree that predicts a propensity for turf tracks, and the results of his two-year-old season reflected that. But Java’s War, who stood at 22-to-1 in Derby betting late Friday, earned an impressive calling card April 13 by winning the Blue Grass Stakes, a traditional Derby warm-up held on synthetic dirt. (Synthetic dirt is pretty much the same chemically as real dirt, but with a certain industrial uniformity that supposedly makes it a very different experience for your proverbially touchy thoroughbred.) Java’s War won in a way that may bode well for the mile-and-a-quarter race distance that he, and everyhorse else in the field, will be competing at for the first time. In the old-school phrasing of NYT racing reporter Tom Pedulla,

…it can be difficult to find him at all as other horses bolt from the gate. He is not one to hurry. His way is to hesitate when the gate snaps open, spot the rest of the field many lengths, and gradually pick them off when it is time to grow serious.

I know nothing about racing, but I like the sound of that! Since 1945, just nine out of 67 Blue Grass Stakes winners have gone on to win the Kentucky Derby, but 24 of them, including 2012 winner Dullahan, have ended up in the top three. And while we’re playing the CanCon game, CBC News has another Canadian angle, more tenuous and certainly a bit more dismal, that involves stronger 5-1 contender Goldencents.