Despite a recent remodeling, Edmonton's Stanley A. Milner Library has problems

Pardon me while I clear some bile on a strictly local topic. An elected official of the City of Edmonton stood up today to declare us a “City of Learners”. There is no record of anyone pointing out that such a thing, if it actually meant more than opportunistic civic wankery, would involve having a big central library that people could visit safely. You could even argue that this condition is essential to possessing any respectability at all as a “city”, let alone one peopled by “learners”.

The Stanley A. Milner Library’s problems aren’t something that most tourists or visitors will encounter directly; they’re experienced solely by the people who live here and get around on foot or by city bus. And they do not admit of any easy solution. The recent violence in the area surrounding the front of the library is merely the exposed tip of an iceberg of asociality and unpleasantness: mooching, arguments, low-grade physical scuffles, public intoxication. It’s a complex interaction of several phenomena. 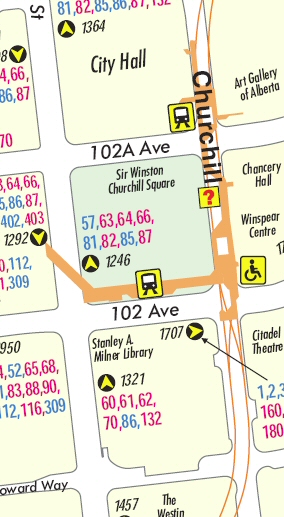 Just for starters, it seems to be, in part, an outcome of security measures designed to make the inside of the library safer. It’s a reliable general rule that you can leave books lying around anywhere without having them stolen—though this rule is suspended in the case of unattended textbooks on a college or university campus—but libraries are still attractive to a certain genus of social nuisance: homeless internet users, cranky pseudo-scholars, public masturbators, street-corner eschatologists, avid readers with what we’ll call “underground businesses” that they can manage from a cell phone.

The EPL takes an extremely broad and tolerant view of its social mandate, and is reluctant to ban or eject disruptive patrons for anything short of common assault. It counts engagement with the poorest and craziest as a success, and takes less notice of the middle class (which, after all, has its own district branches). But “incidents” inside the Milner have plummeted in number recently, and as far as I can tell it’s partly because staff and hired heavies are more aggressively rousting out the bathroom crackheads, napping bums, and ranters.

These flakes are being disgorged onto the street facing Sir Winston Churchill Square—lately transformed, with the support of current mayor Stephen Mandel, from a green space into a concrete festival venue. It handles that function nicely, seven or eight weeks every summer. The rest of the time it’s a drug mall for truant punks and a theme park for transient Indian youth. And the front of the library, kitty-corner from an LRT station, is essentially a poor man’s transit hub for the entire downtown between 97 and 109 Streets—an issue intensified by the recent closure of 102A Ave, another Mandelian “redevelopment” move that merged the Square with the City Hall block for pedestrians but forced westbound bus traffic to move nearer the library entrance. If you were looking for a proximate cause for intensifying conflict and boorishness at the foot of an edifice dedicated to liberalism, reason, and peace, this is surely the obvious choice. Mandel provided a perfect metaphor of his approach to government when he was asked how the Milner’s problems could be solved and he suggested that it switch the main entrance—like the Square, recently remodelled at enormous expense—to what is now the south-facing rear of the building. He apparently saw no irony in asking the library to turn its face away, as if in shame, from his own cement calamity. Mandel, who is up for re-election in October, has wild, Kubitschek-esque plans to reshape Edmonton’s entire downtown. He’s done a heckuva job with just a couple of blocks; imagine what Mr. Unintended Consequences could accomplish if he’s really let off the leash.