It’s 2 am, and too late to be typing. It was a full evening, beginning with the awards and ending with a windblown party at the Majestic Beach, with one last screening squeezed in between. The Cannes jury, chaired by Sean Penn, awarded the top prize, the Palme d’Or, to one of the last films they saw: Entre les murs (The Class) by French director Laurent Cantet. I’d heard nothing but raves about, and wouldn’t you know, it was one of the only films among the 22 competition entries that I had not seen. (I’d missed the screening in order to see Atom Egoyan accept his award from the Ecumenical Jury for Adoration.) Fortunately, I could catch a repeat screening immediately after the awards ceremony. It’s a wonderful film, and fully deserving of the Palme. You can also understand why why the jury gave it unanimous support—it’s one of the few very good films in competition the everyone seemed to like. Bold without being controversial, offensive, or especially demanding, it’s not the kind of picture to polarize an audience, or a jury—unlike Che. 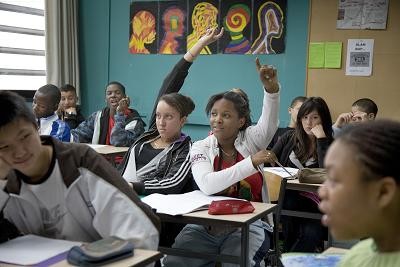 Set almost entirely in a single classroom, The Class follows the conflicts between a French high school teacher and his students over the course of an academic year. We’ve seen movies built on teacher-class dynamics before—To Sir With Love, Dangerous Minds and Dead Poets Society, to name a few. But The Class is in a class of its own—one of those films we’ve never seen before. The cast is composed entirely of non-professional actors, including the star, former high-school teacher François Begaudeau, who wrote script and the memoir on which it is based. The entire cast was recruited from a single school. The director worked with them for an entire school year. The result is a seamless drama with the realism and spontaneity of a documentary. It builds narrative tension without the usual plot contrivances that have a teacher channeling student unrest into transcendent creativity.

It’s a character drama played out a war between insolence vs. authority, a relentless sparring match between a sympathetic teacher and his multi-cultural mix of unruly but charming pupils. The morality is remarkably even-handed. The teacher’s disciplinary provocations can be as reprehensible as the students’ intransigence. It’s like watching a dialogue between French rationalism and the rest of the world, although I’m not sure the French would see it that way.

The Class exemplifies a bold new current of documentary-style drama that rely on improvised shooting and non-professional actors, while affording a street-level view of social conflict. Walter Salles’ Linha de Passa, shot guerilla-style in the heart of San Paulo, is another example—the jury recognized it by awarding Sandra Corvelino Best Actress, although she’s actually one of the few professionals in the cast.

The jury also recognized Che, the most talked-about film in Cannes, by awarding Benicio Del Toro Best Actor. Can’t quarrel with that, even if Soderbergh’s clinical camera work kept the performance at arms length, with barely the luxury of a close up. Turkish auteur Nuri Bilge Ceylan won Best Director for Three Monkeys, which was certainly the most immaculately composed film of the competition. It’s about a chauffeur who takes a rap for a corrupt politician, who then cuckolds him. Sean Penn has made it clear he dislikes politicians. And his jury took every chance to award films that vilified them, including Il Divo, a ghoulish portrait of Guilio Andreotti, who ruled seven governments as Italy’s prime minister.

The production values of the Cannes awards ceremony tend to be as amateurish and improvised as a high-school graduation ceremony, rife with awkward moments. One of the worst came when Sean Penn proclaimed a special jury prize to recognize two outstanding talents with a lifetime of achievement behind them: Clint Eastwood and Catherine Deneuve. Asking two legends of that stature to share a token prize seemed insulting. It was such a transparent ploy to pay homage to a couple of friends in film that failed to get prizes that Deneuve couldn’t help rolling her eyes as she dragged herself onto stage. Clint had already gone home.

As I walked back to the hotel from the closing night soiree on beach—where the African wind was whipping sand into our eyes—workmen were already dismantling the beachfront decor of the festival, like stagehands striking a set. I watched a front-end loader lift concrete-potted trees onto a flatbed truck, while techno music still throbbed from the party at the end of the Croisette. The circus was leaving town.

Here’s the complete list of prizes, with links to the films. . . bonne nuit.