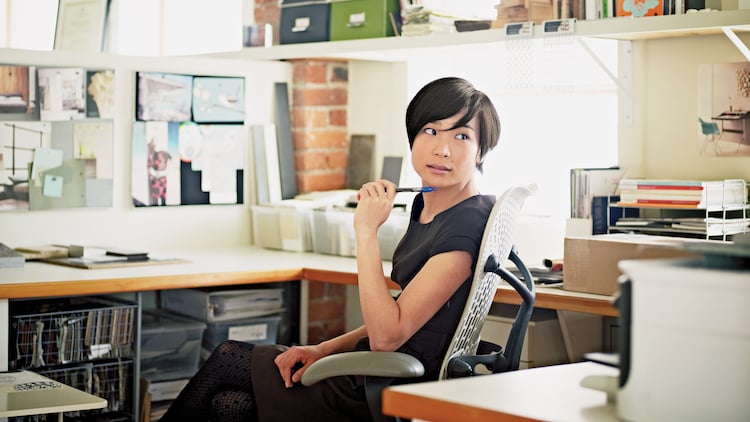 In the world of stock photography, an orange looks like an orange, an airplane looks like an airplane, and a man looks like a man. A working woman, on the other hand, is more likely to appear as a gross caricature of herself: a scantily clad secretary, a preternaturally happy supermodel in business attire, or a giantess capable of shattering a glass ceiling with her bare hands.

Type “women and success” into the search bar of Photobucket, a popular stock photo website, and you will see a picture of a woman in a short skirt bending over to pick up an oversized purse filled with cash. In fact, search “women” and “leadership” on any stock photo website and you will invariably get more of the same: gigantic women in power suits crushing miniature men with stilettos, women in power suits scaling cliffs, and women made in the image of the Hindu goddess Vishnu, their numerous thrashing limbs reaching and failing to grasp office supplies, diapers and casseroles. (This is supposed to denote “multi-tasking” in the modern age.)

In the last few years, Internet feminists have responded to the absurdity of sexist stock photos with a series of hilarious and satirical memes and blogs. A photo gallery on New York magazine’s website, called “Feminism, according to stock photography,” mocks the fact that a quick search of “feminism” on a stock photo site will turn up hundreds of images of women in pantsuits climbing ladders or wielding power tools. Another, on The Hairpin, called “Women laughing alone with salad” even made it onto the Ellen DeGeneres show. Shelbie Vermette, the photo editor of The Grid, a Toronto alt-weekly, says that over-the-top sexist stock photos are a “running joke” in her workplace; she sifts through them all the time, cringing, and emails the “most offensive and ridiculous images” to her colleagues. Finding a decent photo of a working woman can be impossible: “Oftentimes, if I’m not happy with what’s out there, we’ll figure out something else,” she says. “If we’re doing something on a female nurse, we’d rather show a picture of a nurse’s hat than a woman in a nurse uniform with her boobs to her chin.”

As depressing as the stock photo landscape can be, Vermette is hopeful it will soon change, thanks to a new photo collection developed by Facebook COO Sheryl Sandberg and Getty Images. This month, Sandberg announced that her organization, Lean In, partnered with Getty—one of America’s most well-known stock photo companies—to produce the Lean In collection: a series of stock images “devoted to the powerful depiction of women, girls, and the people who support them.” In place of the stereotypes and sheer weirdness central to typical stock photo collections, the Lean In collection features ordinary women and girls doing ordinary things. Businesswomen, for example, don’t scale mountains; they lead meetings. “Not everybody is stick thin in the collection, and not everybody is young,” says Jessica Bennett, a former Newsweek editor who works with Sandberg at Lean In and helped develop the project. The collection features both blue- and white-collar working women of all shapes and sizes. Not only is it void of sexy secretaries and man-eating megawomen, it’s rife with sensitive New Age dads pushing strollers and helping kids with science experiments. “We wanted to include men as equal partners in families,” says Bennett. Pam Grossman, the director of digital trends at Getty Images, believes stock photos have the power to change societal perceptions. “The more people who are comfortable with images of women in leadership positions,” she says, “the more comfortable they’ll be with that in their actual lives.”

Not everyone is so gung-ho. Camille Paglia believes Sheryl Sandberg is “a master propagandist who habitually and shrewdly fuses dated feminist rhetoric with projects that mysteriously redound to her commercial benefit.” Sandberg—and Getty—do stand to gain immensely from their timely, politically correct, feminist photo collection. But then, so do we.

Stock photography seems innocuous because it’s impersonal and generic. But there’s great power in the generic.