Why gender politics don’t belong in the playpen 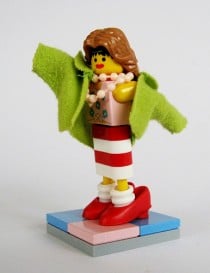 A number of so-called “feminist” and “health” groups are speaking out against Lego for launching an allegedly sexist line of building blocks and action figures specifically designed for girls. Said groups believe that the new pink and pastel-y Lego line gives young girls the impression that “being pretty is more important than who you are or what you can do.” But Lego says it created the line after getting requests from female customers (“moms and girls”) to make toys with brighter colours and domestic themes: i.e. girls want to play house, not just build one.

And why shouldn’t they be able to? If boys/tomboys can build Lego spaceships, why can’t girly girls build Lego doll houses? Besides, marketing a new line to girly girls won’t dissuade tomboys from using traditional Lego anyway. I know this because I was a tomboy, and seeing girl toys on TV didn’t shame me into discarding my action figures; it just made me happy that I had a Transformer that could contort itself instead of a baby doll that could pee on its leg. Advertising may work wonders on kids, but it doesn’t make them want things they don’t like. Even McDonald’s couldn’t market a kid-friendly salad. Lego’s foray into feminized toys is good thing, because it will encourage girls to build pink palaces rather than buy them preassembled. Gender politics don’t belong in the playroom for the most basic of reasons: kids don’t care about politics. They care about playing—and all playing is role playing. Why can’t a little girl be an astronaut one day and a happy homemaker the next? Isn’t that what play is for, the uninhibited ability to inhabit different identities?

The compulsion of feminist groups and new age parents to pull back the pink and blue lining on kid culture is undoubtedly a noble one. But if they really want to make the world a better place for kids, they should stop promoting gender-neutral toys, and hammer home the message that the gender of your toy doesn’t have to match your own.