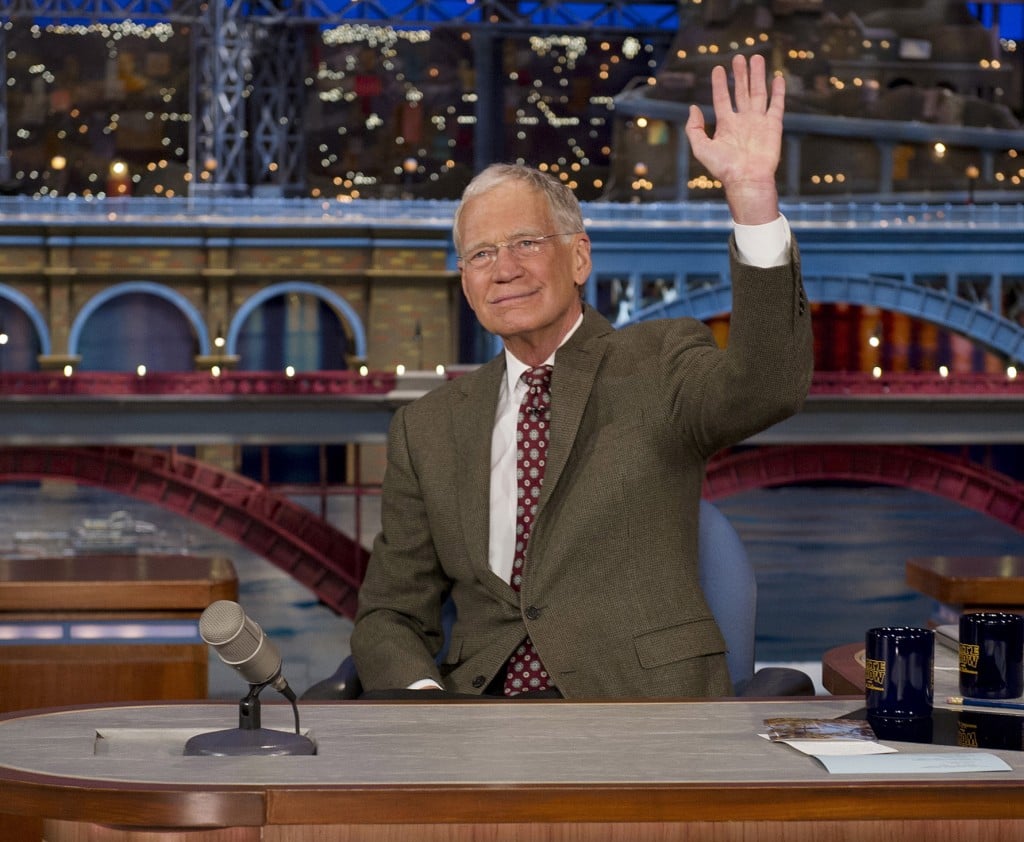 I promised yesterday that I would be back with some speculation about who might replace David Letterman when he retires in 2015. There is a slight problem with this: I don’t know any more than you do who’s a likely candidate to replace Letterman. I’ve heard the rumours, same as you; for example, the rumour that Stephen Colbert might be next in line to take over (which would make sense if he wants to branch out from his Colbert Report persona and do something more mainstream). Or the story that Craig Ferguson’s deal specifies that he be first choice to replace Letterman unless the network pays him a lot of extra money to buy out his contract. But apart from the near-certainty that CBS will be looking at a lot of middle-aged white guys, I don’t have a lot of ideas about who they might be looking at.

It seems likely that CBS head Les Moonves will be thinking about installing someone younger, who appeals to a younger demographic than Letterman. Letterman’s age was not a major problem when he was up against fellow Baby Boomer Leno, and it wasn’t a problem when he was up against Conan O’Brien: Letterman got all the older viewers O’Brien drove away. But now CBS has two competitors, Fallon and Kimmel, who manage to attract the young without totally alienating the old the way O’Brien did. That means to compete, CBS will need to find someone who can also pull young viewers and compete for the shrinking slice of that particular pie. From that point of view, it would make sense to hire a woman – just in a cold business sense, a female host might actually get some viewers who won’t watch Kimmel or Fallon. But as I said, the likelihood of anyone but a white guy hosting one of these shows is not very high.

What I can do a little more, since it involves the past rather than the future, is try to explain why Letterman is such a big deal. If you watched him on CBS for the last 22 years, and you probably have seen at least a bit of his show at some point, you may not quite understand why every late night host is paying such fulsome tribute to him and his influence on their work. Yes, “Late Show With David Letterman” was generally better than “The Tonight Show With Jay Leno,” even if its ratings were lower. But that was mainly because of Letterman’s cranky lack of interest in what he was doing, his prickly personality, his occasional willingness to be confrontational or personal when you least expected it. As a comedy show, “Late Show” was rarely particularly forward-looking or special, though. And Letterman, who slowed down his workload as he got older (including taping his Friday show on Monday, despite the havoc that wreaked on the monologue, so he could have a three-day weekend), often seemed to be phoning it in. If you are my age or younger – that is, too young to have watched Letterman in the ’80s – you may not understand why he was so important.

And you still may not fully understand it from watching clips of his NBC show. I’ve watched them, and I’ll link to a couple of them here, but no matter how many clips I watch, I won’t have the experience of watching Letterman’s show every night in the ’80s, at a time when there weren’t a lot of ways to get unusual or alternative comedy. This was one of the things that made his show such a bombshell in the ’80s: much like MTV, his show brought a new way of looking at the world into the lives of young people in the suburbs, or small towns, or college towns. Home video was only just starting to take off when he began his late-night show in 1982; the internet wasn’t around. Much of the comedy that influenced Letterman, like the TV work of Ernie Kovacs, was not available for most people to see. So the type of comedy he was doing was incredibly new to many people; it opened up a new world.

The same went for the obscure and weird references the show casually tossed out. The prevailing idea on TV, then as now, was that you had to keep your references as mainstream and broad as possible, or else explain the references for the people who might not get them. Letterman and his writers did not do that. They referenced every strange thing they could think of, and didn’t explain them in advance, leaving viewers either puzzled about what they saw (but enjoying the silliness), interested in researching the reference, or just feeling in the know because they understood the joke.

So when Letterman regular Chris Elliott appeared in the early ’90s, doing his parody of William Shatner’s “Rocket Man,” the original video was not very well known. (No YouTube, remember.) Letterman didn’t say “this is Chris’s parody of an old Shatner video.” He just introduced this thing without explanation, not caring that most of the audience would be confused. The willingness to risk confusing a large part of the audience, while throwing things in for a minority of viewers, was something you had almost never seen on network television before Letterman. But after Letterman, you’d see it everywhere in mainstream comedy: for example, the many in-jokes and cultural references on The Simpsons or Seinfeld or even Tiny Toon Adventures.

And there you have one of the things that’s most important about Letterman’s NBC show: everybody ripped it off. Everybody. Any U.S. comedy you or I watched in the late ’80s or the ’90s was in some way influenced by Letterman, or drew from other things that were influenced by Letterman. The knowing, ironic attitude to popular culture, the eclectic references, the increased use of parody and surrealism and sudden surprise gags, the delight in strangeness for its own sake: Letterman and Merrill Markoe and the rest didn’t invent this stuff all by themselves, but they distilled it into a style, made it available for everyone to watch, and then watched as it became the mainstream of American comedy. I may not have been watching Letterman in the ’80s, but I later found out that much of the stuff I loved was heavily under Letterman’s influence: for example, I recently re-read the comic strip Bloom County, which has many Letterman references and stylistic points of similarity with what Letterman was doing.

It was the Letterman attitude that became famous, that sense that he was making fun of the medium of television and the ancient, creaking talk-show format in particular. He appealed to people who had been marinated in popular culture and knew all its conventions, and were eager to see them mocked – not as traditional sketches, send-ups of TV shows (everyone already did that), but as sly, ironic commentary that might not even be instantly recognizable as parody to everyone watching. He was, many people said, not so much doing a talk show as a sitcom about a guy hosting a talk show. The Colbert Report is unthinkable without that precedent, but so is a lot of comedy that both celebrated the history of popular culture while also mocking it mercilessly. And that’s the attitude that’s most common in comedy, post-Letterman, the exact opposite of the chummy, we-love-show-biz attitude that was more common in earlier years.

And of course, as many have already pointed out, this is why Letterman “won” the so-called Late Night Wars even though Leno always beat him out for jobs and ratings. Leno’s influence has been minimal. Almost every late night show of note is Letterman-influenced in some way, whether it’s a host like Conan O’Brien who was literally Letterman’s successor, or someone like Jon Stewart who has adapted elements of Letterman (the deadpan field pieces, the host as straight man to a bizarre cast of recurring characters) to more political ends. Much like Ernie Kovacs’ influence dwarfs that of many comedians who had many more viewers, Letterman’s impact goes way beyond ratings, and continues to reverberate with people who may not even remember his best work at all.