It’s 10 p.m. and time to travel back to the days when Allan Sherman ruled the pop charts and Italian movies were popular. I refer, of course, to the third season premiere of Mad Men. While this isn’t exactly a full-fledged live-blog, I’ll write down some thoughts if they occur to me while watching. 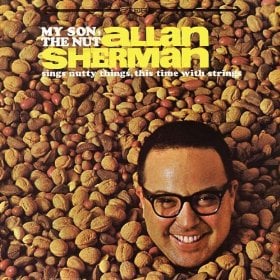 – The credits. Why don’t network shows try putting all the credits into the main title? I used to think it was time limitations, but Mad Men only takes 30 seconds for the main title and still fits all the credits in, sparing us the indignity of seeing “supervising producer” credits plastered over the action. I guess it helps that they have a small staff. (One of the things that made me feel affectionate toward My Name Is Earl is that they tried putting all the credits at the end, leaving only the writing and directing credit to be superimposed over the action. But the network made them give that up toward the end of the run.)

– It’s been said that the way the secretarial-pool scenes are shot — low-angle shots so that you can see the ceilings — is supposed to give a physical dimension to the “glass ceiling” metaphor, but it also feels like a vague visual throwback to some old movies, where the director made a special effort to get the ceiling in the frame (to make it clear to the audience that they had in fact bothered to construct a ceiling). It gives a slight retro-ness to the look, along with the slightly old-school use of colour, with Joan’s red dress and other such fashion choices standing out in bold relief from the rest of the scene.

– Because of my inclinations, one of the things I like best about Mad Men is the old-school editing and camerawork, with most scenes shot from relatively few angles and simple ones at that.

– This has been, except for Don’s imagi-flashback at the beginning, a surprisingly light and funny episode so far. (Not that there haven’t been serious issues raised and stuff, just that overall most of it has played as comedy.) I guess that means heavy stuff coming in the second half.

– Minor thing that nobody else cares about, but given that Mad Men doesn’t have fade-ins or fade-outs before/after commercial breaks, they should eliminate the blackouts on the DVD and just have the episodes without interruptions (which is clearly the way they are made: Weiner cuts the episodes and then figures out a place to put commercial breaks).

– The farcical conclusion to Sal and Don’s hotel escapades might be the funniest part of the episode so far, mostly because of Sal’s facial expressions. Actually, Sal and Don are a generally great comedy team.

– A real gift to an actor is what I might call the “anticipated question” scene — the kind every show does sometime, where one character acts like he’s going to bring up something embarrassing or harmful, and then changes the subject (while making it clear what the conversation almost was about). It’s great for actors because it has built-in subtext for them both to play. Which is to say that it’s  a common scene, but it usually works, and is a great alternative to an on-the-nose discussion. (This is a subject that Don and Sal probably wouldn’t talk about openly anyway.)

– AMC is using commercial time to plug its upcoming broacast of Rudy. It’s as if they want to reming us that most of their programming is nearly worthless.

– Betty hasn’t had much to do in this episode so far, but that will change later this season.

– I have never been terribly fond of the music of Mad Men, I mean the musical score. The scoring in this episode just seemed to scream “The Past, This Is Remembering The Past” without any particular relevance to the characters or the setting (though I realize that Weiner wants the music to go against period, rather than be part of it).

– A show like Mad Men, where the episodes often don’t have a strong individual identity or structure of their own — because the serialized, multi-plot aspect inevitably turns the episode into a series of vaguely-linked scenes — will often try to give some structure to the episode by thematically linking the first and last scenes of the show.  Which is pretty much what happened this week.

– Every time I see Vincent Kartheiser and Robert Morse in the same scene I expect at least one of them to start in with this. Pete will sing it someday, and Cooper did sing it in the past.