Welcome to the Mailbag, where I’ve been trying to catch up on all the big news that transpired during my time away. The Liberal Express. The census controversy. The use of the Static Kill procedure to seal up once and for all those toxic emissions coming from John Baird’s noise hole. Also, apparently the sun has exploded. So there’s that.

The following questions were actually submitted by actual readers. And remember: there are no stupid questions, unless you’re asking whether I’ll ever again be able to wear Crocs without thinking of Brett Favre’s penis. (Warning: link contains very salty language and extreme hilariousness.)

I read an editorial in the Toronto Sun proposing that, given their vast presence throughout Canada, Tim Hortons outlets be used as polling stations in the next election. I’m worried closet, elitist tea drinkers like myself will be intimidated by all those lumberjacket wearing, Bubba-mug swilling hockey dads and be afraid to vote. – danby

But let me ask you a question: Why stop at using Tim Hortons outlets as polling stations? Let’s just go ahead and convert the House of Commons into a franchise. It would save our political leaders the trouble of having to travel to a donut shop each and every time they need to flimsily reassert their average-folk cred. 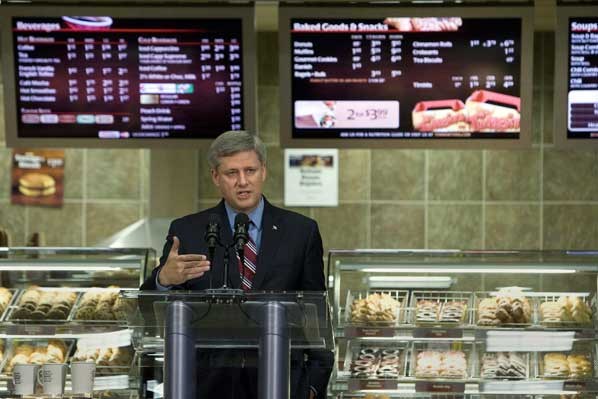 My fellow Canadians: Look upon me. I am standing in the very place where you purchase your morning coffee. Ergo, I am just like you. We share the same values, the same dreams, the same curiosity about who actually buys the old-fashioned plains. Those things taste like ass. PAY NO ATTENTION AS I NOW DEPART THIS COMMON MAN’S EATERY IN AN ELABORATE MOTORCADE AND RETURN HOME TO MY MANSION FOR A GOURMET LUNCH CRAFTED BY MY PERSONAL CHEF! (P.S. Remember: Just like you!)

Plus, turning the Commons into a Tim’s would help level the political playing field. Right now, Stephen Harper seems far more comfortable in the coffee shop environment given that a Tim Hortons has been the site of roughly 98% of his public appearances, 96% of his policy announcements and 100% of his cruller-binge regret.

Others, however, are still struggling to get the hang of it:

Note how he carries the boxes as though they’re filled with smallpox.

“The scorching heatwave in early July caused road accidents to soar because male drivers were distracted by womens’ skimpy outfits, according to insurance claim figures. The latest statistics show that 29 per cent of men admitted being distracted by short skirts and low-cut tops in the Summer weather, leading to record numbers of accidents on the roads.” – Daily Telegraph, July 30

My question is: the 71% UK males who claim they are not distracted by female beauty, are they liars or gay? – bergkamp

Nutballs! Harper only just scrapped the mandatory long form, and already we’re falling behind. How are we as a country supposed to know how we rank versus the Brits in critical data measures such as national short-skirtedness and car-crash-to-cleavage ratios? This is why the census needs to include mandatory surveys, enforced responses and many, many high-resolution photographs.

Only by compiling, reviewing and printing full-colour wall calendars from this kind of data can we hope to thrive in an increasingly competitive world of female objectification and horndoggery.

I have a friend who wants to start participating in on-line discussions, but can’t decide on a good pseudonym to use. Any advice on that front?

Tell your friend to try the pseudonym “Sean.” I’ve used that one for, like, months now and no one has yet figured out my real identity.

Scarier than both was the quote the Liberal leader gave during a Liberal Express stop south of Quebec City, where he insisted he is not a “cold man” and then added: “I am, as my wife could tell you, a man with sometimes too much passion.” I’m pretty sure he was trying to tell us he’s wild in the sack. Gross.

Fact is, I’m still a little worried about Michael Ignatieff. The Liberal Express was a good idea, and the tour seems to be going pretty well all in all. But just about every time I read a story about his appearance in some town or other, there’s at least one line from his speech that stands out as pretty… Ignatieffy.

1. “We are the progressive, reforming centre of Canada. I can’t emphasize how much we are in the centre.”

But let me try. We are in the very, VERY centre. The exact, precise, mathematical centre. Here, let me show you with this pair of compasses. DEAD CENTRE. Accordingly, there are not only political forces to the left of us and to the right of us, as even a simple layman would deduce, but also ABOVE and BELOW us. Three dimensions, okay? And it’s entirely possible that the Green party is, depending on which way you’re facing, on a DIAGONAL from where we are. THAT is how much we are in the centre, people.

2. “You know you smell the whiff of sulfur coming off the guy (Harper) — we know how right wing these guys really are.”

No need to guess at Ignatieff’s summer beach reading – he’s obviously pretty deep into the runaway bestseller Achieving Mainstream Political Success by Paraphrasing Hugo Chavez. Listen, I understand that it’s difficult to know where the rhetorical line is in politics anymore. There’s so much name-calling and hyperbole. But my sense is we’re not yet in a place where you’ll get much traction from an assertion that the Prime Minister of Canada is, literally speaking, the physical manifestation of the Devil. At the very least, hold off until Harper grows a goatee or tries to collect Justin Bieber’s soul.

3. “That’s the future of this country — it’s out there and we have to seize it with both hands,” he said.

Apparently, it is now the official policy of the Liberal party that we must come together as Canadians and give the future a reach-around.

I’ve heard the PMO won’t let helena back in the party because Dimitri is jealous of all the attention she gets? True? – MostlyCivil

I’m confused about the Guergis thing. So she didn’t totally lose it at the Charlottetown airport? She didn’t shriek theatrically at the screening officers and she didn’t hurl her boots at them in anger and she didn’t lock her lips onto theirs and suck out their souls, leaving them hollow husks of humanity destined to wander limbo for all eternity? This is very disappointing. Next thing you know, they’ll be telling us the hookers were merely well-endowed, and not full-on busty.

But here’s what I don’t get: if Guergis didn’t wig out in Charlottetown, why didn’t she come out the moment the story broke to deny these specific allegations and demand that the Canadian Air Transport Security Authority make public — or, at minimum, show to selected reporters — the video recording of her trip through security? Isn’t that just common sense? Don’t get me wrong: I appreciate the fact that Guergis declined to swiftly correct the record. My company is going to make a mint on our contract to outfit each and every CATSA officer in stiletto-proof foam. Still… perplexing.

I’ve been inundated with advertising for a new movie, the name of which escapes me, which features such tough guys as Mickey Rourke, Bruce Willis, Jet Li, Steve Austin, Dolph Lundgren and a bunch of other really, really mean looking dudes.

My question – where’s Andrew Coyne on these posters? Did his agent hold out? What gives? – Richard

You raise a good point. On its surface, The Expendables totally looks like an Andrew Coyne vehicle. The explosions. The physical violence. The climactic scene in which Sylvester Stallone dissects the inherent constitutionality of the villain’s plot to subjugate minority rights in the context of broader societal prosperity.

But understand something, Richard: Andrew Coyne is plenty tough – but he’s a certain kind of tough. He’s the guy you want on your side in a very specific kind of fight.