Hugh McFadyen retired as Manitoba Conservative leader last night shortly after the results of the province’s election came in. If Twitter is any indication, this decision was met with some surprise and dismay, even among uncommitted voters. Apparently an older, slower pace of political perception, a pace at which a two-time loser is considered to still be abundant with promise, prevails in Manitoba.

I’m not being sarcastic. Far from it: I laugh right along with Colleague Wells when I see Canadian political parties treat leaders as cheap interchangeable parts and are surprised at the outcome that usually transpires. But it is hard for me to question McFadyen’s judgment in quitting when I look at the quality of his campaigns, and consider that he has now been beaten by two different New Democrats.

In retrospect, he may be considered to have done well against Gary Doer, who (along with Danny Williams) probably provides the most substantial proof in recent Canadian politics that a premier can leave office with his personality cult not only intact but stronger than ever. But McFadyen couldn’t make much headway against Greg Selinger—who is not exactly Elvis charisma-wise—despite unrehabilitated Manitoba fiscal arrangements and the province’s wheel-spinning “have-not” status. I can’t help chalking this up to ineptitude when I see items like this fragment from an ad in Saturday’s Winnipeg Free Press: 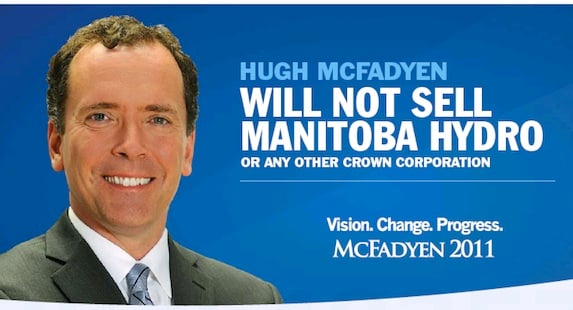 Len Gibbons could tell you that it’s already too late by the time you’re running advertisements like this. McFadyen tried to outbid the NDP on every policy front, and pushed the proposed date of a return to surplus back to 2018, a number which for economic-forecasting purposes might as well start with a “3”. This led to a campaign in which even observers strictly forbidden from free-range editorializing had to chuckle at the similarity between the cascade-o’-goodies platforms. Selinger and McFadyen, improvising on the fly, fought insanely casuistic battles over exactly how many new nurses and cops to hire and which criminals should wear ankle bracelets.

So why wouldn’t Manitobans have voted NDP? Hell, when they say they won’t sell Manitoba Hydro, you know they mean it. If it comes down to a choice between privatizing utilities and mortgaging the organs of Wawanesa schoolchildren to the Sultan of Brunei, we all know which one they’ll choose. Little Tyler better not get too attached to that spleen.

McFadyen and his campaign chairman Don Plett, in appearing at their headquarters to concede, griped about the justice of an electoral system that saw the NDP edge the Conservatives in vote share by just 46% to 44% but take almost twice the seats. Plett actually said “In any election, if you win 44% [of the vote], you should be in government.” Even, one is tempted to ask, if the other guy ends up with 46%?

It happens quite a lot in Canadian provincial politics that an outright popular-vote winner remains in Opposition. Anomalies of this sort can happen because of inappropriately high variations in individual voting power between ridings, or because the offended party has achieved a less efficient vote and run up high electoral majorities in fewer ridings. McFadyen’s problem was the latter. Manitoba’s electoral-boundaries commission of 2008 did an amazing job of keeping most of the ridings the same size [PDF]: two large northern ones (Flin Flon and Kewatinook) have estimated populations between 15,000 and 16,000, and the rest all lie within a very tight range between 18,945 (Thompson) and 21,245 (Riding Mountain). It would be hard to find a province that honoured the spirit of one-man-one-vote more punctiliously. (Certainly these arrangements look like a miracle of integrity if you’re living in Alberta [PDF], where voters in Edson and Hinton can have 52% more influence than fellow-citizens in Spruce Grove and St. Albert and nobody bats an eye or shoots anybody.)

So McFadyen just had an inefficient vote that was concentrated in the ag belt, as a quick check confirms. His candidates piled up 74% of the vote in Morris and 86% in Morden-Winkler, while prospective stars like ex-Winnipeg councilor Gord Steeves and speedskater Susan Auch fell short against NDP incumbents. McFadyen’s high-profile challengers did more or less the same thing last time; it is getting hard to see where the blame could lie, if not at the threshold of the leader’s office.

But Selinger should note that when vote shares and seats get too far out of whack, it’s a sign of dangerous instability. The premier cannot afford to have large parts of his province become no-go areas for him. Regions whose voting power is ignored precisely because of their intense unanimity can create an awful lot of drama—can literally “make a scene”, like an irascible girlfriend—between elections. Whoever succeeds McFadyen will start with that 44% of the vote locked up, and will find it easier to go up than down.