MAP: Via Rail collisions and derailments since 1991

What can go wrong when roads intersect with railways 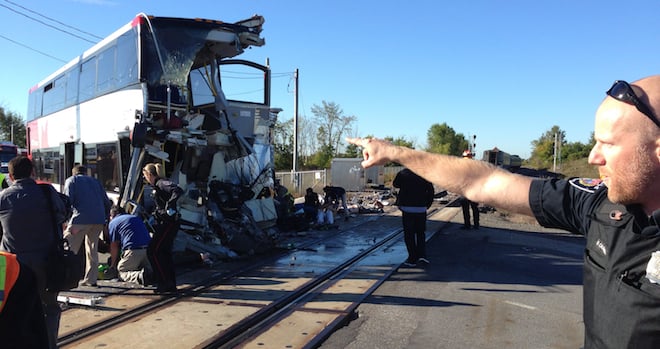 When a city bus and a Via train collided in Ottawa yesterday, killing the bus’s driver and five passengers behind him, the scene served as a stark reminder of the potential for danger when roads and railways intersect.

The suburban intersection in south Ottawa was labelled a “severe public safety issue” over a decade ago by former mayor Bob Chiarelli, reports the Ottawa Citizen, and various failed efforts to make the crossing safer eventually produced a $10-million project in 2004 to place signals at the crossing. No matter the merits of those improvements, the Transportation Safety Board of Canada is launching an investigation into the fatal collision. The agency’s spent plenty of time over the past 20 years investigating Via-related incidents.

Maclean’s counts 46 reports into incidents involving Via trains since 1991—as far back as the agency’s online database reaches. During that period of time, the TSB archive lists 289 total rail-related investigations, and a further 16 active investigations. Not every accident produces an investigation, though. The TSB counts 519 Via-related accidents since 2003, including 193 crossing accidents. And the TSB reports that every year since 2003 has seen more than 1,000 accidents on Canadian railways.

Twenty years of Via incidents dot the country, though many crowd the hectic Quebec City-Windsor corridor. Our interactive map explains where and when the incidents occurred, and how many people died or were injured. We also provide a link to the TSB’s final reports. A red marker means the collision involved fatalities. An asterisk (*) means the location is approximate. Click on the markers for the data.