michael jackson is trying not to draw attention to himself by going out in the middle of the day in PJs (worst. recluse. ever.)

Michael Jackson seems frailer of health than ever – and his sense of style ain’t exactly in fine fettle, either.

Jackson – long ago deposed as King of Pop, but still recognized by most governments as Mayor of Crazytown and the Seventh Earl of Caucasian – was spotted recently being wheeled into a Las Vegas bookstore in pajamas, a doctor’s mask and a very garish trucker hat. For a second there I thought Ashton Kutcher had joined the cast of ER. 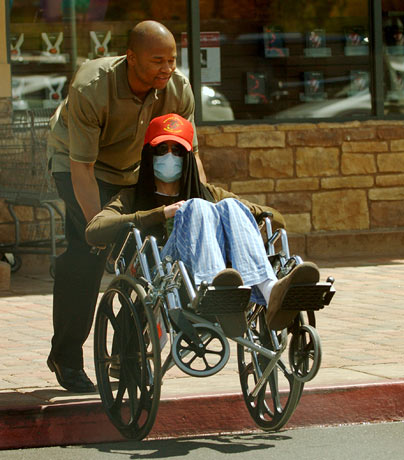 Witnesses report of Jackson that, “The skin on his hands was peeling like a snake.” They seemed alarmed, but this condition is nothing to be concerned about – his skin peeling is just nature’s way of telling him that he’s undergoing the transformation from young, child-fondling pervert to dirty old man. Next symptom: the chronically open bathrobe.

Even amid evidence of iffy health, there continues to be speculation that Jackson will attempt to revive his career by launching a big Las Vegas show of his own, following in the dainty, stiletto-heeled footsteps of Celine Dion, Cher and Elton John.

The Wall Street Journal reported a while back that private equity firm Colony Capital LLC had stepped in to give Jackson some financial breathing room, temporarily reducing the likelihood that his Neverland Ranch will face foreclosure. But Colony is going to want something for its efforts – and, whaddaya know, it just so happens to own the Las Vegas Hilton.

A Vegas residency could happen for Jackson. After all, his presence would fit into the city’s existing marketing efforts, in that decaying fragments of Jackson’s nose would at all times stay in Vegas. And it wasn’t that long ago that the singer was drawing up plans for a 50-foot robotic version of himself, capable of shooting lasers from its eyes, to be built outside any hotel where he’d perform. (Frankly, it was nice to see Jackson growing humble with age: there was a time when he would have insisted on a 100-foot robotic version of himself, minimum, to be built entirely by chimpanzees who shot laser from their eyes.)

FILED UNDER: ivory and ivory