Michael Moore hits one out of the park

'Capitalism: A Love Story' takes dead aim at the sordid romance between Wall St. and Washington 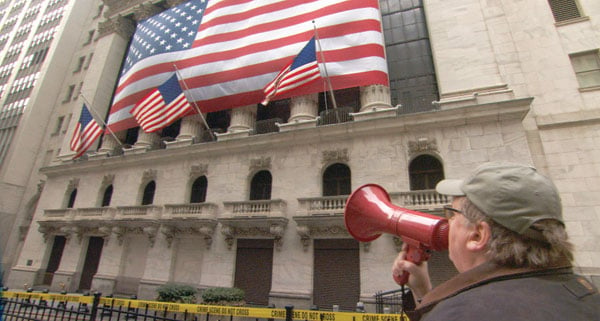 Saw the new Michael Moore documentary this afternoon. Capitalism: A Love Story. Love him or hate him, Moore is America’s most successful documentary filmmaker and the de-facto leader of the populist left. His filmmaking becomes more sophisticated with each outing, and this is arguably the best thing he’s ever done. For all it’s poetic licence, Sicko served as the definitive attack on private health insurance in the U.S. Now he takes on the whole shooting match with Capitalism: A Love Story. It’s the most sophisticated film of his career. Sure, it’s propaganda, but his own voice is less strident, and more wistful than ever. And despite the title, this is no ideological rant. While tiptoeing around the “socialist” bogeyman, he wages a thoroughly convincing polemic that pits capitalism against democracy. He dramatizes the atrocities of the financial collapse, the bailout and the epidemic of home foreclosures to drive home his point. It’s amazing what an agit-prop filmmaker can do with some serious resources. Moore digs up extraordinary revelations about “dead peasant” insurance taken out by major corporations that hope to profit from the early deaths of their employees—without their knowledge. It’s a scandal that deserves its own documentary. As usual, this film contains a lot of what the media likes to call “sob stories.” But Moore doesn’t patronize his subjects the way he used to. And for once he keeps his own rage (which can get ugly) under wraps. His signature guerrilla stunts are funny, effective and restrained. Taking dead aim at his main target, he exposes the obscene romance between Washington and and Wall Street with a fine balance of rapier wit and measured pathos. His most inspired touch: to finesse his argument by drafting F.D.R. onto his side. And here’s the thing: in the debate over Moore’s politics, his artistry as a filmmaker often gets overlooked. With Capitalism: A Love Story, it soars to new heights. His excavation and montage of archival gems is brilliant, as is his use of music and narration to underscore comic and tragic ironies. Moore is a consummate showman. Capitalism: A Love Story is a strange kind of romantic comedy. And perhaps the ultimate pathos that emerges at the end is his own isolation as the sad clown of anti-capitalism—a lonely voice with a powerful megaphone who’s still waiting for a movement to catch up to him.

For my ever-expanding list of TIFF favorites, go to: Best of the Fest