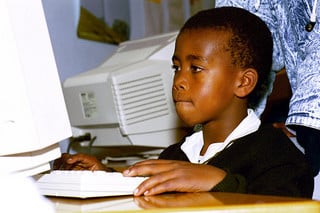 If you haven’t read a good dystopian tale like George Orwell’s 1984 lately, have a look at a new study on usage-based Internet billing from Microsoft and a couple of professors from the Georgia Institute of Technology.

The report tells of a number of families in South Africa that took part in the study, which sought to understand how the caps on monthly home broadband plans affected Internet usage. It’s bone-chilling stuff.

In South Africa, broadband speeds are still relatively slow, hitting a maximum of four megabits per second as of the study’s purview (2010). Usage caps, meanwhile, typically came in at between one and nine gigabytes per month, with unlimited plans only recently surfacing.

The report found that these restrictions–obviously heavy by Western standards–introduced three uncertainties to the families living with them: “invisible balances, mysterious processes and multiple users.” In a nutshell, the families didn’t know how to measure their usage and determine how close to their caps they were; which websites and applications used more data; and which household members were using more of the monthly allotment.

All of the 12 households reported regularly hitting their caps, which resulted in one of three things: counting down the days until the next month’s reset, topping up by buying more data, or finding Internet access elsewhere, sometimes by going over to a relative’s and using up their cap. In some cases, participants would run out of data in the middle of doing something, leaving them unable to finish a task. As one respondent said, this was enough to make one “psychotic.”

Participants talked about how they had to cut out Skype usage, limit how much their kids frequented Facebook and wait till the end of the month to go on a YouTube binge in the event that they had a data surplus.

In the second phase of the study, the researchers came up with some tools and suggestions that they thought might help the families manage their situations. The results of this phase are perhaps the most frightening part to Westerners, since the suggestions involved the horse-trading of gigabytes between family members, countdown-style clocks on the computer that ticked away usage in real-time, and allocation tables where the head of a household assigned each member a certain amount of monthly data.

One participant’s quote illustrated it all: “Just a few megs [megabytes] man. I need my fix, I promise I’ll pay you back next month.”

It’s all quite scary because, although the study is a look at Internet usage in a developing country, it is also a portent of what’s happening in so-called advanced economies, especially on the mobile side. In Canada, most Internet users have been living with relatively low or shrinking caps for years, despite the big growth of data-intensive applications such as Netflix and cloud services. The United States, meanwhile, is following suit with both home and mobile providers shrinking their caps as well. While unlimited caps are starting to spring up in places such as South Africa, North America is going the other way.

So, while the study is a report of reality in the developing world, it’s a snapshot of the sort of dystopian Internet future for North America I’ve written about before. Mobile users here already live with the sort of psychological usage barriers found in South Africa. Slowly but surely, those same limitations are creeping into home usage as well. And while ISPs and mobile providers cast the caps as necessary evils to fight network congestion, anyone with half a brain understands they’re being imposed to limit the growth of competing “over-the-top” services such as Netflix. (If spectrum scarcity complaints by U.S. providers have any leg to stand, surely any similar claims in Canada–which has one tenth the population–are laughable.)

Although framed as a proper scientific paper, the study was produced by Microsoft, which means it needs to be examined for self-interest. At first, it looked like it might make sense for the company to produce a study that cast data caps in a negative light; after all, Microsoft is increasingly becoming one of those over-the-top providers by selling media over Xbox Live, not to mention cloud services. On the other hand, the software giant has historically been “partner friendly,” meaning it rarely makes trouble for companies it does business with, which includes telecom and cable providers.

Indeed, it’s in the report’s conclusions that perhaps some of Microsoft’s interests become clear. Rather than focusing on the demand side, the authors accept that bandwidth constraints are here to stay and suggest it’s the supply side that needs to be rethought:

“Bandwidth caps are likely to persist as iSPs and other Internet providers use tiers and limits to manage infrastructural constraints… We suggest that the [content] community rethink assumptions about unlimited bandwidth in how we design our applications and devices to accommodate those who experience the internet via usage-based pricing.”

That’s not necessarily bad advice; after all, it’s smart to create services that use bandwidth more efficiently. It’s not unlike the global warming argument–even in the event that Al Gore is wrong, there’s no harm in in trying to use energy better.

But that assumption–and the study as a whole–doesn’t take into account the cost of providing bandwidth, a subject that was central to the vicious usage-based billing debate here in Canada last year. It’s also hard to read the report without wondering why Microsoft didn’t perform its study in Canada, where a good deal of literature was produced for those regulatory hearings. The conspiracy-minded might suggest it was to avoid ticking off its Canadian ISP partners.

Still, with the cost of bandwidth falling and mobile network engineers discrediting wireless operators’ claims that a spectrum shortage is in the offing–they say it would be like running out of a colour–it’s hard to accept continually shrinking data caps as a fait accompli.

One particular statement towards the end of Microsoft’s report may in fact explain what the company was trying to get at:

“Caps and other forms of usage-based pricing also push on the idea of cloud computing. Pushing data into the cloud adds to competition for network access and with capped billing, storing data locally becomes a more attractive choice.”

But of course. Microsoft might be making some money from cloud and over-the-top services, but the overwhelming majority of its bread and butter comes from elsewhere. Cloud computing and online media management eat up a good chunk of monthly data allotments, so why don’t we all just store our documents, photos and movies on a computer–running Windows, of course–like we did in the good old days?